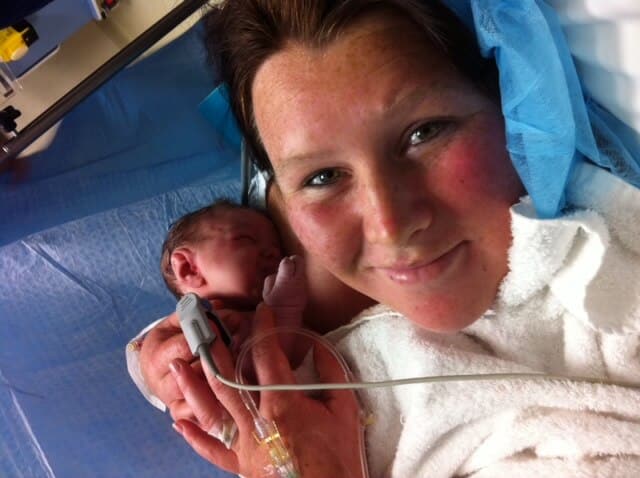 Well, things didn’t go quite as planned but thanks to Hypnobabies and a bit of concentration and focus, my new baby and I had a wonderful birth experience.
I came into hospital 12 days overdue on Tuesday evening and my birthing time began almost as soon as the first dose of prostaglandin gel went in (about 8pm) with birthing waves coming every 7 mins. I put on easy first stage and deepening and slept between waves  until 1am when i woke to the pop of my waters breaking and waves at 2 mins apart, lasting 40-50 seconds each.

The midwife came and checked me and I had gone from nothing to 4cm in 4 hours so I thought he was going to arrive soon! Waves stayed close together, increasing in intensity from then on.

At 6am I was up to 6cm, OB came in at 10am and I was 8cm.   Still completely in control although i was experiencing quite manageable discomfort, no worse than diarrhea type cramps i didn’t think, although much more intense. My 2 midwives (and 2 medical students) were amazed that I was laughing and joking in between waves and even asked for a copy of my birth video to show “how it can be done” and if I could speak to their antenatal classes! They were all very interested in Hypnobabies all of a sudden and said I was so focused and in the zone and 98% of women they’ve seen could not do what I was doing. All of this was making me even more confident.

I managed 22 hours active labour without medication very well, ahh-ing through contractions and leaning on my husband, but when I had stayed at 8cm for 7 hours we knew something was wrong and a quick ultrasound showed his 36cm head was flexed backwards and posterior and not going to come out of my pelvis the way it was. I’d been feeling intense downwards pressure with my waves which it turns out was his head pressing down on my ishcial spines but he would then go back up and couldn’t engage even with my 7 hours of powerful pressure waves. So it was decided after all this that a c-section was necessary to save both our lives.

I had previously been quite worried about a cesarian but when it all happened I was completely at peace that that was the way my birthing had to go for us and it was ok. I had a pressure wave while they were putting the spinal block in and the anesthesiologist could not believe I had been at 8cm for 7 hours and could just breathe the pressure out. I had also essentially been in transition for alot of that time too (shaking/shivering and vomiting) because my body was trying so hard to push baby down.

When he was born, he cried straight away, they bought him right over for skin to skin after they let my husband cut the cord and he latched onto the breast straight away. His name is Charlie and was born 8 pound 10 ounces at 6.40pm

Thanks to Hypnobabies, Charlie and I had a wonderful birth. I can almost guarantee that if we hadn’t done Hypnobabies, we both would have got distressed during the labour and I would not have been able to make such calm, informed decisions even in the event of an emergency.
Thanks Hypnobabies! Our birth video will be on YouTube in the next weeks and I’ll post the link here. I think I’ll be the only first-baby, induction, cesarian birth video on the web! 🙂

Thanks to Cindy from the Hypnobabies Yahoo Group for sharing her story with us!