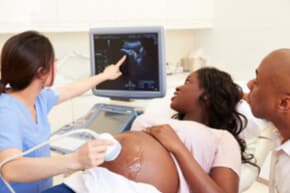 Are ultrasounds safe? Here is an informative article explaining the benefits and risks of ultrasound.

Ultrasound is an ultra high frequency sound wave—above the range of human hearing— that generates an image of the fetus in utero. From a transducer or a probe placed deep within the vagina (in early pregnancy) or on the surface of the abdomen (second and third trimesters), sound waves are emitted at millions of cycles per second. A pattern of echo waves creates a picture from a variety of surfaces—from fluid and soft tissues to a boney skeleton. Modern ultrasound energy intensities are higher than ultrasound of earlier decades. In obstetrics the following ultrasounds and energy exposures are used:

Ultrasound is used routinely and considered harmless by the medical profession, and for this reason risks are not discussed. In fact, it is presumed that use of ultrasound and the information it provides is considered valuable and desired by every woman. As with many of the tests and procedures during pregnancy, consider the risks, benefits and implications of the test.

Find more information on the benefits and risks of ultrasound HERE