“If you could describe a birthing time as easy, I believe this would be it. It was perfect!” 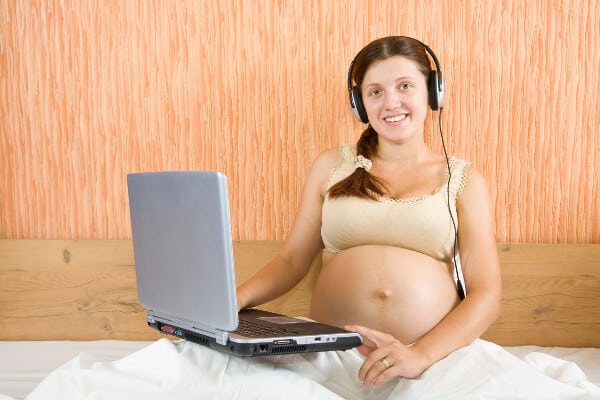 First Hypno-Baby’s Birthing:
I have used Hypnobabies with both of my sons and I have LOVED the program. I did the Home study course for both births.
My first son was a successful [vaginal] Breech birth. I had a horrible experience during my pregnancy with a Doctor who was not supportive of my choice for a natural birth and who never volunteered information. He didn’t tell me my baby was breech until I asked what position he was in (at about 30 weeks) and when I asked him what I could do to get the baby turned, his response was “We’ll just wait and see what happens. If he doesn’t turn, we’ll do a C-Section”.
It was then that I realized I needed to take control of my pregnancy and, in my search to learn what I could do to get my baby to turn, I found the Hypnobabies Childbirth Hypnosis program (at 32 weeks). I tried EVERYTHING in the book to get him to turn! I would feel him rotate a little and then go right back. On my due date I went in for an appointment and my Doctor made me schedule a C-Section around his vacation. That was the last straw. I fired him and found a new provider that would be supportive of the birth I wanted. It was then that I learned that my baby couldn’t turn because I had extremely low amniotic fluid.
My sweet little one made his appearance at 40 weeks 5 days. My “water broke” at hour 4 and he was born at hour 23 – both of us healthy and happy. My providers did not have much experience with the Hypnobabies program and they were all amazed at how relaxed and peaceful I was due to my childbirth hypnosis practice during the entire process. Because I wasn’t making a bunch of noise, they were worried I wasn’t progressing at all. But everytime they checked, I had progressed. It was 23 hours of hard work – mentally and physically – but it was completely worth it!
Second Hypno-Baby’s birth:
My second son was born 7 weeks ago in the comfort of our home. I began having mild pressure waves at 11pm. I would have been able to sleep through them for the most part, except that my 2 year old was sick so I was up with him a lot of the night. For the next 20 hours, I consistently had a pressure wave that would last for only 20 to 30 seconds and came every 15 to 30 minutes. By that standard, it was not considered “active labor.”
I had called my mom and midwife in the morning to let them know that I thought the baby would be coming that day, but I told them to hold off on coming until my pressure waves progressed. My husband and I went about our usual daily activities. At about 3pm, the timing of my waves had still not changed – although the pressure seamed to be greater – so we decided to go for a walk to try to get things moving along. I would just stop to relax and enter eyes-open childbirth hypnosis (while standing) every time a pressure wave would come.
When we got back I was extremely frustrated that nothing had changed, so I called my midwife and asked her what to do. I had a pressure wave while on the phone with her and it was so short that she said my waves sounded more like a Charlie Horse than pressure waves. She volunteered to come to my house and help me either get things progressing, or stop them. And she was really thinking that they would stop altogether when I got in the pool. However, when she got to my house – around 7pm – she checked me and I was 8 cm dilated, and 90% effaced!
So she got me in the pool and then things picked up right away. I spent the rest of the time in the pool – choosing for myself when and how to change positions. I did a lot of kneeling and squatting to utilize gravity. At 11:30pm my midwife asked if the pressure waves were intense (she couldn’t tell because I was so relaxed and deeply in hypnosis) and I said yes – that they were almost constant and I believed I was in transformation.
She asked if I wanted her to break my water. I felt like I could get him here fast if my waters would just break so I said yes. She did and I immediately had the urge to push. He was in my arms a short 14 minutes later – again, both of us perfectly healthy and happy. He was born in the pool, with my husband in the pool to catch him. It was wonderful.
So, my total birthing time was 25 hours, but only 4 hours of it felt like “active labor”. I am positive that I was able to progress so much throughout the day, despite the pressure waves being short and spread out, because of my hypnosis, relaxation and visualization. I tried to stay upright as much as possible, to let gravity to do the work, and with each wave a visualized my cervix opening and my baby moving down. That, and “mooing” were the things that were most helpful for me with this birth.
With my first baby, my most utilized Hypnobabies tool was creating anesthesia. So my focus for each birth changed based on what I felt I needed.
My midwives said that this second birth is one of the smoothest births they have ever seen. They were both extremely excited about how great it went and have both blogged about it. If you could describe a birthing time as easy, I believe this would be it. It was perfect! I recommend the Hypnobabies Childbirth Hypnosis program to every expectant mother I know!
Hypnobabies thanks Laurie Brown for sharing her stories with us!