“PEACE was my favorite word. I would start saying PEACE (Hypnobabies cue for instant physical comfort) when I would feel a wave (Hypnobabies word for contraction) coming and it was amazing I could feel my body breathe down and release the tension.”

Joshua Taylor was born May 26th at 10:43am at home, after a quick 3 hour birthing time (Hypnobabies word for labor).
This was my first home birth. My previous 2 were not ideal hospital births with an epidural.

My body had been preparing for a while before his birthday. I was having Braxton hicks for about a month. I woke up about 7:30 am and went to my living room to sit with my birthing ball during pressure waves. my kids got up and came out and started watching cartoons. I would say my waves were about 10 – 15 minutes apart. I tried not to think much of them since I didn’t want to get too excited if it wasn’t the real thing.

About an hour went by and they were getting stronger, so I went back to my room told my husband to get up because I wasn’t feeling good. I told him he might want to find someone to watch the kids today. I laid back down and put my headphones in and started listening to my tracks. I came in and out of “sleep” and when I would have a pressure wave (Hypnobabies word for contraction) It was getting harder to stay focused in my hypnosis. I honestly was getting scared because after about an hour I knew it was the real thing. I knew it would only get more intense from here. I called for my husband and started to tear up. He knew then it was birthing day. He reassured me that I would be great, and I felt better. I told him he needed to stay with me. He called his mom to pick up the kids and went to pack their stuff. It felt like she was taking forever to come get them. I guess it was only about 20 minutes. 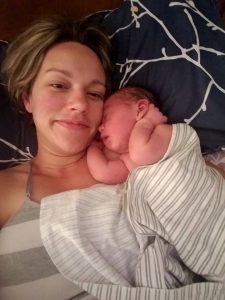 I thought for sure I would be in my birthing time for many more hours since it was so early in the morning still. I planned on calling my mom to come over when I felt like the waves were about to pick up and get stronger. When my MIL got here my waves were getting more intense and difficult for me to relax. PEACE was my favorite word. I would start saying PEACE when I would feel a wave coming and it was amazing I could feel my body breathe down and release the tension. Which allowed me to get through this time. I felt like I had to go pee and told my husband I wouldn’t get up, so I tried to just go since I still had my underwear on with a pad. The pressure to pee was sooo bad but I couldn’t move. The only position that was comfortable was to be limp on my side. I tried to get on my ball and that was baaaad! So, I got back in bed and laid on my side. I felt an involuntary push and let out an aghhh. Not painful just my body doing what it was supposed to. I told hubby call the midwife.

My mother in law was still here getting my kids things ready. Idk what the heck she was doing but I felt like she was taking forever. My husband gets on the phone with the midwife and she starts asking how far apart they are. Meanwhile I’m having another birthing wave and involuntary push, she says ok I’m on my 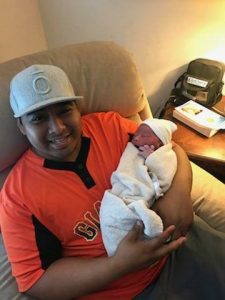 way. My kids come in to tell me bye and I yelled go away. They leave and I tell my husband he is coming. My body just started pushing him out without any effort of mine. He pulled off my underwear and his head was crowning. I had another push and I reached down and felt his head. Then another involuntary push and his head was out. 2 or 3 more and he just slipped out. My husband caught our son and handed him to Me!

No one was there just my husband and I. Midwife was on speaker and told my husband just catch the baby. You don’t need to do anything. Just like that! It was an incredible healing experience for both my husband and I! Just the two of us where it all started.

I had planned a water birth but there was no time and I don’t think I could Have held myself up. It was incredibly fast but exactly what I prayed for. 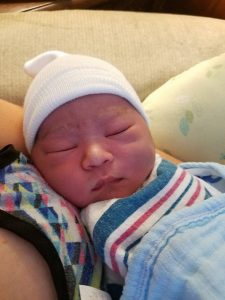