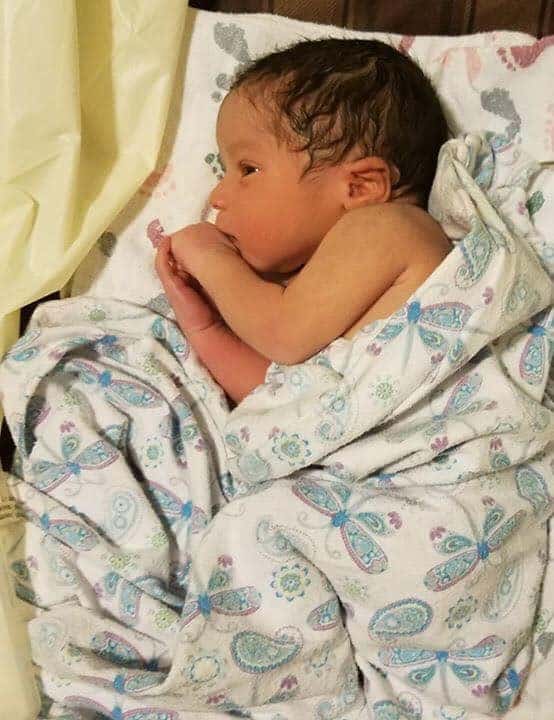 “The most amazing thing happened when the Hypnobabies hypnosis tracks started to play. As soon as the opening notes of the music started I felt a wave of relaxation pass over me. I immediately felt like I had fallen asleep.”

For the maintenance week I actually placed all the tracks for maintenance week on a playlist, and would start my list with the weekly one listed, but then let them all play in a loop. If I woke up in the middle of the night I would just restart whatever hypnosis track it was on, and drift back to sleep.

I used the Relax and Peace cues (Hypnobabies techniques to deepen hypnosis and create instant physical comfort) a lot. I had a hard time remembering to flip my mental light-switch (Hypnobabies tool for entering hypnosis), but really I think I did it subconsciously because during the peaks of waves (Hypnobabies word for contraction) I felt so much different than I did between them. 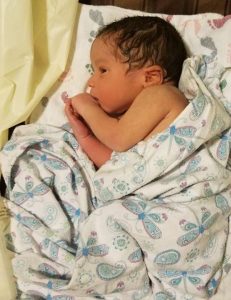 My first child was a planned homebirth with a midwife. We were planning on doing the Hypnobabies home course later into the pregnancy. We were both first time parents, but we knew birthing in a hospital with doctors wasn’t for us. Unfortunately, our daughter had other plans, and was born premature via emergency c-section at 27 weeks to what doctors suspect was incompetent cervix, although they could never confirm it. I was hesitant to try for another baby after having a 73 day NICU experience with my first. When I finally felt mentally ready to have another child we went through extensive testing to insure that my body could not only conceive again, but carry to term. We never did find definitive proof of incompetent cervix.

Because of having my first child early, this pregnancy, I was considered high risk. I was able to work with the midwife group at the hospital because I wanted to have a VBAC, and also needed to work with a Maternal Fetal Medicine doctor to follow the pregnancy. They started me on Makena progesterone injections, and biweekly ultrasounds/cervical length checks. Everything looked good, and as we neared 24 weeks I was panicking. The doctors were adamant that weekly injections were enough, they would not continue cervical length checks, and had no plans of doing any further interventions. At one point the MFM doctor said, “I’m really only concerned with getting you to 35 weeks.” That’s not really something you want to hear after experiencing the NICU the first time around. I still was able to see the midwives so I felt slightly ok.

Fast forward to 32 weeks and talks of birthing plans started. I was told my water would be broken, and because of my weight an internal fetal monitor would be placed. I was staunchly against both of these things. That day I found a midwife outside of the hospital and explained my situation. She told me to continue following with the hospital midwives, and that later into the pregnancy she would take over my care, and I could birth at home.

35 weeks came and went, and baby stayed in! By now I was on week 5 of the Hypnobabies course, and I had switched care to the out of hospital midwife. At 37 weeks she came to my home to do my prenatal visit and noted that there was some protein in my urine. This was bothersome as up to this point this had been a “perfect” pregnancy with low weight gain, no GD, and no preeclampsia. That night I skipped the normal maintenance track. I went into my special safe place and had a heart to heart talk with the baby. I explained to him that if the protein got too high I would have to be transferred back to the hospital for birth. I explained that I wanted him birthed at home surrounded by loving people in our inviting environment. I told him we had put the Christmas tree up, and that if he was ready I was ready for him. I told him that Sunday (two days from then) was my birthday, and I’d love for him to be here for it.

The next morning at 5 am I awoke to pressure waves that were 5-6 minutes apart lasting for 1-2 minutes. I was so excited that he was ready to make his entrance. I sent a text to my doula, midwife, and photographer letting them know I might be asking them to come over soon. I put on my birthing time tracks and settled into the chair to progress in peace. Around 7 am our daughter woke up, so I asked my husband to have his parents come get her. They arrived around 8 am, and I had my husband set the pool up. By now the pressure waves hadn’t increased, but with the frequency I was certain things were getting ready.

My doula came over around 11 am, and that’s when everything stalled. I was so discouraged, but my doula was very determined and positive. She used the rebozo to try and maintain baby’s positioning, walked around the block with me several times, and encouraged me to dance and do squats in the living room. Nothing worked! I finally told her I was going to put on my Hypnobabies tracks and take a nap just in case. I slept for about 2 hours, and nothing happened! Around 6:30 pm I asked if she wanted to go to Walgreens to grab some snacks since she had been there all day I felt she deserved a treat. We walked around Walgreens for about 20 minutes. I told her I was going to the restroom and would be back. While washing my hands out of nowhere my water broke! I wasn’t quite sure, but my doula (who has 7 kids of her own) informed me it was definitely my water, and now the countdown to baby would begin. On the drive back home I started getting some intense pressure waves.

At home my doula encouraged me to listen to my tracks, but for some reason I really did’t want to! I could hear the track’s scripts playing in my head as I walked around the house, got in the shower, squatted through pressure waves, and tried to nap on the bed. My husband kept encouraging me to listen to the tracks as well, and I was being so stubborn! I wanted silence! I got in the birth tub around midnight after my doula and husband wished me a happy birthday. While in there the pressure waves, were getting intense, but still tolerable. My doula began timing them, and they stayed consistent. I started to feel like baby was head down but trying to turn. I asked my doula to call the midwife, and then asked my husband to call the photographer. This was around 2 am.

They both arrived around the same time. At this time my pressure waves were coming about every 2-3 minutes. I asked my midwife to check me because I needed reassurance the baby was still head down. I knew I could do this if he just remained head down! She informed me that yes, my water had broken as she could feel his hair, I was 3-4 cm dilated, and 80% effaced. She said, “Don’t let that discourage you. Let’s go sit on the toilet for a few.” By this time, I couldn’t really talk through the waves, but I wanted to tell her thank-you for the reassurance. While sitting upright my doula again suggested the tracks. This time I said yes. I knew I needed that additional push. My husband went and got my iPad and earbuds and handed them to me. He knows I’m a hands-off person in moments of stress, so he stood by me, and just got in complete sync with my needs. The most amazing thing happened when the tracks started to play. As soon as the opening notes of the music started I felt a wave of relaxation pass over me. I immediately felt like I had fallen asleep. I could hear the words, but they weren’t registering. I talked to the baby. I told him I was ready for him. I thanked him for staying in position and helping me make his transition earth side a bearable one. I told him I had milk out here for him when he was ready.

They brought me a pillow to rest my head between waves. As a pressure wave (contraction) hit my husband would grab the pillow, and I would rock through them. Once the wave had passed he would put the pillow back. It felt like surfing a wave at the beach. You could almost see the peak of the wave, and then just ride it back down. I don’t know how long I sat like that (later I learned it was about an hour). Suddenly something said, “You need to get in the water.” I asked my husband to help me to the tub. A wave hit on the way, and I was able to stand and ride it until it passed. My husband put the Hypnobabies tracks on the tv and let them play out loud. Other than the soft sounds of the Birthing Day tracks in the background it was silent, calm, and peaceful. While in the tub I had a few more waves. I kept my eyes closed, and just focused on relaxing. I was softly pushing and visualizing him coming down past my pelvic bone. Again something said, “It’s time to go. Put on your Pushing Baby Out track.” I asked my husband to change to the track. It’s funny when you’re listening to something, but not really hearing the words. I don’t remember anything else about that track except, “Sometimes when women push they make sounds in their throats that sound animalistic and help the baby come down. This is ok.” I realized that I was closing my throat, and by doing so I was keeping him from coming down. I opened my mouth and forced sound to come out, any sound, I didn’t care what. What felt like 2 mins passed and I calmly said, “His head is out.” I remember wondering if I needed to do anything else, and then thought, “I’ll just give a small push and see what happens.” He popped out all the way, and I pulled him out of the water. He was so little, hairy, and covered in vernix, but he was perfect, whole, and mine. I pushed him out in 15 minutes, and no tears just like I had visualized. He was born at 4:04 am, 38 weeks to the day, 5lbs 3oz, and 18.5 inches. We did it! All of us worked in sync like clockwork. This was an amazing experience. Getting to not only birth on my terms, but in the comfort of my own home surrounded by loving people was amazing. I wouldn’t change anything!

If you ever doubt these tracks work, don’t. I only listened to my tracks before bedtime. I would put the daily track on repeat and listen to it all night while asleep. It’s hard to get 30-40 minutes of quiet time with a busy 3-year-old at home. Could I have shortened this process by listening to the tracks the entire time? Possibly, but they were perfection when I needed them most. I still use my hypnosis cues during the uterine waves from breastfeeding. I told my therapist about the program, and she has since recommended it to her other pregnant clients.