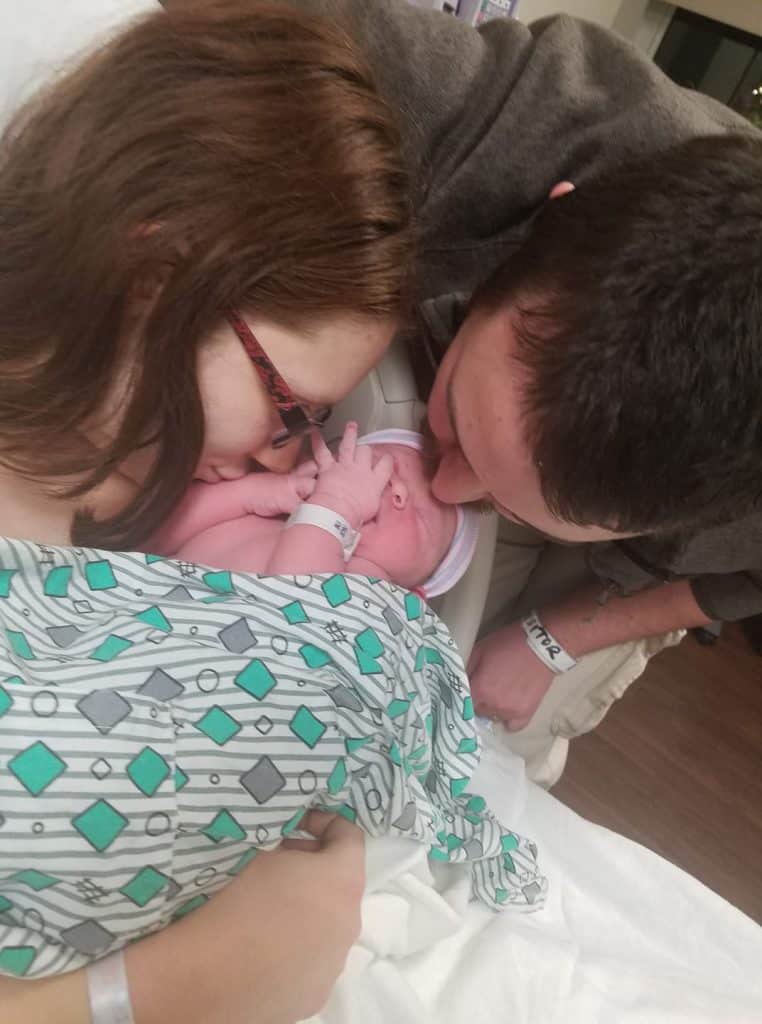 “Several pushes later my husband caught our daughter at what we are guessing to be 9:38 pm on 10/14 on our living room floor before EMS arrived. She immediately began to cry and pink up.” 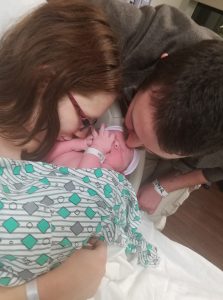 This was my second birth but first hypno-baby. My first was born at 36+2 and needed to be induced due to my membranes rupturing so I was really concerned about my water breaking with this one as well especially because I tested positive for GBS. My husband and I had made two trips to the triage thinking it was baby time (pressure waves 4-5 minutes apart and lasting longer than a minute) only to be told no change in an hour and sent home. My first was born really quickly and I knew this one would be similar.

On my daughter’s birth day I had a lot of hip pain (had been fairly common throughout this pregnancy for me) and occasional pressure waves that thinking about now did feel slightly different from previously. I thought my water broke at around 8 pm but was hesitant to believe my instincts as I had thought the same both of our previous trips. So I took a shower (even shaved my legs because I didn’t want to get out of the water because it made my hips feel better) because the pressure waves (Hypnobabies term for contractions) still didn’t seem any stronger than the last time and started Birthing Day Affirmations. My husband (thank heavens) called my sister-in-law to come watch our 1st while I was in the shower by the time I was done in the shower. I knew we needed to go to the hospital when I got out, so I told my husband and then laid down and started the Fear Clearing track (Hypnobabies track to release any fears).

We were at this point just waiting on my sister-in-law. I got part way through Fear Clearing and realized I needed something more, so I started Easy First Stage (Hypnobabies main birthing time track) (this I believe is where my transformation stage started). My pressure waves at this point weren’t pain-free but were still manageable to me. I realized I had to poo, so I did just as my sister-in-law was arriving I popped up to the bathroom and started feeling pushy and KNEW that we weren’t going to make it to the hospital. I made it back down the stairs as my husband was finishing pulling the car out. He was asking my sister-in-law to call the hospital and let them know we were on our way because he knew our baby was coming fast. I stopped him and told her to call EMS instead and hurriedly took off my underwear. My husband looked and saw my daughters head and abruptly also told her to call EMS and grabbed some towels. I at about this point took off my headphones because I knew I was going to need to be alert and answer questions and things.

Several pushes later my husband caught our daughter at what we are guessing to be 9:38 pm on 10/14 on our living room floor before EMS arrived. She immediately began to cry and pink up. And not too long later EMS arrived and there were sooo many people in my living room. I got taken to the closest hospital (which funnily enough my OBGYN doesn’t deliver at so we weren’t planning on using). And had my placenta birthed mostly naturally. There were still some clots and little pieces, so I got IM Pitocin because it was an issue with my first. And a few stitches probably in the same place I tore with my first. It was an exciting night and I dealt with it all calmly and without fear due largely due to Hypnobabies and all unmedicated (aside from the lidocaine for the stitches).