“Thanks to Hypnobabies, I was able to make informed choices and be so joyful and peaceful during my birthing time.” 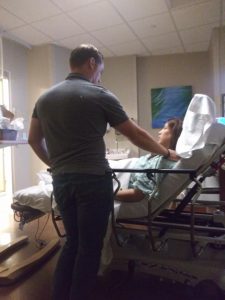 We tried different positions the last few weeks & the pool, etc. etc. to dislodge her bottom from being engaged, but she never budged.

I immediately turned on the Turn Your Breech Baby track (Hypnobabies track to encourage a breech baby to turn) as a last-ditch effort, but as more and more water came, I knew she wouldn’t be able to turn on her own anyway. I started getting ready but knew I had time, I just felt pressure every 10 minutes or so it seemed like. Come to find out, these were full pressure waves (Hypnobabies word for contractions), but it just felt like pressure. 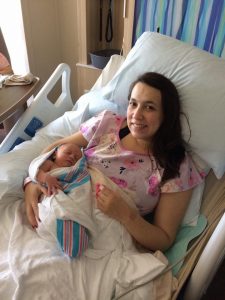 We arrived around 7 am if I remember correctly. My doula arrived shortly after. I listened to Your Birthing Time Begins and then Easy Comfortable Childbirth on the way. I was having what I didn’t realize fully at the time we’re full-on pressure waves closer together now.

Through all of these waves, for me what worked best was to use my finger drop technique (Hypnobabies technique to enter hypnosis) or my Release cue (Hypnobabies cue to instantly enter hypnosis) and imagine my hypno-anesthesia as an orange inner tube around my lower back/bottom & pelvic area. I was excited to see how they felt and get a chance to experience this time in my birthing. I was amazed at how mild everything was to me, but it was because of the hypnosis!! So cool!!! 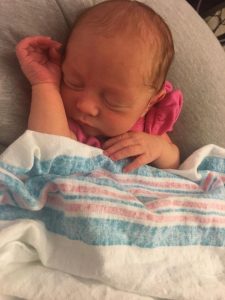 He said most of his patients flail or move or panic before during and after the spinal but that he was impressed with how calm I was as I used my finger drop and other cues through it. I switched to eyes open during it actually because he needed to communicate with me on the positioning etc.