“In just a few moments after I arrived in the room baby’s head was out! The doctor ran into the room after that and helped my husband catch the rest of her as she was born! I “pushed” for a total of 7 minutes and she was born at 5:52 pm!”

This was my third birth, a VBAC, and my first Hypnobabies birth. First baby was a long and tiring birth that lasted 32 1/2 hours at 37 weeks. I did end up with an epidural during that birth after I made it to 9cm and got stuck there. Second baby was an emergency c-section at 35 weeks. It was very rough on me mentally and I had a hard recovery. 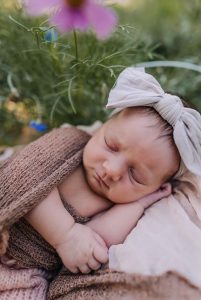 This birth was nothing but amazing! Thank you, Hypnobabies!
I had a bit of an emotional week during week 38 of my pregnancy as I was feeling very tired and so ready to have my baby. I had never been that pregnant before, and this was my most uncomfortable pregnancy as I dealt with SPD this time.

At 38 weeks, 6 days, I started to experience some practice birthing waves (Hypnobabies term for contractions). I just listened to my maintenance tracks and pretended everything was normal since the waves were very light and would die down after several hours. This continued for 4 more days and I had thought a few times that my birthing time (Hypnobabies term for labor) had really begun and I listened to my birthing day affirmations and Easy First Stage (Hypnobabies main birthing day track) a few times. But then the waves would die down and I’d go about my day as normal.

On Tuesday, the 16th of June, at 39 weeks and 2 days, I had a prenatal appointment scheduled in the morning. My OB/hospital was an hour and a half away from where I live due to me wanting a VBAC and needing a supportive provider. So, I had my husband take off work and drive me into the appointment since I was still having pressure waves. It was great because I got to just listen to my tracks and rest on the ride up there. We also had to bring along our 3 and 1 year old. At the office, I consented to a cervical check since so much had been happening. I was just a little surprised when I was told that I was dilated to a 6!

I was told to go straight to Labor and Delivery, but I just didn’t feel ready… plus we had the kids and I had stuff I wanted to finish getting ready at home with our animals (chickens, geese, and dogs). So, we grabbed lunch with the kids and headed back home! Pressure waves continued at home, but we were able to get everything ready and had a friend come over and watch the kids. I started to get a little irritable at home and was ready to head back to the hospital! I was listening to my tracks the whole time and was trying my best to not talk to anyone too much but just do what I needed to do to get ready to go. We left our house a little after 3 pm. I took a light nap for most of the way. And we stopped halfway at Tropical Smoothie Cafe for smoothies. 😉

When we got to the hospital at almost 5 pm, I was having to really focus on breathing through the waves but was still feeling pretty comfortable and like I probably had several more hours to go. At triage I was checked again and was still at a 6. Yay. I felt a little disappointed and thought to myself that I was probably going to be in my birthing time all night!

At exactly 5:30, my water broke in the triage room and a whirlwind started. Things got very intense. I was still listening to Easy First Stage, but it was taking all my energy to focus on the track and on relaxing. The nurses came in and asked me about getting in a wheelchair to go to the L&D room. I think I just said, “I don’t know” and they pretty much immediately started wheeling (running) me up to the next floor to my room. I started feeling so much pressure on the way up there and I just wanted to be up and out of the bed. I had rolled to my side, but I wanted to be up!

When we got to the room, I crawled onto the new bed while flinging off my gown. I stayed facing the top of the bed, which was raised, and held onto the back of the bed while sitting up on my knees. I felt sooo much intense pressure and realized that my body was pushing! I got tangled up in my headphones somehow and ended up ripping them off. I did manage to turn on the Pushing Baby Out track (Hypnobabies track just for pushing), but I think I only heard two words. My husband did use the Relax cue (Hypnobabies cue to deepen level of hypnosis) on me. I heard it and felt better but still was screaming. I was trying so hard not to push because the doctor wasn’t there, and I also wanted the baby to come out as gently as possible… she had other plans.

In just a few moments after I arrived in the room baby’s head was out! The doctor ran into the room after that and helped my husband catch the rest of her as she was born! I “pushed” for a total of 7 minutes and she was born at 5:52 pm! I did end up with a second-degree tear, but that’s my only complaint. We did delayed cord clamping, she didn’t leave my arms for at least an hour, and we waited at least an hour to do any of the weighing and measurements!

This was the most healing birth experience that I could ever have hoped for. So many things that I had envisioned came true and we spent only about 27 hours in the hospital total! (My last birth, I spent 34 DAYS in the hospital!). I feel so blessed to have had the Hypnobabies resources for this birth.