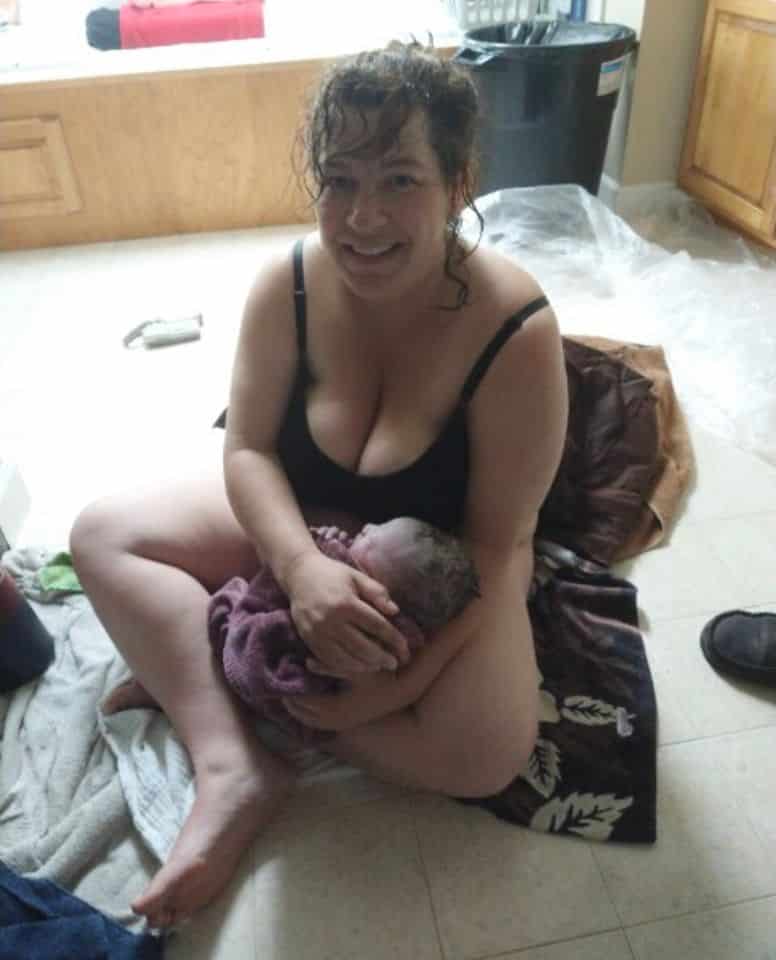 “I realized I’d need my midwife to come catch the baby because I was too focused on what I was doing to grab the baby. So, I yelled for her, and she came in right away. She needed me to move out of the shower some so she could reach, but the best I could do was just stick my butt out of the shower, so I was half in and half out.”

This was my third Hypnobabies birth and fourth baby (last birth was twins). 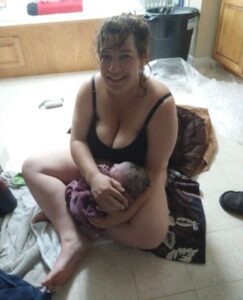 It was planned to be my first home birth, but as we got closer to 42 weeks, I started to worry we might not make it within the window we needed.

Once I reached 10 days past my guess day, I was around 4cm and almost totally effaced, and had been for days. So, I decided to have my midwife break my water at home to get things moving at 9:59am.

After that I went for a walk and spent some time on the birth ball. Around 11:48am I started timing pressure waves (Hypnobabies term for contractions), which quickly got to 1 minute long and 2-4 minutes apart.

By about 1:30pm I let my doula and midwife know I was ready for them to come since things were getting intense. I had to focus through each wave and had started vocalizing some.

They both arrived between 2-2:30ish, and when my midwife checked me, I was just at 5cm… but it felt a lot more intense than 5cm. At first, I felt a little discouraged that I wasn’t a little more dilated, but I knew that things could happen quickly and had a feeling it would.

I had a hard time finding a comfortable position, but the shower seemed to work the best. So, I spent most of my time in there, even though I had planned for a water birth in the tub.

Transformation (Hypnobabies term for transition) was the most challenging part of this birth. I couldn’t find a comfortable position to get into to turn off my light switch (Hypnobabies tool for entering hypnosis) or totally release. And every time I tried changing position it triggered a wave.

It was probably the most intense of my births, even more so than the twins.

And while I wasn’t able to fully release and relax the whole time, I was able to really pay attention to my cervix and not tensing muscles in and around my abdomen during and leading up to transformation.

I specifically remember releasing my pelvic floor muscles through each wave and imagining the orange hypno-anesthesia and it definitely helped!

I’m guessing around 4pm I started truly pushing. Before that I had pushed a little just because it made me feel better, but it wasn’t until around 4 that I felt like really pushing. This was the first birth where I truly felt the urge to push on my own without coaching, which was so cool.

At this point I was alone in my shower, with my doula checking on me every few minutes.

I wasn’t sure how close I was to actually pushing the baby out until after like 3-5 intense waves with pushing I realized I was feeling some discomfort and stretching… but I was sooo happy to feel that because I knew we were almost there. I didn’t even have time to put on the Pushing Baby Out track (Hypnobabies track just for pushing).

Until then I hadn’t let anyone know I was really pushing because I wasn’t totally sure… though I’m pretty sure they could tell! I was very vocal this birth.

I realized I’d need my midwife to come catch the baby because I was too focused on what I was doing to grab the baby. So, I yelled for her, and she came in right away. She needed me to move out of the shower some so she could reach, but the best I could do was just stick my butt out of the shower, so I was half in and half out.

Then with one huge wave and a long push she came out at 4:11!

Entire birth from when she broke my water to when baby was born was just about 6 hours, but only about 2 hours was really active or intense.

I cut the cord myself… then placenta came out easily and I only had a small tear even though she was 10lbs8oz, which was a surprise! We did not know she would be so big. If I would have been more patient pushing, I probably wouldn’t have torn but I just wanted her out asap.

She SCREAMED for like 20 minutes after coming out. She is apparently very outspoken and opinionated already.

But finally, she latched on and nursed which calmed her down.

I’m feeling great! Already mostly healed and getting back into a normal routine.

If I could change one thing, I would have taken time at the beginning of my birthing time to really lay down and go through the deepening track.

However, things progressed so quickly that I didn’t really get the chance to get as deeply into hypnosis as I could have and that would have helped me remain more comfortable, I think.

I had been listening to tracks from the beginning, but I was so focused on walking and bouncing on the ball that they were more in the background than having my full attention.

But I did stay pretty calm and focused throughout and my doula said it was one of the most intuitive births she’s seen and that I really followed my body and my instincts.

So overall it was an amazing birth!