Magnificent Hypnobabies Birth Despite a Change of Plans 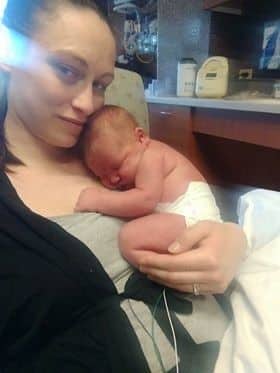 Magnificent Hypnobabies Birth Despite a Change of Plans

“As birthing went on through the afternoon things were very relaxing. I had one headphone in and my hypno-doula had the Relaxation music playing peacefully in the background. All of a sudden I went to the bathroom and when I came out I felt like I had traveled to some other dimension. I was inside myself. I had entered transformation (Hypnobabies word for transition).” 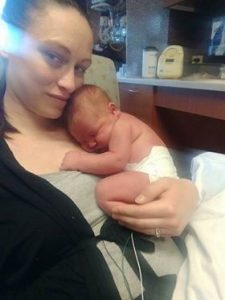 My pregnancy was “high risk”. I am a type 1 diabetic – I have been for 22 years. Because of diabetes, I ended up having polyhydramnios – which is a fancy term for too high level of amniotic fluid volume. I was measuring very large because of the increased fluid volume. At 38 weeks my fundus measurement was 46. Typically the number of weeks matches the measurement. Not so big of a deal but if my water were to spontaneously rupture it ran the risk of possible cord prolapse or placental abruption. Doing my Hypnobabies tracks daily helped me cope with these scary possibilities. I was able to stay calm and focused on having a very peaceful birthing time instead of being trapped by fear.

On Monday, January 15th I went in for an induction at 8:30 pm. I was 38 weeks and 2 days. We decided to induce because since diabetes is an autoimmune disease there is a risk that after 38 weeks the body can have an autoimmune response to the placenta. If that happens baby doesn’t get the vital care that’s provided by the placenta. Our plan was to use a cervical ripening balloon. Well, this was our first change of plans. I was already 2.5cm dilated and the balloon only helps open to 4cm. It would’ve been basically a waste of time. So we opted to start Pitocin at 11 pm. I put on my Birthing Day Affirmations track with 1 headphone in and decided to make the most of our birthing that would soon begin.

I listened to my Joyful Pregnancy Affirmations track throughout pregnancy on repeat in my car. I was confident that we would have the birth that was intended for us. I wanted a VBAC. I was focused on having my VBAC. As the night went on my birthing waves continued but I wasn’t feeling much of anything. They increased Pitocin slowly because of the previous C-Section to reduce the risk of uterine rupture. I told my husband to put on Lord of the Rings so we could lay back and relax to save up our energy for the big moment. I continued to keep my headphones in my ear and managed to sleep most of the night. I felt well-rested and ready when I woke in the morning.

As the morning continued one of the OB-GYN’s from the practice I go to came in and rained on my parade at 8 am. He came in and told me that I basically had a 5% chance of birthing vaginally. I rolled my eyes and said thanks for the input. I wasn’t about to let anyone tell me what I would or would not be able to do. I was going to prove it to myself. He also said that because of my fluid being so high the Pitocin induced birthing waves weren’t being as strong and productive as they could be and his recommendation would be to break the water. I told him I wanted to call for my hypno-doula and once she arrived we could break the waters. At 10 am we broke my waters. I had originally intended for baby to break it but plans change and I was going to roll with the tide. Nothing was going to bring me down.

As birthing went on through the afternoon things were very relaxing. I had one headphone in listening to Easy First Stage (Hypnobabies’ main birthing time track) and my hypno-doula had the Relaxation music playing peacefully in the background. All of a sudden I went to the bathroom and when I came out I felt like I had traveled to some other dimension. I was inside of myself. I had entered transformation (Hypnobabies word for transition). I was set on having an un-medicated birth. So I used my Hypnobabies cues like Peace and Relax and we used the birthing ball, standing, swaying, rocking, counter pressure. It was all very helpful. Listening to my Birthing Day tracks and staying in the center (Hypnobabies technique of being in hypnosis with eyes open) helped me listen to myself – something I hadn’t done with my first birthing.

I decided that I wanted to forgo my plan of un-medicated. As a diabetic I could feel myself becoming depleted. I was tiring myself out. I was able to eat and drink but I had to keep my blood sugars under a certain level and it was a lot of physical work and emotional strain. My goal was a healthy, vaginally birthed baby to a mom who wasn’t too spent from birthing to nurse until baby was satisfied. I finished out transformation with laughing gas which worked quickly and wore off quickly. I decided to get the epidural. My decision for this was based on letting my body and my baby work down naturally so I could conserve my energy for pushing the baby out. 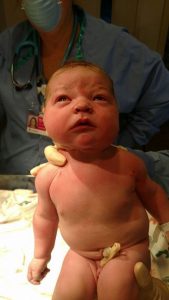 A few hours later after being at 10cm for 2 of those hours, we decided it was time to push. We put on the Pushing Baby Out track (Hypnobabies track just for pushing). I told my husband to put on Lord of the Rings again. I said “If Frodo can get to Mordor without shoes…I can and I will push this baby out!” That gave everyone in the room a good laugh including myself. I was determined! My first birthing I pushed for 3 hours without any progress baby didn’t engage in the pelvis. This birthing would be different! And it was!

This birthing time was going to be beautiful. I pushed on my sides 15 min intervals at a time and switched from aide to side to decrease potential swelling. The baby was making it down! I was filled with joy and confidence! They brought in a mirror so I could watch my baby coming down. I could see hair – so much baby hair! Well change of plans, the baby was now “stuck”. My provider would not do a vacuum or forceps delivery because of the risk of shoulder and head and brain injury. I respect that choice.

It was C-Section time again. I cried. I wasn’t ready for this 180. I asked to push for another 30 minutes. Squatting this time. The baby wasn’t coming. Frodo made it to Mordor without me pushing my baby out. My hypno-doula and husband jumped into the change of plans mode and everyone in the room. Every single person came over and told me how proud they were of me. I had a new resolve. I was going to make the best of this C-Section birthing time (Hypnobabies word for labor) for me and my baby!

I decided to stay in the center. I was only going to open my eyes if needed and only to see my baby. I was going to visualize my birth as beautiful and meaningful and peaceful. Perfect for both of us. So after vomiting, a few times (I ate a lot of popsicles while pushing) and the help of a vacuum-assisted C-section my baby boy was finally earthside! He took 5 days in the NICU for hypoglycemia but we are home, happy, and healthy!

Thank you for Hypnobabies. I firmly believe that I was able to have the beautiful birthing I desired because of the retraining I gained from listening to the tracks. After my first birth, I felt let down. Like I didn’t do my job as a mom properly. This time around I feel whole, healed, positive, and I know that this was the exact birth we were destined to have. If we have another baby in the future I will absolutely be using Hypnobabies again 💙