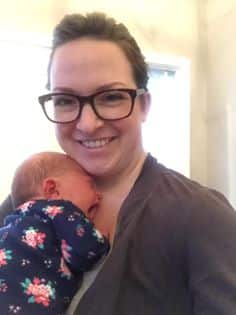 “I was not in my early birthing time. I was at a 6 and I don’t remember how effaced. A lot. Woah! I played Easy First Stage aloud in triage. My midwife and the nurses were awesome.” 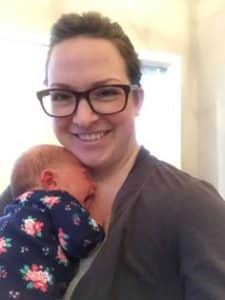 After my attempt to visualize my birthing time happening earlier than I expected didn’t work, my “peace in waiting” grew. At 41 weeks and three days, we decided to have my mother-in-law come to stay with us, as she was on call to take care of our three-year-old when it was time to go to the hospital. She arrived around dinner time on April 17 and we had a quiet and peaceful evening. I made plans for the following morning, “in case I’m not busy,” to go to my mom group meeting.

I had been having warm-up waves (Braxton Hicks) for a week or so, during which I told myself, “Hmm, I’ll check back in an hour from now and see what’s happening.”

At bedtime on the 17th, I began feeling waves (Hypnobabies word for contractions). I told my husband, “I think it’s starting, let’s go to bed.” And we agreed that he would sleep with one eye open and I’d do some tracks while I rested. I listened to Your Birthing Time Begins (Hypnobabies reminders of all the tools to help with birthing) and Birthing Day Affirmations and dozed through each of them. I drifted through stages of hypnosis, sleep, and light switch on rest, all of them feeling good and my waves feeling easy. I did Deepening (Hypnobabies track for deepening the level of hypnosis), Special Safe Place (Hypnobabies track for creating and staying in a special place with baby), and Fear Clearing (Hypnobabies track to release any fear), switching tracks whenever I felt like I needed different cues.

Sometime in the middle of the night, I gave up on sleeping, and I paused my focus on my hypnosis. I wanted to check in to see what my body was doing, and I wanted to do something with my hands. So, I listened to the background music and played a Sudoku game on my phone.

Shortly after, I had a very distinct feeling of, “What am I doing, I need to get deeply into hypnosis NOW.” I planned to do Deepening, Fear Clearing and Easy First Stage (Hypnobabies special track just for birthing day), in that order. After Deepening, I woke my husband up and told him I wanted to do Fear Clearing (it’s so short!), then time my waves and do Easy First Stage. I told him to sleep some more, and I’ll wake him up once my track is over.

By now, my waves were…. still so easy. But I had made the mistake with my first baby’s Hypno-birth of getting lulled into a false sense of security, and I didn’t use my hypnosis cues until I really needed them, at which point I forgot about them.🤦‍♀️ I was determined to *not do that again, so while my waves were incredibly easy, I began practicing my Peace cue (Hypnobabies cue for instant physical comfort) aloud. I was really impressed, they took my waves from pressure to tingly sensations. Awesome! 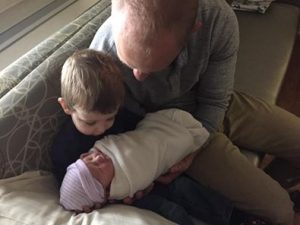 During this time, I heard my husband get up and move around (go pack the car). When I finished my track, I switched to the center to tell him I was going to start my next track. He interrupted me by calmly saying, “I think we should go to the hospital.”

Okay. I had already put my hospital/birthing dress on, so we got up, I walked downstairs and got in the car, stopping to stand still and ride out a really easy wave.

We got in the car and I was reminded of a problem that I forgot to address. My phone wasn’t syncing appropriately with the car, and whatever the malfunction was, I was unable to play audio from my phone. At all. In any way.

The hospital is 10 minutes from my house. I didn’t panic, we just drove in silence, and I continued using my Peace hypnosis cue in my mind. I opened my eyes and watched the drive, even.

When we got to the hospital, my husband asked where to park. We could park right up front, but then he would have to come back to move the car. The parking spaces are a little further away. I told him to park in the lot. I turned Easy First Stage on in my headphones and told my husband how awesome I was doing.😆 “Man, I’m really rocking this! I must still be in my early birthing time.”

I was not in my early birthing time. I was at a 6 and I don’t remember how effaced. A lot. Woah! I played Easy First Stage aloud in triage. My midwife and the nurses were awesome.

My water broke while in triage while I was leaning back in the bed. When I stood up to go to my birthing room, the world shifted on its axis. I felt my baby slide down and there was a lot of pressure. I went from murmuring “peeeeeeeace” to a more audible “AAAAAAAAAAHHHHHHHHHH”, which is a Hypnobabies pushing technique. It became more difficult to pay attention to my track, but I kept calm and could focus on my hypnosis as long as I was standing still.

I took a wheelchair to my birthing room. As we arrived, I considered where I wanted to spend my time. I had visualized spending time in the tub, but it didn’t appeal at the time. I asked for a birth ball. My eyes were closed, and I was standing still and low “ah”ing through my waves. I felt calm and in control. I’m not sure how I appeared to my triage nurse. Apparently, she was the only nurse with me when I asked for a birth ball because she replied that she didn’t feel comfortable leaving me alone to go get one. I smirked. I thought I still had a little way to go before Kate would be born.

So, the birth ball was in a sad state. It had to be nearly halfway deflated, so my belly hung between my knees. I propped my elbows on the bed and put my face in my hands, and the waves were as intense as they would get. I thought (regarding the birth ball), “Man, this sucks.”

But I turned my attention to my Easy First Stage hypnosis track, which I was listening to on my headphones. The track had progressed to an intensity that I didn’t care for, so I asked my husband to restart it from the beginning. It helped. While my waves were very intense, I noticed that they felt very short and I had long periods of rest between them. And I remembered hearing that, when you feel like it’s more than what you can do, that’s when you know your baby will be born soon. It made me smile. I felt Kate kicking and swimming down. She was helping!

Meanwhile, a nurse was trying to get a fetal heart rate, which was challenging, since my legs were essentially encasing my baby. She was going to have to ask me to move in order to get it, and I realized I didn’t feel any better on the ball than I would feel in the bed, so I asked my husband to help me up. He waited. “No, you pick me up.” He did. Lol, I couldn’t communicate it, but my sense of humor hadn’t left me. No way was I going to do a full squat while quite nearly pushing a baby out! “I’m busy!”

I got three quarters on the bed when I realized I didn’t know what position I wanted to be in. I visualized being on all fours, but I birthed our first child on my side. I knew whatever position I landed in would be where I birthed our baby. I felt overwhelmed at the decision, and I let out a hysterical sob. Just one. I chose side-lying. It felt awesome! My midwife supported my upper leg on her shoulder, and she commented on how relaxed I was.

Transformation (transition)happened in one wave. I had a really good pushing experience with my first child, so I looked forward to it this time. Again, I thought pushing felt great. Kate’s head got halfway out during one of my pushes, and there it was. I thought, “Well, Kate, this is not going to work for me.” My midwife suggested giving a little push between waves, for the sake of my perineum. My little push turned into a wave, and I did a second little mid-wave push. Her head was out. One or two pushes later and she was born. It was quiet and relaxed and wonderful.

My total birthing time was 6.5 hours, and two hours of hospital time. I was completely comfortable until the last hour and a half. And no tears.

Thank you, Hypnobabies, for helping me have another great birthing experience!