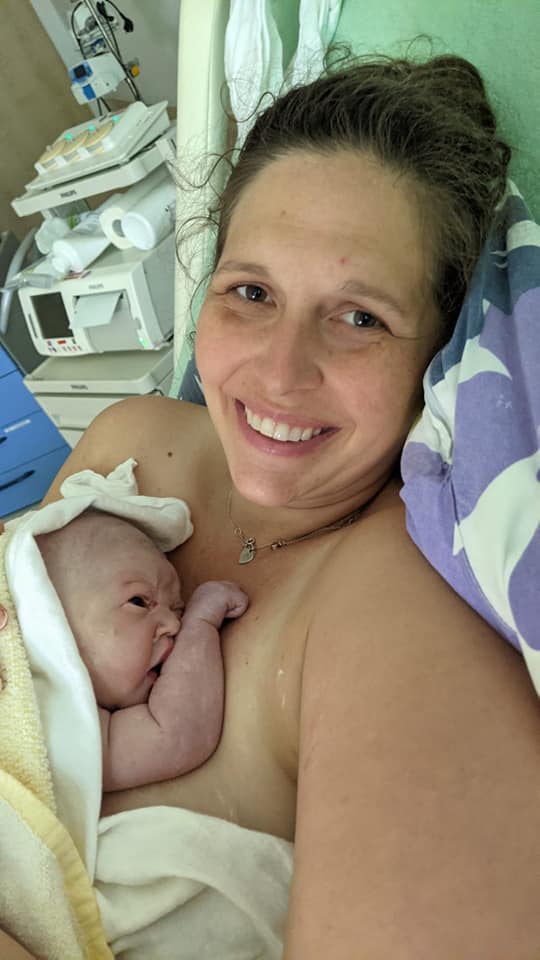 “‘The birthing journey that my baby and I are on is the perfect one for us’ couldn’t get out of my head as well. Again, I took this as my subconscious knowing just what I needed to hear. I began to welcome these affirmations and began using them as a mantra.”

As a (soon to be) third time Hypnobabies mom, I was extremely curious to see just how “Each birth is unique unto itself” would be.

You see, my first baby (born in Germany… More on that in a minute) was breech and after a very long and difficult attempt at a breech vaginal birth, we ended in a C section.

My second was back in the US and was the most amazing, peaceful, calm, and healing VBAC (exactly what “Me and my baby needed”)

So, what was baby girl going to be like!? 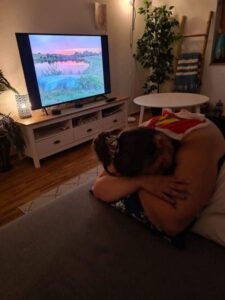 We are back in Germany again and I didn’t realize just how much unresolved anxiety and fears I still had lingering from my first birth were still there. They hung heavy over my head and heart the whole pregnancy despite extra Fear Clearing sessions (Hypnobabies track for letting go of fear) and affirmations knew they were still there.

My birthing time (Hypnobabies term for labor) started 3 weeks earlier than what we were “expecting” (we actually have been saying for months that we thought she’d be early…I just didn’t think THAT early!)

Just like with my second son, I had no idea things had officially started. I’d been having so many Braxton Hicks with this pregnancy for several months now (some too timeable at such early weeks) that that’s all I thought of it Friday afternoon. Besides, there was no pattern at all, so it COULDN’T be time, right!? The waves continued throughout the evening, but the intensity didn’t really increase much before bed.

As the middle of the night crawled on though, I couldn’t sleep (or was awoken) by so many waves (Hypnobabies term for contractions). Not uncomfortable, but there none the less. Again, I think my subconscious knew what was going on because at one point I questioned if I should be starting my birthing day tracks (despite no timeable pattern, and ZERO other birthing day signs)

However, I did not want to start any tracks that could trigger anything if it wasn’t time. So, in the wee morning hours, I just started tracks like “Deepening Your Hypnosis” (Hypnobabies track to deepen the level of hypnosis) “Fear Clearing” and “Special Safe Place”. I figured it was better to get a stream of hypnosis on and even if it wasn’t time there was no harm in those tracks. However, unlike previous times that I had intense practice waves, the Deepening track did not relax me enough to STOP these ones. This was when I started really questioning if it was time since nothing, I was doing was getting the waves to stop. 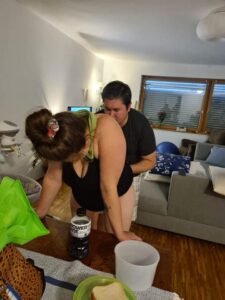 By morning time, I started feeling the waves in my lower back and even a relaxing bath with affirmations playing did nothing to stall them. It was at this time that I hesitantly told my husband that I thought we could be heading into the big day (although I kept telling myself that it just couldn’t be) but still, I began my “Your Birthing Time Begins,” (Hypnobabies reminder of all the tools for birthing) “Birthing Day Affirmations,” and “Deepening” tracks.

As the early morning continued on, I felt more confused than anything else because the intensity of the waves was picking up but there was absolutely no pattern and some weren’t close at all. This was the opposite of my last birth where the intensity didn’t pick up towards the end, but I had very timeable waves for days! (In hindsight I think this time there might have been more waves that I just wasn’t timing that were way more manageable and comfortable that I didn’t consider “a wave”).

Living in Germany again, my mother-in-law was supposed to arrive the next day to take care of the boys during my birthing time, but we were one day early, so again, this can’t be it, right!?

My husband came in to talk to me about how I was feeling (physically, emotionally etc.) and when I burst into tears because this wasn’t “The plan”, THAT’S when I knew it was real…Ah, hello birthing hormones!!! (Quick! Turn on another Fear Clearing!!)

Suddenly, the affirmations about 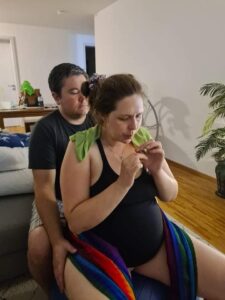 “My birthing journey that I and my baby are on is just what we need!” suddenly seemed to be on the track more and more (it wasn’t, but I heard it very clearly!)

“The birthing journey that my baby and I are on is the perfect one for us” couldn’t get out of my head as well. Again, I took this as my subconscious knowing just what I needed to hear. I began to welcome these affirmations and began using them as a mantra.

By 11 am, my doula arrived. The boys were now with friends and the waves went from “What is going on!?” To very suddenly back-to-back (I think once I let myself accept it was time, my body really kicked in!!)

But these waves were not the Zen, peaceful, sleep through some, type of waves I had with my second son. I felt these and they felt powerful and intense. I could not just sit on my birth ball feeling very inward, as I had with my previous birth and instead needed to be swaying, rocking, moving, and was quite vocal.

I mostly went between “Easy first stage” (Hypnobabies main birthing time track) and “Deepening” at this point. As much as I wanted to keep headphones in, it felt annoying (just as it had my last birth) so I kept them playing out loud. I would notice my subconscious hearing exactly the cues I needed most in the moment.

By about 1 pm, I started feeling slightly “pushy” and since that phase went fast last time, we decided it was time to start heading to the hospital (just around the corner).

Unfortunately, this had been a topic of fear from my first birth and despite me preparing for this phase of transfer in my practice (did a lot of fear clearing, prepped my team on how exactly to help me during this time, had tracks/headphones ready, etc.), being in a foreign country, with a foreign language, during Covid, I still ended up struggling.

I got into my room and my husband immediately got the “Pushing Baby Out” track (Hypnobabies track just for pushing) playing out loud. The (barely English speaking) midwife assigned to my room was very nice but didn’t really understand the importance of giving me space and obviously knew nothing about Hypnobabies. She was a classic German woman; she had a job to do and was going to do it! 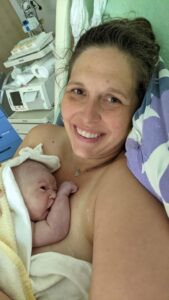 The waves were so strong and without pause that I couldn’t take the time to explain the program. Due to Covid, my German Hypno-Doula was not allowed in the room, and my husband was right in it with me during each powerful, back to back wave that he also couldn’t really explain things to her.

Despite having my “Pushing Baby Out” track on out loud, I couldn’t get back fully into a completely relaxed state but continued to use all my tools and my husband continued to give me cues.

I was EXTREMELY vocal (sorry next-door rooms!) But there was nothing I could do about that. My body needed to be vocal and so I let it.

When I finally verbalized out loud about an hour later that “this was getting so hard” I actually knew to try to welcome that feeling because that meant we were so so close. My husband knew exactly what that meant as well and also reminded me that was a great sign and that we were almost there.

The midwife checked me and said that my waters were so strong and intact. I knew from my last birth that once my waters released everything happened quickly, so I discussed her breaking them, knowing that was really all we were waiting for at this point. She said she could but let’s get through a few more waves. Sure enough, after several more, the waters released. 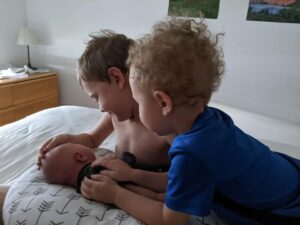 At this point, even though I couldn’t quite hear my track, I would say “Open Open” and “Peace” (Hypnobabies cue for instant physical comfort) with each wave. I’m not sure how many waves came after my waters released but it was less than 10 minutes, and I could feel her head and with several more intense pushes, my daughter joined us Earthside.

We were both doing so well, I was discharged 4 hours later… Just in time to get my other kids and be home for bedtime!

All in all, it was about 24 hours exactly from my first waves to birth (but only about 7 hours of very active and intense birthing. I truly believe that’s because my training and hypnosis helped me stay so comfortable throughout the night). Funny enough, while it wasn’t as peaceful as my second birth, it was EXACTLY the timeline that I had envisioned during my visualizations (just minus our parents being there with us)!

After reflection of the birth, I also realized that this really WAS the birth I needed! I was expecting the calm birth I had previously but just as I needed a healing VBAC with my second, this birth left me feeling so proud that I was able to push past my fears from my first birth that had resurfaced with this one. I’ve now had a wide spectrum of births (breech/ C-Section, calm VBAC, and now somewhere in between!) which is quite an empowering feeling to know I’m capable of it all!