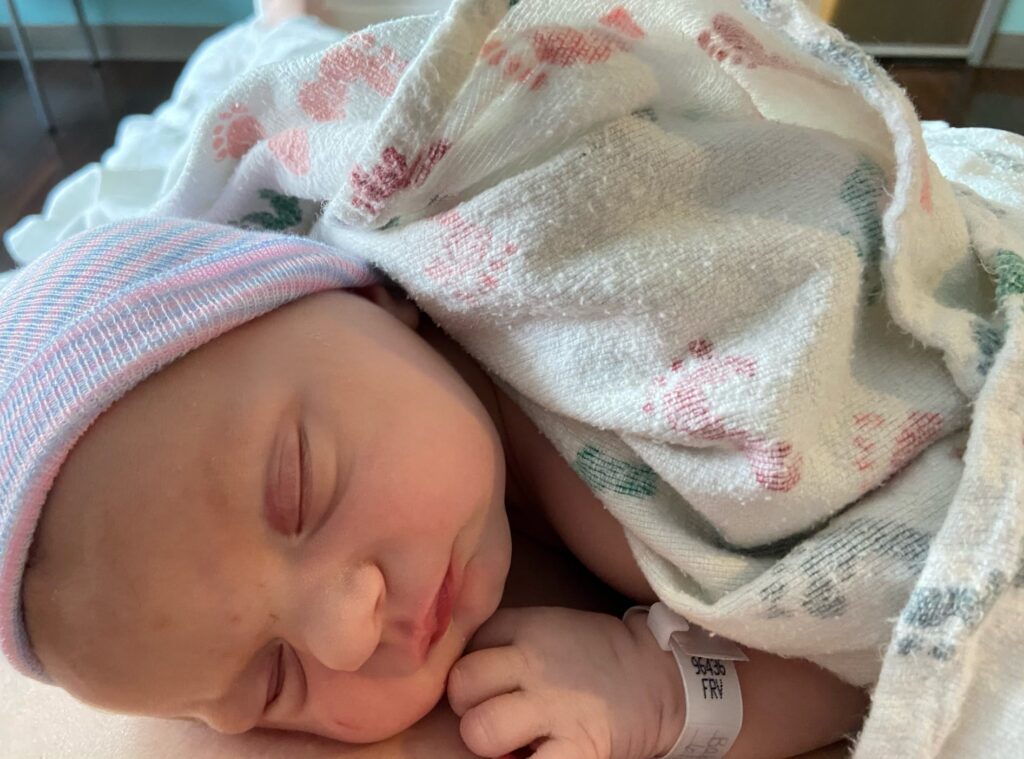 “I found Hypnobabies after an intervention filled first birth where I never felt informed or like I gave real consent to anything that happened. I had an incredible unmedicated second birth using Hypnobabies, and while that wasn’t the outcome here, I felt I made the decisions that were right for me and this baby and that I was informed, considered and in control throughout.” 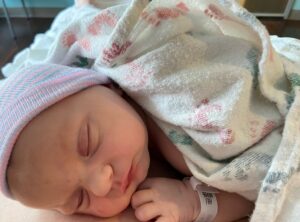 This was my third birth. My first was filled with interventions. I found Hypnobabies for my second and had the birth of my dreams (birth story is posted here if you search my name). This third pregnancy threw me for a loop. I felt entirely different than I did my first two pregnancies. I had pretty bad morning sickness, lack of energy and gained significantly more weight. By the time I reached 39 weeks, I started struggling mentally as well as physically. Once I went past 40 weeks, my mental health issues increased. I was a mess most of the time and I could see it impacting my older children. My 5-year-old was worried about me constantly and that made me feel even worse. (When I had the baby, the first thing she asked was if I was feeling better now – what an angel.)

I declined a check at my 40-week appointment. At 40 weeks I had literally zero signs of birthing time (Hypnobabies term for labor), not even having had any Braxton Hicks. By mid-week, I was concerned enough about my mental health that I decided that at my next appointment, at 41+1, I would request a sweep and schedule an induction instead of waiting until 42 weeks. The night of 40+6, I started having light practice waves (Hypnobabies term for contractions). They never went away, and I was up most of the night trying to rest in between. The evening of 41 weeks, I checked in with my doula. She suspected that baby was in a weird position and recommended I try the abdominal lift and tuck. I did it 3 times and the waves increased significantly in intensity and got to 5 minutes apart, about 50 seconds long. They stayed that way the entire night, so I again tried to rest in between. I must have listened to the Deepening Your Hypnosis (Hypnobabies track to deepen the level of hypnosis) track 10 times through the night. At 6 am my husband got up and came downstairs. He did not like the way I looked and insisted on calling my mom and midwife. My midwife said to go to the hospital because it was my third baby, and they didn’t want him coming faster than I expected. However, I knew that wasn’t happening. The waves were strong, but I just knew they weren’t moving forward at any real pace. I decided to go get checked at the hospital because it was now the same day as my 41+1 appointment, and I was going to ask for the same thing there anyway. Here still I was managing physically, but mentally I was not in a good place.

When I got to the hospital, I was 4 centimeters with bulging waters. My midwife monitored my waves and kept remarking how weird they were; there was no consistency or progression. She did a sweep, and we waited another hour but there was no change. We then did the abdominal lift and tuck some more and she used the rebozo on me in the room and waited again, but no change. At this point I agreed for her to break my water. We hoped this would tip the scales for me to move forward. She was concerned, as was I, that I was so tired already. She broke my water, and it was literally gunk. Just entirely meconium. She assured me this was common with postdates babies and we’d be okay. I listened to my tracks and worked through more intense waves for the next hour, but they still never progressed. My midwife came back in, and we talked through how I still just wasn’t moving forward. We decided to start the lowest level of Pitocin to try again to get over the hump. 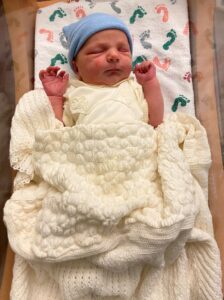 I don’t think the Pitocin had actually even entered my blood stream when I told my husband I wanted to ask for an epidural. At this point I was back to sobbing, feeling not myself mentally, and was so tired. I was no longer able to relax through waves and was feeling horrible in a situation that I wanted to view as beautiful and happy and exciting. He and my midwife were so supportive and understanding and wanted to see me relax. I got the epidural and right after I was 7 cm. I was able to just rest in bed for an hour and felt much calmer. An hour later I was 10 centimeters and ready to push. It was weird going back to pushing with an epidural after having an unmedicated birth last time, but I also knew much better how to push this time. Unfortunately, little mister was still struggling. Somehow, he had his head wedged in a way that was inhibiting his ability to move down. I pushed for about 90 minutes but not pushing the whole time. We would move me to different positions, I’d push, we’d try to reposition him, and then we’d have to let his heart rate rest and recover, and then we’d do it again. Eventually my midwife was able to help his head reposition to come out. Once his head was out, he also had his cord wrapped around his neck in a way that may have been making his descent more difficult for him. We are both recovering wonderfully and while the interventions I used weren’t my original plan, I think they were the right birth for me for this birth. While his positioning may have eventually resolved itself, I don’t know, I did know that my mental health was not in a positive state, and I needed to address that for me and my whole family. I found Hypnobabies after an intervention filled first birth where I never felt informed or like I gave real consent to anything that happened. I had an incredible unmedicated second birth using Hypnobabies, and while that wasn’t the outcome here, I felt I made the decisions that were right for me and this baby and that I was informed, considered and in control throughout.