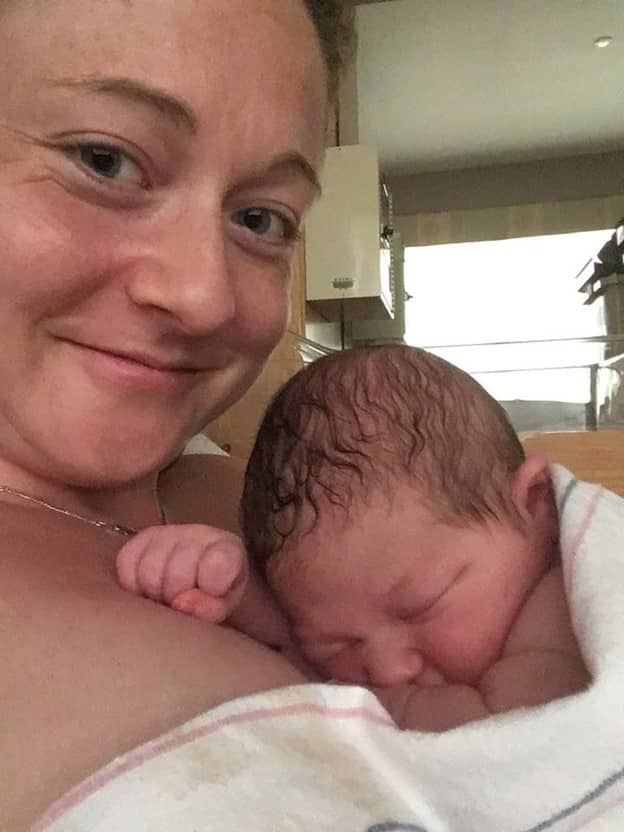 “Throughout the night the waves continued, and I was able to sleep intermittently, the whole time cycling through my Easy First Stage, Special Safe Place and Birthing Day affirmations tracks. Around 6:00 am my waves were 4-6 minutes apart and I woke up my husband, mom and stepdad and told them the good news, “I think we are going to have a baby today.”” 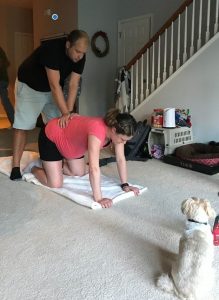 My guess date (Hypnobabies term for due date) was 7/29/2020 and I had intermittent practice waves (Hypnobabies term for contractions) that day. The next day I had my final midwife visit. She checked me and I was 1.5cm and she performed a very vigorous membrane sweep. I already had 3 membrane sweeps but this was by far the most aggressive and I truly think that it helped get things started. Shortly after the appointment and all throughout that evening I noticed a significant amount of mucus plug coming out.

That night (7/30) my husband and I went for a walk around 11:00 pm and I was having inconsistent pressure waves that I started to feel more in my back. Around 12:00 we laid down in bed and I noticed that my waves were becoming stronger and more consistent. At this point I didn’t want to cry wolf, so I snuck out of bed and went downstairs (not wanting to wake my husband if it wasn’t the real deal) and laid on the couch. At this point my waves were consistent and 8 minutes apart and I started listening to my Easy First Stage track (Hypnobabies main birthing time track).

Throughout the night the waves continued, and I was able to sleep intermittently, the whole time cycling through my Easy First Stage, Special Safe Place and Birthing Day affirmations tracks. Around 6:00 am my waves were 4-6 minutes apart and I woke up my husband, mom and stepdad and told them the good news, “I think we are going to have a baby today.” I then went and took a bath to see if that would progress things, unfortunately it slowed my waves down to 8 minutes apart, so I got out and took a quick shower.

My waves picked back up in intensity and frequency and by 1:00 pm I had my friend who is an OB come and check me. She told me I was 4 cm dilated and 20 percent effaced, and I was devastated. I really thought after 13 hours I would be further along. She recommended we stay home and continue doing what we were doing. For the next 6 hours I continued having waves every 2-4 minutes. My husband was a champ at counter pressure, and it helped me feel so much better.

At 7:00 pm my OB friend came back and checked me again and told me I had made great progress, I was 7cm and 80% effaced and -2 station. I was so relieved. She told me that it would be a good idea to get to the hospital in the next few hours as things usually pick up in the active phase of my birthing time (Hypnobabies term for labor). At this point I continued listening to my tracks and had a sandwich as my husband and my mother ran around packing the car. We finally got all our things gathered and headed to the hospital around 8:15 pm. Luckily, I was able to stay relatively focused on my tracks during the drive.

When we arrived at the hospital my husband got me a wheelchair because my waves were only 2 minutes apart at this point and we weren’t moving too quickly. We had called ahead to let them know we were coming but unfortunately when we got to the check in desk, they did not have a room available for us. About 20 minutes later we were in a very small “makeshift” room because all the birthing rooms were occupied, and they said they would get us in there as soon as they could. Given the era of COVID we were both wearing masks during this whole time and it was very uncomfortable. They had me change into a gown and the hooked me up to a monitor and started the IV. 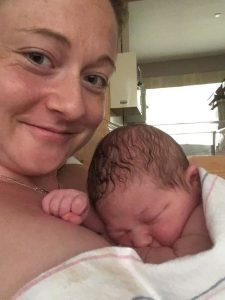 The problem was I felt best during my birthing time on my hands and knees and this was very difficult to do in the small room on the bed. At this point the resident comes in a hurry (before I had even put my mask back on) and says she needs to do a check on me. I was in the middle of a wave and she said she had to check now and that we couldn’t wait. At this point I was no longer in hypnosis given all the commotion in the room. She performed a very hasty exam and exclaimed that I was only 5cm dilated and 60% effaced and -1 station. She said she “wasn’t sure who checked me earlier, but their exam was very wrong.” This was obviously very upsetting but given how hastily she had performed the exam I told myself she was wrong and that my OB friend’s exam was correct, and this kept me positive.

At this point I had never put my mask back on but no one had asked me to put it back on so I kept it off, as this was far more comfortable and everyone else was wearing their masks. After 2 hours around 10:30 pm they transferred us to the much larger birthing room. In this room I was able to be on my hands and knees during my waves next to the bed. I had great difficulty with IVs and ended up getting 4 different IV’s placed in the span of an hour, all whilst my waves were 2-3 minutes apart, again making it very hard to stay in hypnosis. But we were able to dim the lights, have intermittent monitoring, saline lock the IV and minimize interruptions for the next few hours. I must have uttered the words “Peace” (Hypnobabies cue for instant physical comfort) “Relax” (Hypnobabies cue to deepen hypnosis) and “Release” (Hypnobabies cue to instantly turn off) 50,000 times at this point as that was my mantra during waves and it kept me focused.

Around 12:00 the resident came in to check me once again in a hasty manner and she told me I was 7 cm and 80% effaced at this point. After 24 hours of birthing time I was feeling extremely tired and asked her what my options were. She told me they could give me a narcotic Staydol? That might make me very loopy during birth (pass) and epidural (pass) or “although it is not natural, we could break your water” (uh duh yes please). So around 12:30 pm she broke my water and man did that speed things up. The waves became somehow even stronger, especially in my back, and were now 1-2 minutes apart.

I believe I was in hypnosis for the next two hours because they flew by despite being very intense and around 2:45 they came in to check me again and said that I was 10cm, 100% effaced but I had an anterior lip of my cervix. They then recommended that I sit straight up in the bed and ride out a few more waves before I began pushing, which my body was doing on its’ own at this point. This was a very extreme discomfort at this point because I felt I was fighting my body not to push but I didn’t want to damage my cervix. After 3 waves they checked again and said I was good but that I needed to pee to help bring down the baby. 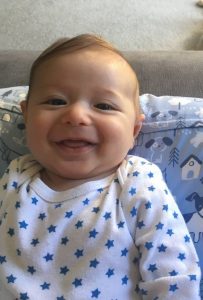 Then came pushing. We turned on Pushing Baby Out (Hypnobabies track just for pushing) for the room to hear and the lights in the room remained dim. Initially I had told them I wanted to do mother directed pushing. We tried two rounds of this and were unsuccessful, so I had them switch to directed pushing and I found this much easier. After about 20 minutes they let me know that the baby’s heart rate was dropping so they had me switch to my side to push, this was not very effective but helped the baby’s heart rate. They then put me back in lithotomy and I continued pushing for the next hour around which time I began crowning. Once the baby’s head was under my pubic bone, they didn’t want it to fall back in, so a nurse and my husband held my legs up the remainder of the time in between pushes. At this point the attending announced that he was too far down to do a C-section so the only way this baby was coming out was vaginally. Although I was still terrified this finally confirmed I was having a vaginal nonmedicated delivery- something I have always wanted and worked so hard to complete with Hypnobabies!!!

I ended up crowning for 45 minutes. They got me a mirror and that really helped, and I was shocked when I saw that the baby had a full head of hair. I remember seeing the head come out and then out plopped the body. They placed the baby on my stomach and that’s when my husband announced it was a boy. Unfortunately, after vigorous stimulation he didn’t cry so they cut the cord quickly and brought him over to the NICU team waiting on standby because there was concern for meconium. The next two minutes felt like a lifetime as we waited and then finally, he let out a weak little cry. After being worked up by the NICU team they suctioned him out and wrapped him up and brought him over to me for skin to skin. Lincoln Tyler was born at 5:05 after 29 hours of natural childbirth!

I don’t think I could’ve done a natural childbirth without the help of Hypnobabies. Was I in hypnosis the whole time probably not? But it did give me a plan on how to remain calm and verbalize relaxation cues during my waves. For me “mother directed pushing” was very difficult because I wasn’t able to push the right muscles in a forceful enough way to push Lincoln out. I was also very tired by that point so having someone tell me exactly what to do was very helpful. Overall, I am very glad I did Hypnobabies because it made my pregnancy journey very relaxing and I felt confident going into my birthing time. Stay strong, stay positive, and I wish you the best in your birthing journey!