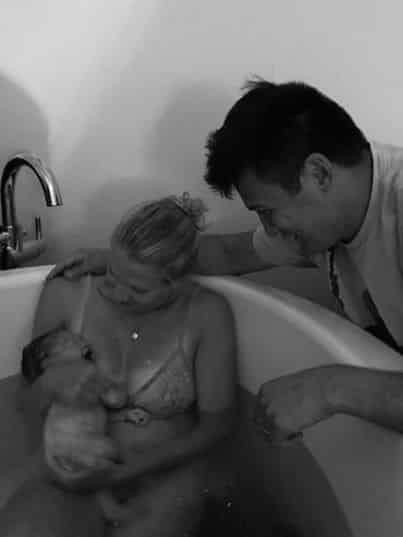 “I asked the midwife if she recommended pushing another way. She simply said to turn around and lean over the edge of the tub. I had just one long pressure wave I believe (or maybe this was over two pressure waves). I felt my membranes rupture because I had my hands on his head. I said the amniotic sac had broken and pushed again with my pressure wave. Then I said, “his head is so big!” I kept pushing, he popped out, and I pulled him up to my chest.” 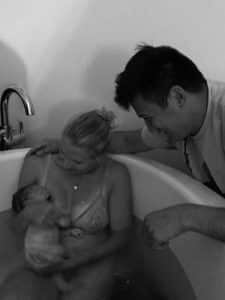 My birthing time began after I put my 22-month-old son down for bed at 7:30 pm. Pressure waves (Hypnobabies term for contractions) just felt different at that point. I had had a membrane sweep around 11:30 am and a castor oil concoction around 3:30 pm (I was nearing 42 weeks again). I was hungry after putting my son down for bed, so I ate some delicious quiche my mom had made and a peach. I listened to Birthing Time Begins (Hypnobabies reminder of all the tools for birthing) and Birthing Day Affirmations. By 8:30 pm I was in the bathroom and I started feeling much more serious about the birth (castor oil is no joke). Around 9:30 pm I went downstairs and said it was time to leave.

My husband had already packed the car, so we took off and arrived at the birth center at 10:00 pm. I had a few pressure waves during the drive but focused on just being present and helping them each be as effective as they could be. I think I listened to Easy First Stage (Hypnobabies main birthing day track) with headphones during the drive. (I had just a fraction of the pressure waves that I had with my first son’s birth. Each one felt intense and productive, as opposed to my first birth, where I just had a trillion tight and frightening pressure waves.) I breathed through everything and eventually wanted to get in the tub at the birth center, probably around 10:30 pm, after laying on my side with my husband in the bed for a little while. I was kind of saving the tub for transformation (Hypnobabies term for transition) or when I needed change. We listened to my Hypnobabies tracks and my husband was perfect.

Hubby knew exactly what to say and do once again. He helped me into the tub and played the track I wanted. Pretty sure I was mostly just listening to Easy First Stage. He said random relaxing things and I got to choose between focusing on him of focusing on the Hypnobabies tracks. (Worth mentioning that my husband did not do the scripts with me at all. He overheard me practicing but that was about it. I just told him what I thought I’d want help with, and it was perfect for us. Also worth mentioning that I listened to every track out loud during pregnancy because I was worried I wouldn’t hear my son wake from his naps, and therefore also listened to everything out loud during my birthing time because it’s what I was used to.) 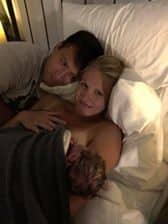 Then I think around 11:00 pm I felt some convulsing with a pressure wave. None of this felt terribly natural or pleasant for me, I should point out. I quietly told my husband in the tub that I wanted to be somewhere else and that I wished this was all easier. And when he got the midwife for pushing, I told her that I felt discouraged and did not enjoy pushing. But that was about the extent of my communicating during my birthing time (Hypnobabies term for labor), and it felt good to just be reassured that I was doing well. I also intuitively knew that when I was alone with my husband and telling him I wished it were easier that this was my transformation, even though things were moving so fast. I was keeping so calm and I at least knew that each pressure wave was really progress.

When I first got in the tub, I could feel my cervix stretchy but still farther back, maybe 6/7cm dilated. By the time I was feeling pushy my cervix was difficult to find. The midwife checked me and gave me a green light to push if I wanted, even though I wasn’t quite “complete.” I pushed for a while sitting up, but only had maybe 5 pushing pressure waves over that half hour. And they brought the baby close, but he did not really crown, and I was hardly what you would call comfortable. 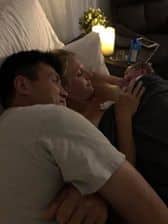 I asked the midwife if she recommended pushing another way. She simply said to turn around and lean over the edge of the tub. I had just one long pressure wave I believe (or maybe this was over two pressure waves). I felt my membranes rupture because I had my hands on his head. I said the amniotic sac had broken and pushed again with my pressure wave. Then I said, “his head is so big!” I kept pushing, he popped out, and I pulled him up to my chest. I was so happy about his membranes staying intact for the duration of the birth because I was GBS positive and this meant we would not need antibiotics.

He had a short cord like my first son but looked nothing like him and was absolutely covered in vernix… at 41 weeks. So strange, because I’m very confident his guess dare was accurate, considering we had so many ultrasounds in the beginning because of my IUD. He cried right away, which was nice. And I was not terribly emotional once again, even though I expected to be more emotional this time. My husband was not crying either this time because he was so surprised the baby was already there (he told me later he expected to be at the birth center for another 12 hours of birthing time, considering my first birthing time was an overnight induction and 14 hours of active birthing time).

Baby and I sat in the tub for a few minutes and we talked about how different he was from our first son before we moved to the bed. I think I bled a little extra this time, but nothing crazy and I was up and showering within an hour or two. I was so happy to hear that I again did not tear, despite him crowning and be born on the same push (I just wanted him out and to be done with birth). Just as much shivering after this birth.

4-hour birthing time, 7lb 1oz, 20in, and the same size 14in head as our first boy. Zero coning this time though, since pushing was fast. My birth went as well as I could have hoped, and I knew I worked really hard for it. I felt good after and it was nice to see my husband so impressed and proud. I would still say it was hard work for me. I kept so calm and my husband says I only made a few noises while pushing. I made my pressure waves very effective and it was night and day difference from my first birth. But I had decided to leave from home for the birth center because I started feeling a bit scared again about how intense birth can be. 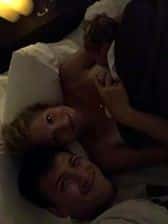 The thought of nitrous oxide never even crossed my mind though because it was not so much the discomfort that was bothering me as the fear of it. A bit difficult to explain. Overall, I am so thankful I had the opportunity to birth this little boy at the birth center, especially considering the Covid craziness. Our midwife and nurse were wonderful, and we had a perfectly healthy birth, complete with homemade bread afterwards while we snuggled for a few hours before heading home at 3:30 am.

2-week update: Reflecting on the birth, it now feels simply like something hard that I did and that I did well and that I could do even better at next time (if we have more children). I wrote down this birth story two hours after giving birth, still in the birth center, so I am thinking it is expected that I would not be eager to give birth again at that point in time haha. But I no longer dread birth like I did after having my first unmedicated non-Hypnobabies birth. I 100% will be using Hypnobabies again with any subsequent births. I adore the memories of my second son’s birth; they are magical and make me so proud. Dream birth.