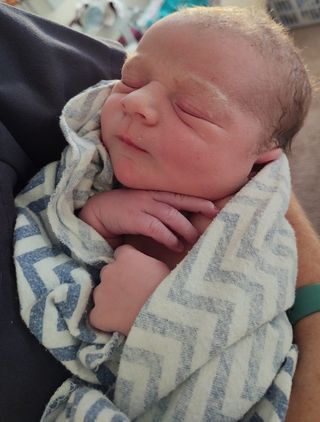 My water broke at about 9pm the day before my guess date (Hypnobabies term for due date). Since I didn’t have any waves (Hypnobabies term for contractions) yet, I listened to the Birthing Day Affirmations and Fear Clearing (Hypnobabies track to release fear) and tried to go to sleep, but I wasn’t able to. I had some anxiety over this birth even though my first birth was an amazing Hypnobabies water birth. I never used the Fear Clearing track with my first birth, but for this one it was excellent at keeping me positive throughout late pregnancy. 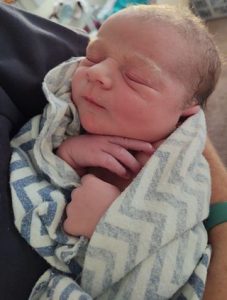 At about 11pm I started having light pressure waves. I listened to Deepening Your Hypnosis (Hypnobabies track to deepen the level of hypnosis) and kept trying to go to sleep. I dozed between some waves. Eventually I switched to Easy First Stage (Hypnobabies main birthing day track) and kept it on repeat. I can’t express how perfect this track is. It gave me exactly what I needed when I needed it. I told my cervix to open, open, open and especially enjoyed repeating, “I deserve an easy, more comfortable birth.” My pressure waves stayed 6-9 minutes apart through the morning, but I could tell they were productive. Each one was a big warm hug and I started to feel the hugs through my back as well.

I began to feel like the birth team wouldn’t make it, so I asked my doula to come over around 7am even though I was still managing the waves just fine. Since the waves stayed 6-9 minutes apart, we didn’t call for the midwife, but I kept feeling like we should, and I think I stalled my own progress some since she wasn’t there. Not a bad thing, as I was comfortable, but the baby might have been born sooner!

Around 9am the midwife called and said she was checking on another client nearby who was in her birthing time (Hypnobabies term for labor) and was going to come check on me as well. She arrived about twenty minutes later and I consented to a pelvic exam. I was in bed at this point trying to sleep once again and listening to Easy First Stage still with comfortable waves still 6-9 minutes apart. I was 7cm dilated and 70% effaced when she checked me. We decided the midwife should stay, and another midwife went to attend to the other birthing mother.

At this point I mentioned that they should fill the birth tub. I think my husband got sidetracked with our toddler and they didn’t realize I could tell I was almost ready, despite my waves still being 6 minutes apart. I had warned the midwife, who was a different one than attended my last birth (where the midwife arrived when I was 9cm and 90% effaced), that since I was using Hypnobabies, it would seem like I was not as far along as I was. That was truer than I even realized this time.

I felt two intense waves and my doula applied counterpressure which felt great. I felt my cervix dilate and efface with those two waves via intense downward pressure on my cervix, and they started filling the pool. I think Easy First Stage had me so in tune with my cervix opening and was so effective that that was the extent of transformation (Hypnobabies term for transition) – two waves about 5 minutes apart with added downward pressure. My next wave was a pushing wave. I tried not to push since everyone was all over the place, but the wave was so powerful and denying that instinct was the most uncomfortable part of my birth.

I turned on Pushing Baby Out (Hypnobabies track for pushing) out loud at full volume on my phone as soon as the wave ended. My doula called for everyone to get in the room and stop filling the pool. The midwife and birth assistant rushed to get chux pads on the bed. My hypnosis broke a bit here as I was telling them where the pads were and had to switch my own track, but I was able to get back into it. I had one more pushing wave lying down on my side and felt the baby crown. I reached down and confirmed the baby was about to make an entrance. I flipped to my hands and knees and with the next powerful pushing wave, birthed her head, and with the next, her body. They barely got the bed covered in time and my husband barely made it into the room to see the birth. She was born an hour after the midwife arrived.

Someone paused my tracks at some point and when I checked later, Pushing Baby Out was 13 minutes and 20 seconds into playing. I think it was actually half of that time that I spent pushing. This was a stark contrast to my first Hypnobabies hypnobirthing home birth, where I pushed for about 3 hours. Most of my anxiety around this birth revolved around pushing because of how long I pushed the first time, and this was completely different. The waves were also so incredibly much more powerful. I felt that I used my hypnosis tools much better this time because I started listening to Easy First Stage so early. With my first birth, I didn’t turn it on until I was in transformation because I didn’t realize how far along I was. I knew to expect to progress easily and comfortably this time, and wow, I really did!