“A minute later, with another wave, I felt an intense urge to push and despite being reprimanded by the physician about pushing, I pushed. My husband called out, “We have feet!” and after another wave, “We have half a baby, just need to clear the head!”

I am an ICU RN who was working 8-hour night shifts from the end of April until 3 days before I gave birth. I was pretty uncomfortable and really quite ready to have my baby, who was 39 weeks + 1-day gestation at that point. I did the “Come Out Baby!” hypnosis track (Hypnobabies track to help encourage baby to be born) before bed that Saturday evening. 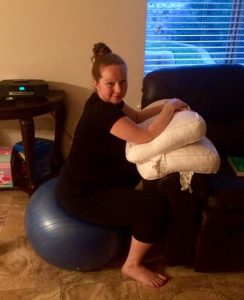 On Sunday morning around 0430, I was awakened by some infrequent but intense pressure waves (Hypnobabies word for contractions). They were short and around 20 minutes apart. I just breathed through them, saying “Peace” (Hypnobabies hypnosis cue for instant physical comfort) to myself. As the morning progressed, the pressure waves stayed around 20 minutes apart, still with high intensity that I felt both in my abdomen and my low back.

I sent my husband and toddler to church without me and relaxed at home, breathing through the waves and I listened to my “Birthing Day Affirmations” track as well as “Easy First Stage,” (Hypnobabies main hypnosis birthing day track) where I went so deeply into hypnosis I felt asleep. My husband and daughter came home and we continued through the afternoon as the waves slowly got closer together. I attempted to take a nap while my daughter napped but in between waves, the baby was quite active—flipping and twisting and poking me to the point I could not actually sleep.

I sat in a recliner rocker for most of my waves because I was most comfortable there. Eventually, I switched to a birthing ball, leaning on a stack of pillows over the end of a couch so that my husband could reach my back when I needed him to. I honestly did not have my hypnosis tracks going for most of this time because I was still coordinating with my husband and making sure the babysitter had what she needed and our doula was in the loop.

My husband informed me that we had accelerated from 5-8 minutes apart to about 3.5 minutes apart. We both agreed quickly that, “We gotta go!” since this was my second baby and last time around we barely got to the hospital in time to push. We hugged and kissed our toddler and headed for the car. I put my Easy First Stage hypnosis track on again on my iPod with headphones and we made the 30-minute drive to the hospital, during which I had probably 5-6 more waves. Our doula called as we were pulling up to the hospital to verify where we were and agreed to meet us inside.

I felt like I needed to use the restroom once inside the hospital but the triage nurse appeared to take us back and said I could use the restroom there. She planned to hook me up to the fetal monitor and check our progress, sending me to the restroom to disrobe. Upon sitting on the toilet, I had a very intense pressure wave and my water broke with an audible pop.

It felt like a cork had been popped off a champagne bottle and some of the pressure in my abdomen released. They planned to put me in my birthing room and monitor the baby intermittently. The nurses went about their admission procedures, asking questions (thankfully my husband answered for me most of the time so I could focus on my hypnosis) and had me sit back in bed to be monitored.

My waves were getting incredibly intense at this point and I felt pushy so I told my husband to get our doula from the waiting room quickly. I wanted to switch my hypnosis tracks from the headphones in my ears to a speaker in the room, which I knew she had. When she arrived, I asked if we should switch to the “Pushing Baby Out” track (Hypnobabies track just for comfortable pushing) because I felt like I needed to push.

The staff asked if I wanted to be checked and I said yes because I really felt the urge to push. The midwife gloved up and examined me stating that I was 100% effaced and dilated. Suddenly, her face changed and she told me not to push, that she thought she felt a foot. The mood in the room instantly shifted as she sent someone to get an ultrasound and someone else to get the ob-gyn doctor who was on for the evening. I remember my husband and doula’s faces looking stricken and concerned. 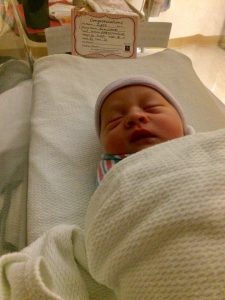 The ob-gyn arrived before the ultrasound machine and he gloved up immediately and laid me flat on my back. He confirmed that he felt a foot and that my baby was breech. She had been “head down” at my last clinic appointment and must have flipped herself around, possible even between waves earlier in the day. At this point, he informed me, “We need to go to C-section, this is not really debatable” and told me not to push, just to breathe. I was devastated that I was being told to have a C-section but at the same time, as a nurse, I know that there are certain steps that have to be put into place even to make a “crash” C-section logistically possible and I could not control my urge to push.

A minute later, with another wave, I felt an intense urge to push and despite being reprimanded by the physician about pushing, I pushed. My husband called out, “We have feet!” and after another wave, “We have half a baby, just need to clear the head!” The Ob-gyn was clearly frustrated and put his hand inside me to attempt to help baby’s head emerge. He was instructing me to “Stop yelling and start pushing” but honestly at that point, in a less than optimal birthing position, I was doing both- vocalizing, breathing and pushing. One good push later and my baby was out and on my stomach. My main concern was that she was ok and my husband and doula reassured me that she was just fine.

I am so very grateful to Hypnobabies for giving me the tools to ride out most of my birthing time (Hypnobabies word for labor) at home, even without having the benefit of my light-switch off (Hypnobabies technique for being deeply in hypnosis) during most of it. My husband was a rock star birth partner this time around, giving me physical and emotional support the entire time and encouragement when I most needed it during that critical moment where I needed to push my daughter out quickly.

My doula was calm and firm, holding her own in a room where we definitely experienced some hostility from the provider. This birthing was radically different from my first Hypno-baby and I know that had I gone to the hospital earlier, they definitely would have insisted on a C-section for safety reasons with a breech baby. I truly believe God had His hands on our family that night and allowed me to give birth the way I wanted while keeping my daughter safe. We now have a crazy and powerful story to tell baby Zurie about the night she was born.