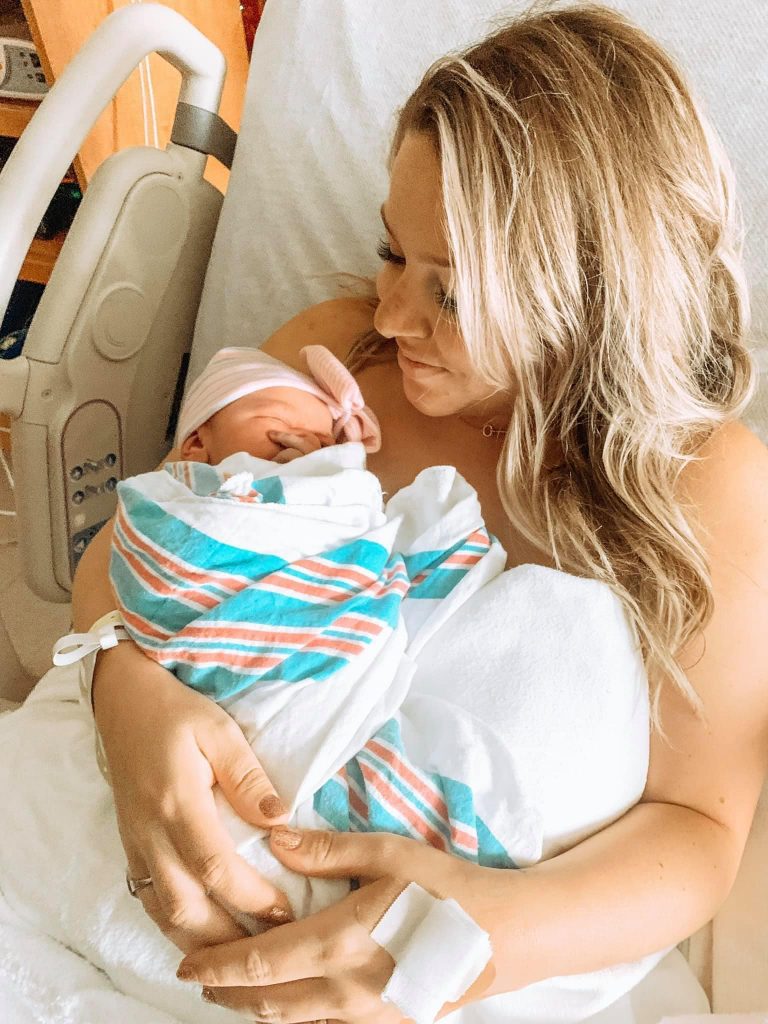 “I fully believe that everything happened the way it was meant to, and if it weren’t for my amazing support team and Hypnobabies, I wouldn’t have made it as long as I did, nor would I have felt as prepared and empowered to make the decisions that I did.”

It’s true that you can plan for something all you want with the guarantee that things will not go as you planned. A lot of times not even close. With that, I will say sometimes it’s not about the plan in place, but the work you put in leading up to it.

I feel compelled to share my story because sometimes, even though things don’t go as planned… they end up more beautiful than we imagined. Hypnobabies prepared me for the birth I was meant to have, even though it was different than the birth I originally wanted. Knowledge is power! 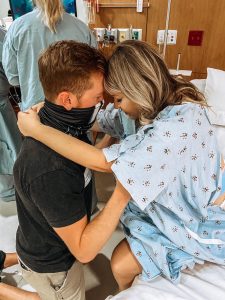 Ella Jo was born after 36 hours of birthing time (Hypnobabies term for labor). 27 hours of my birthing were done completely natural, and in the end, I ended up pushing for almost 3 hours.

I’m not sure why I was progressing so slowly. But I do know, that because of the work put into planning for the “perfect birth”, I was fully prepared for the curveballs thrown at us that day.

I took a bath and tried to rest, but the pressure waves continued to intensify, so I didn’t end up going back to sleep after that. I put on a Easy Comfortable Childbirth (Hypnobabies track for creating a more comfortable birth) and went into deep relaxation. Around 7 am I finally decided to get moving for the day. Things were progressing and I felt like this day could be “it”.

I texted my doula and decided to take another bath. She encouraged me to listen to another track, relax, eat something, and stay hydrated. I went downstairs and my Mom made my husband and I breakfast as I moved around with my birthing ball while listening to the Graves to Gardens album by Elevation Worship. I was pretty sure today was the day.

Around 10 am I updated my doula that my pressure waves were coming on pretty strong and were about 7-10 minutes apart. She encouraged me to go about my day as best as I could with as much rest as I could.

Around 2:15 my doula checked back in with me. My pressure waves had still been coming inconsistently but the intensity had been varying at this point and I was feeling discouraged by that. She encouraged me that this was normal for first time moms, and to again, continue resting while listening to my Hypnobabies tracks and maybe snuggle up with Stephen and watch a movie. It was a rainy day, so movie time sounded perfect.

4:45 pm… my water broke My doula encouraged me to call my provider to see what they recommended I do. I wanted to continue birthing at home because I knew I still had a way to go. My doctor agreed that it would be best to stay home until things intensified and were coming more frequently.

Over the next few hours, I continued at home with my birthing ball and Hypnobabies using my Peace cue (Hypnobabies cue for instant physical comfort_. I was listening to my tracks and trying to stay deeply relaxed while things progressed. My doula continued checking in with me, instructing me on my Hypnobabies, answered my questions, all while encouraging and empowering me every step of the way. She even continued telling me she was proud of me. 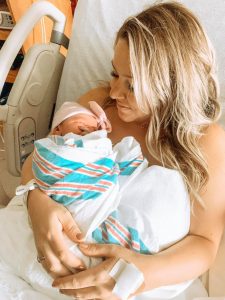 We left for the hospital later that night and arrived around 8 pm. Things were pretty intense for me at this point, but I was powering through it. Things at the hospital kept distracting me from my hypnosis tracks, so I was struggling with staying in hypnosis.

Once we got to a room, I was still struggling with staying in hypnosis. But my husband and my doula were advocating for me and encouraging me every step of the way. My doula set up a diffuser and was diffusing essential oils, rubbing them on my back, and around my head. Lighting was set dim and things were quiet and peaceful. I got in the tub when we arrived and that helped. I had an urge to switch positions and get on the birthing ball, so I got out of the bath and switched things up.

The continued required monitoring from the nurses was very distracting. At one point I changed positions, things grew incredibly intense and I wasn’t sure I could keep going. I felt an intense urge to push, but after a cervical check was only at 5 cm. At this point I had lost hypnosis and felt completely out of control. My doula then took the reins and got me back on the birthing ball and helped me really focus on getting back into my hypnosis tracks. The Peace cue and Deepening Your Hypnosis track (Hypnobabies track to deepen the level of hypnosis) really helped. I shared a video from the incredible next few hours where I was completely relaxed, quiet, and at peace – even while being monitored by the nurses! My doula was amazed and said she had never seen anything like it.

A few hours later, I had been birthing for almost 24 hours at this point and was losing energy and strength. After a cervical check, I had still only dilated to 5cm. We were also keeping in mind that my water had broken earlier that night, I had meconium in utero, and I was continuing to lose a lot of fluid. Time was going by lightning fast while also at a standstill. I was feeling so discouraged. For her safety and my wellbeing, at this time I agreed it was time for an epidural. I was depleted of energy and was beginning to crash. We had hoped with rest, my birthing would progress.

We moved forward with it, and a few hours later my doctor came to check me again. Only dilated to a 6 at this point. I have no idea why my body was moving so slowly. At this point, I had been birthing over 30 hours. They suggested putting me on the lowest dose of Pitocin to see if things would kick into gear, and we could go from there. I had been completely against Pitocin in my birth plan but decided to go ahead because I was still losing energy and hadn’t had much rest or anything to eat. I needed to do this for my baby, and I felt peace about it. 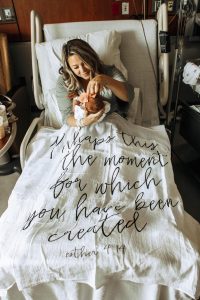 Once they did that, things moved along and by 10 or 10:30 the next morning, my body was ready to push! I ended up pushing for over 3 hours, and after 36 total hours of birthing later, she was finally here!

I fully believe that everything happened the way it was meant to, and if it weren’t for my amazing support team and Hypnobabies, I wouldn’t have made it as long as I did, nor would I have felt as prepared and empowered to make the decisions that I did.

Once she came out, we did immediate skin to skin and she latched my breast beautifully.

I had felt like a failure initially. But I quickly realized that even though it wasn’t the birth I envisioned; it was the birth I was meant to have. And if it weren’t for Hypnobabies I would not have been educated or informed to make the decisions I did regarding my body and my baby, and I certainly wouldn’t have made it 26 hours naturally. At the end of the day, I safely birthed my baby girl, and that’s what was important.

I have zero regrets and would do it all over again for my daughter. Her birth made me feel so strong, and empowered! Women are amazing I tell you.

Thank you Hypnobabies. I couldn’t have done this without you!