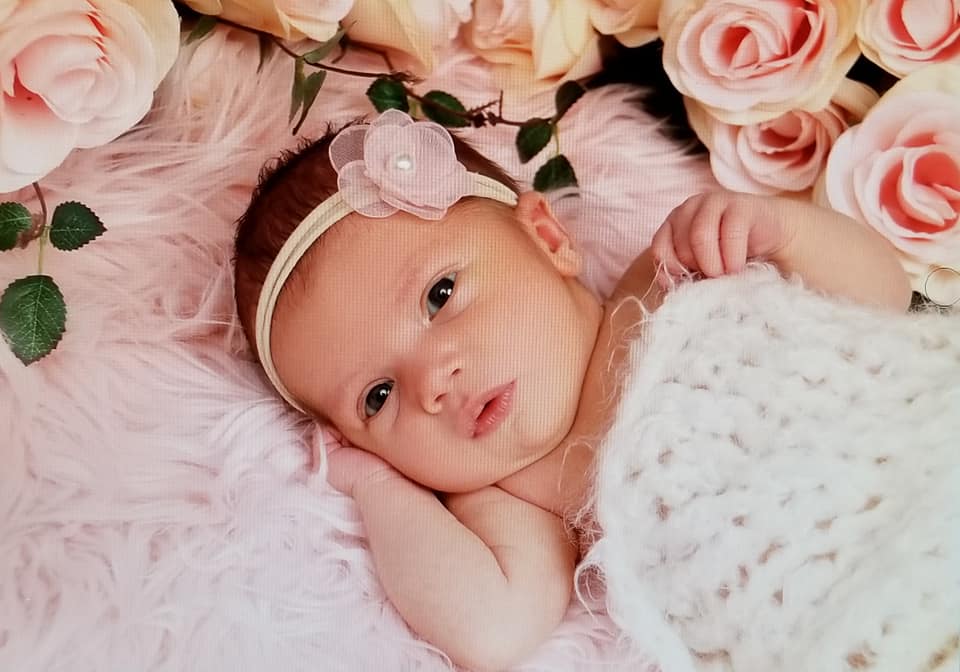 “I am so grateful for the Hypnobabies program. I truly was fully in control and comfortable for the majority of my birthing time. I felt educated and empowered to make the best decisions for myself and my baby.”

Well, as they say, “3rd time’s the charm”. I sought out a doula and got her advice for a vba2c friendly doctor for my 3rd pregnancy. I had always gained the appropriate amount of weight during each of my pregnancies, but this time around I ate healthier, went to more chiropractic adjustments, had my holistic provider clear any bad energy, walked 3 miles a day several times a week, did a ridiculous amount of lunges and squats… I would have stood on my head if it would have resulted in a natural birth!

My doctor was amazing! I finally felt like I had the support I needed. My doula was not a Hypnobabies doula, but after we talked she decided to take the online course! It was awesome!

At 40+3 I dreamed I was having a pressure wave (Hypnobabies word for contraction) only to wake up to an actual pressure wave. It was about 1:30 am. We had been entertaining friends at our house just a few hours before. I decided to ignore it and go back to sleep. About 20 minutes later I woke to another wave. Then 12 minutes. At around 2:30 I got my tracks out, put in my earbuds and was as quiet as I could be in our room. I tried different positions in the dark trying to find someplace I could completely zone out and relax. It just wasn’t comfortable so I got up and took a shower. THAT was amazing! For every wave, I just leaned forward against the shower wall while completely relaxing my lower body. I stayed in there until our hot water ran out. It was now about 4 am.

At that point, my waves were every 2.5 minutes apart lasting a good minute or longer. Now, that wouldn’t be a big deal except we live 130 miles (or 2 hours) away from our hospital and doula. In the middle of a ND winter. My husband called my mom to come over and watch our 2 older kiddos and she arrived around 5 am.

After I was out of the shower, my waves spaced back to about 4 minutes apart. I was happy and totally comfortable. I was hungry and grabbed 2 chocolate chip cookies for the road. I even had enough brainpower to grab a chucks pad and 2 towels just in case!

We got on the road only to encounter a good bit of drifting snow. Yay, I thought. I text my doula to let her know we were coming and I mentioned to her that I should have had a home birth because the car ride sucked. I had a really hard time finding a comfortable position in my seat belt. I had thought I would lean over the back seat in our suburban to relax, but with the road conditions, I felt it was best to stay put. 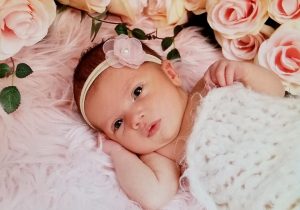 My waves very quickly changed in the car and I found that low toned “ahhhing” made everything better. A few pressure waves later and I felt my body bearing down. I looked at my husband and said “uhhh … honey? These waves feel like I have to push with them.” We weren’t even halfway to the hospital. He then started asking if he should change directions and go to a hospital in a town that was closer. I didn’t know how to answer. So many places “don’t allow” you to have a vba2c. My doula and beloved OB wouldn’t be at this other hospital. We decided to keep driving the original route.

A few minutes later my water broke.. more like exploded! (Thank goodness for those chux pads!) My doula told me that that was great.. hopefully it would lessen the pressure I had been feeling. NOPE! It was full-on pushing with the interstate sign saying 65 miles left. Our suburban was floored– it can only go about 96 mph if anyone is wondering. My hubby called his RN sister for advice and told my mom we may just have a baby in the car.

I was at total peace with that. I was calm cool and collected– thank you Hybnobabies! I had been listening to Easy First Stage (Hypnobabies main birthing time track) for hours now. At about 6:25 am we arrived at our destination in 1 hour and 20 minutes from the time we left our house. My husband joked it was a new record. I was just thankful we made it safely.

My pressure waves had been every 2 minutes in the car and my wonderful doula, Robin, met us at the entrance with a wheelchair. She waited calmly as I moaned through another push leaning backward in my seat (with my seat belt on! They really stretch 😆)

As she was wheeling me up to the L&D floor there was a random check-in table before the elevators. They actually asked what I was there for! Lol! Robin said I was so calm and that the nurses won’t believe I’m as far along as I was. I told her I didn’t feel like I was that peaceful. I made the comment that I better not be only 8 cm or I’ll be mad (my first daughter I had the urge to push at 8 cm and my mom intuition felt like that may be the case again).

Once on the correct floor, we got to go straight to a room. They asked me to put on a gown and pee in a cup– I declined both. I’ve just been pushing every 2 minutes for 45 minutes and you want me to pee in a cup?! Ha! I did try to go to the bathroom but as soon as the nurse heard my pushing she changed gears.

After a cervical check, I was found to be…. 8 cm. I had just known it but it was still super frustrating. I honestly felt completely normal in between waves. However, since I was only 8 cm they told me I had to stop pushing for fear of swelling my cervix. That was super uncomfortable. I can say that was the first point that I had any doubts that I could do this. I couldn’t stop pushing. My body was just doing it on its own. The doctor on call (who just so happened to be the OB I had with my first child- awkward) told me I really had 2 options: either have an epidural in hopes my body will stop pushing OR do nothing, have my cervix swell more and end up with another c section.

Not what I wanted AT ALL. I was so afraid that my baby would not handle the epidural just like her 2 older siblings and I would end up with a c-section anyway. I voiced my concerns and they promised to make sure it would be a better result this time. Epidural it was. Definitely not what I wanted BUT I wanted a vaginal birth moreover a non-medicated birth.

The anesthesiologist came in (while my body is still pushing every 2 minutes) and thought it was a good time to ask why I had 2 prior c-sections. I secretly wanted to turn around and punch him, but considering he was putting a needle in my back, I refrained to just ignoring him entirely instead. About 20 minutes later the pushing urge finally subsided.

Then it was just a waiting game to let my cervix un-swell and dilate the rest of the way. At this point, I told my hubby he could get our bags and one of the chocolate chip cookies I brought. The nurse heard that and told me I wasn’t allowed to eat anything. That was SUPER frustrating because I specifically asked at my prenatal appts about eating. With my first birth, I had eaten lunch on Friday and wasn’t allowed to eat until Sunday when I begged in tears for a sandwich. I told my husband to bring me that dang cookie anyway (and he did). 🤣

I took advantage of this resting time since I only had about 2 or 3 hours of sleep in the last 24 hours. I put on the Come Out Baby track (Hypnobabies track to encourage birthing time (labor) to begin) and applied an essential oil blend. I was so so happy and peaceful. Just so ready to meet this little one.

A short 2 hours later and I was 10 cm dilated. My actual doctor had arrived and he told me I was ready to push. I was informed that after I received my epidural, my waves spaced out to 5 minutes and that wasn’t an ideal timeframe for pushing. They asked to administer a slow dose of Pitocin and I agreed. I couldn’t feel anything with my epidural. After a few pushes, I requested we wait while they turn the epidural off so I could push more effectively.

About 30 minutes later I still couldn’t feel my rear. I had great movement, but it felt like a bunch of bricks weighing my butt down. I tried pushing in every position for 2 hours. My doctor told me that I was doing well and my baby was doing well so if I wanted to continue he would fully support that- but if I wanted to throw in the towel and go for a c-section he wouldn’t blame me. I wasn’t ready to give up. My baby was stuck in the sunny side up position– apparently, that’s just how my babies like to be.

My doula then suggested we try the side-lying release on each side during waves. That was super uncomfortable, but again, I would have stood on my head to avoid another surgery! Baby FINALLY started moving after that, but I didn’t believe them. At 2.5 hours of pushing at the hospital (not including the vehicle) with 2 hours of sleep, I was just plain exhausted. I almost waved the white flag. My awesome nurse and doula kept me going though and 30 more minutes later my sweet baby girl was born. 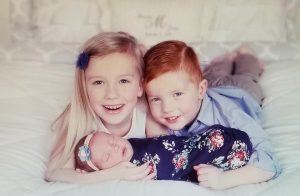 She was my smallest baby at 7lbs 3 oz 21 inches. She was SO calm one of the nurses kept trying to make her cry by rubbing her back vigorously and my doctor reassured her that our baby was doing just fine.

I couldn’t believe I had done it! I had actually given birth to a baby out of the correct exit! It felt amazing! I did end up needing one or two shots of Pitocin to stop my bleeding and many stitches with a 2nd-degree tear, but I was too focused on my baby girl to care. This was the first baby I actually got to hold right after birth ❤

I’ll be honest– the recovery time of a vaginal birth was much harder than I expected, but it was still light years better than my c-sections. I’d do it again in a heartbeat. I am so grateful for the Hypnobabies program. I truly was fully in control and comfortable for the majority of my birthing time. I felt educated and empowered to make the best decisions for myself and my baby.