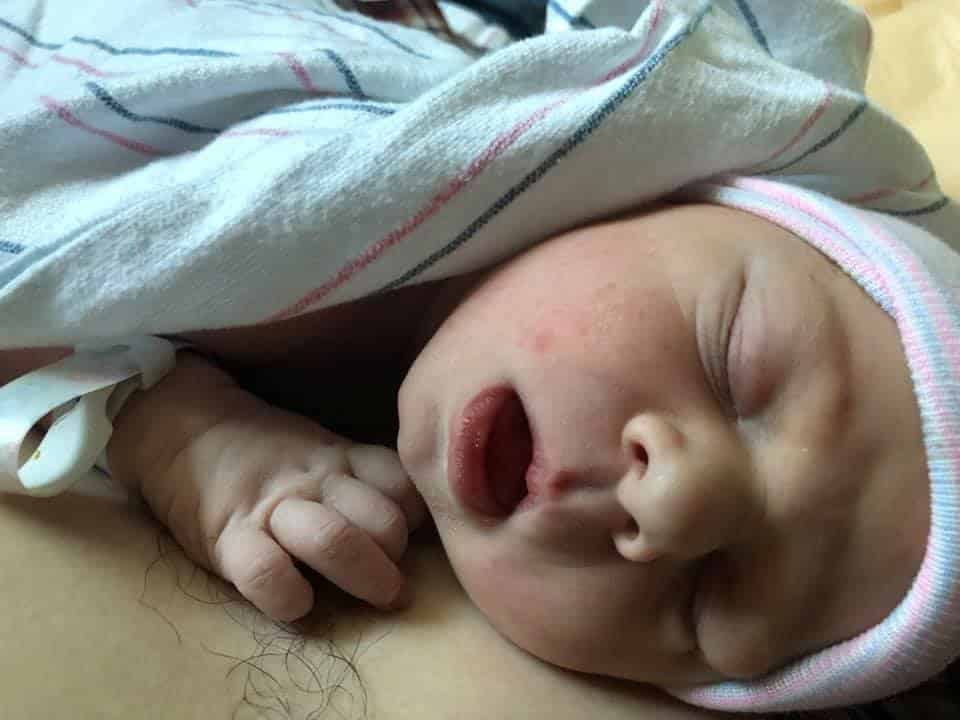 “From waking to birth was 5.5 hours and at the hospital less than 30 mins. it was the most incredible experience and far more comfortable than my last birth. I don’t think I honestly believed I could do it Unmedicated but I did! Using Hypnobabies totally gave me the birth experience I only dreamed was possible.”

I’ve been ready to not be pregnant for a while. Hip/back pain requiring an arm crutch and regular visits to chiropractor, Acupuncture, and massage just to keep me walking. Anyway, I had a hard time the whole program visualizing the orange hypno-anesthesia and finding comfort so I was a bit concerned as my birthing time rolled around that it wouldn’t work for me …. but it was AMAZING. 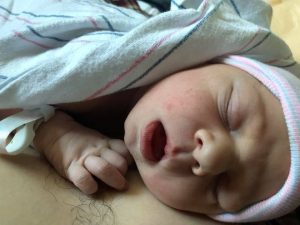 I woke up a little after 1 am needing to poop in a very uncomfortable way. Succeeded there but found my waves (Hypnobabies word for contractions) were coming often enough I could not get comfortable in bed and go back to sleep. I was not timing anything. So, I gave up on reclining the way I practiced and got on the ball with my switch in the center (Hypnobabies technique to be in hypnosis with eyes open) so I could sway as needed. After the Special Safe Place track, I felt like things were getting faster but had no idea what that meant. It has barely been an hour so I thought this was probably just warm-up that would stall.

The waves were all in my low back and pelvic floor. I felt no pressure in my upper abdomen at all. So, I tried to focus on relaxing my pelvic floor and breathing through the waves. It was as comfortable as I could get. I listened to Birthing Time Begins (Hypnobabies reminder of all the tools and techniques for birthing) and birthing day affirmations. Our doula had given us a tens unit so after an hour or so of increasing frequency, I put it on and It made a huge difference. Between being able to boost that to confuse the muscles during a wave and having her do pressure (like leaning her full weight on me) on my sacrum, I was able to ride the waves by just moving slowly, swaying, and trying to breathe and relax my pelvic floor when it got intense. The practice in maintenance practices for loosening the pelvic floor was my go-to.

By 4 am the waves were 3-4mins apart and I was feeling like I wanted to be in my final location so I could get my groove. Also, so the responsibility of the sleeping toddler was out of the equation. But mostly I wanted checked to know how far I was. Last time (non-hypno) I went 8 hours on Pitocin and felt like I was in transformation (Hypnobabies word for transition) but was only 3cm so I got an epidural because I was exhausted. This time I knew the waves were close together but they didn’t feel as intense since I was using my Relax (Hypnobabies cue to deepen hypnosis) and Peeeace cues (Hypnobabies cue for instant physical comfort) … but I could feel the exhaustion wall coming. So, we called Grammy to be in the house as my son slept and by 5:45 am we were loading into the car.

On the way, I was saying “if I’m not at least 7-8cm I’m going to need something to take the edge off”. I did the ride with my eyes closed listening to Easy First Stage (Hypnobabies main birthing time track). I felt pushy as we walked in the emergency room door at 6 am but didn’t follow the urge because I thought it was too early. Last time that pushy feeling put me at 7cm (not ready to actually push that time) but it did give me confidence this time that I was really in transformation.

We got into the room quickly and I had one wave standing there as the nurse said we need to get you admitted. I clung to my husband and this was the first one that felt genuinely on a new level physically. I cried out as it went through my entire abdomen instead of being able to “aaahhh” or softly moan like before. I felt another huge urge to poop that quickly turned into the need to push. I took my pants off to kneel in the bed. Felt the urge again and thought “why not”. If I poop the bed, they’ll change it🤣🤣🤣 so I went with it. It was the first push sensation I just relaxed and let it happen. I could feel my cervix opening (no discomfort beyond the pelvic floor pressure I was used to).

Next thing I know the midwife (first I knew she was even in the room) has her hand on my vulva saying that’s a head and then it was all elbows and knees. I flipped over, took my shirt off and couldn’t believe it was over! The midwife didn’t even have gloves on it happened so fast!!!

From waking to birth was 5.5 hours and at the hospital less than 30 mins. it was the most incredible experience and far more comfortable than my last birth. I don’t think I honestly believed I could do it Unmedicated but I did! Using Hypnobabies totally gave me the birth experience I only dreamed was possible.