“The Hypnobabies information I found the most useful was the knowledge that my body knows just what to do, and to have confidence in this.  And it did; I just naturally went into positions that worked well.  Also visualizing my Special Safe Place during waves worked well.”

We had our baby on Monday night (6 pounds 9 ounces). It was a really good birthing experience, which I attribute to Hypnobabies.

My obstetrician advised induction at 39 weeks due to being 40 years old (which he said put me at an increased risk of placental insufficiency/still birth). I didn’t feel it was necessary at 39 weeks, but decided to do induction if I went beyond 40 weeks.  I thought it would take several days to be called in once I was on the list for induction, but was called at 40 weeks and 1 day. 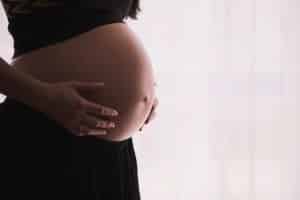 First I was on Pitocin for 3 hours.  I wasn’t expecting it to do much, as it hadn’t when I was induced with my son.  And this was the case this time as well.  I was getting regular pressure waves but very mild and no change to my cervix.  Though ultimately the 3 hours was very beneficial as it gave me the chance to get into the mindset of Hypnobabies.  I listened to the early and active birthing tracks on my headphones and was sitting on my exercise ball or walking around the unit.

Then we broke my waters and this really got things going.  I was expecting this also, based on my experience with my son.  The first hour I went from 3 to 5 cm dilated, but still posterior and thick cervix.  Then over the next 1.5 hours I fully dilated and had my baby.  As the pressure waves kept getting longer and stronger I switched from listening to tracks to my husband reading Hypnobabies Birth Prompts to me.  With the last pressure wave I felt the need to push , and when the nurse checked, C’s head was ready to crown.  I pushed at my own pace, as I wanted, and it was really fast (5 – 10 min

The Hypnobabies information I found the most useful was the knowledge that my body knows just what to do, and to have confidence in this.  And it did; I just naturally went into positions that worked well.  Also visualizing my Special Safe Place during waves worked well.  I was visualizing my 8 year old son trying to see if he could still hug me, laughing with his missing front teeth.  And this made me smile through most of them.  The Hypnobabies Birth Prompts that I found most effective was the ‘Verbal Prompts for Between Waves.’ that my husband read to me in between the last few waves.

The nurse was very impressed with how well it went, and said this many times.  I could have easily gone home right afterwards and this had been my original intention.  But it was later in the evening and there wasn’t a pediatrician until the morning, so stayed the night.  C is doing great – he loves nursing and it looks like he has gained weight already.  His sister and brother are also so excited with him.