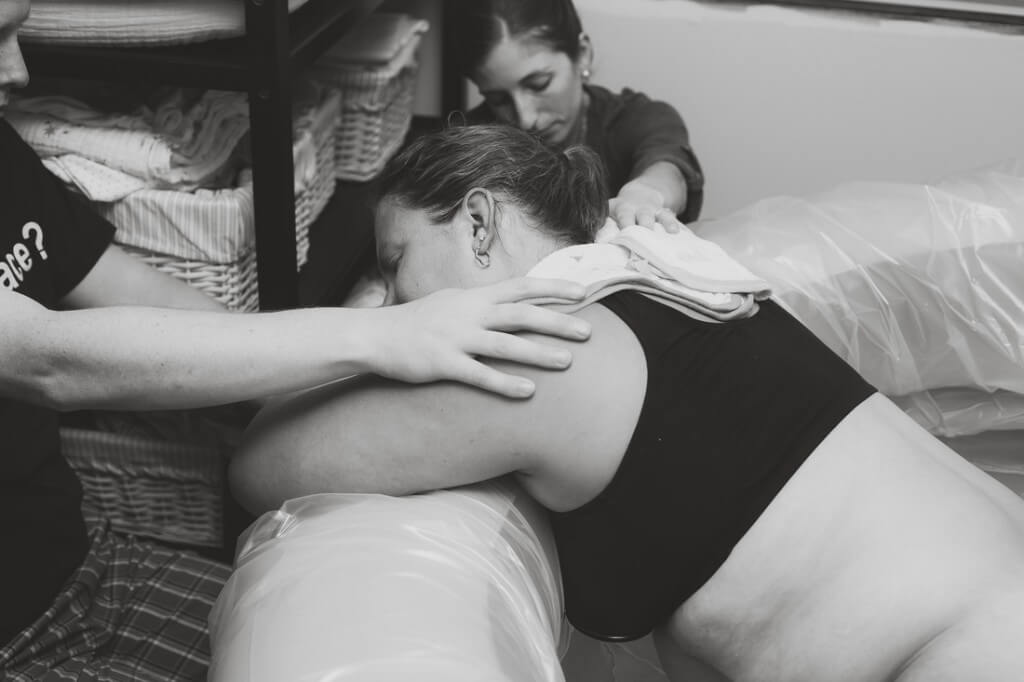 Thank you to Hypnobabies Twin Cities in Minneapolis/St. Paul, MN for Sharing this wonderful HBAC waterbirth story with us. 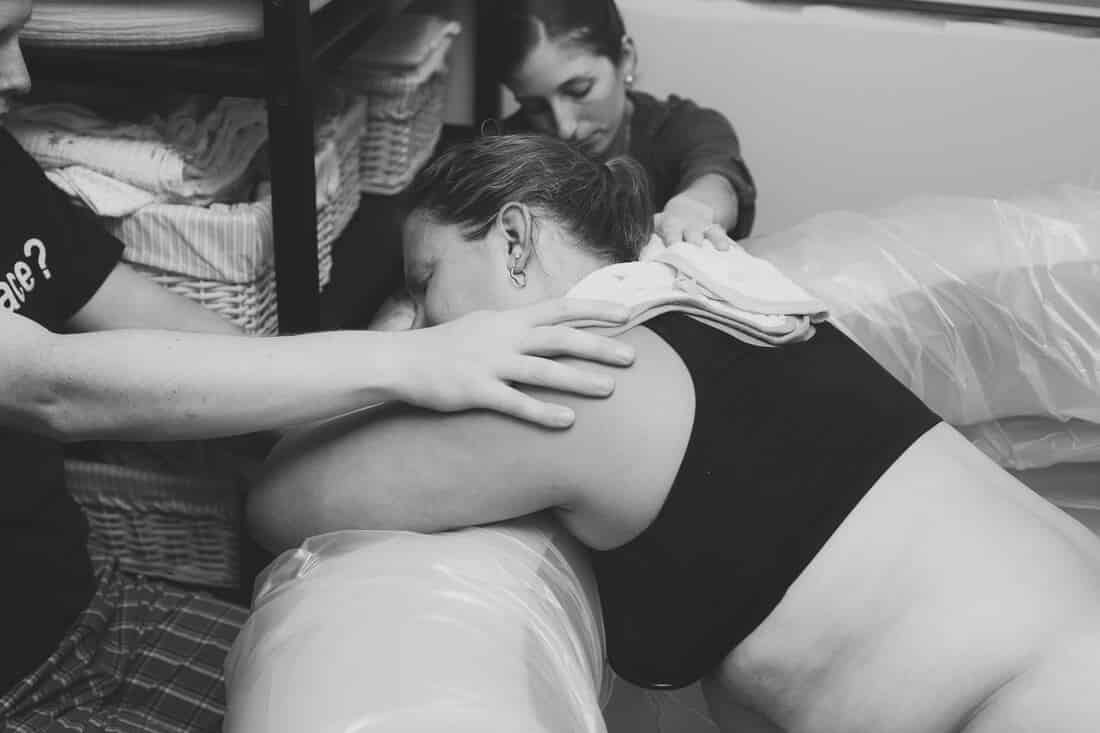 My journey to Carter’s homebirth after cesarean (HBAC) began when my daughter Kaylee was born on September 1, 2011. I was induced at 38 weeks for pre-eclampsia with cytotec, pitocin, and an epidural which led to a cesarean section under general anesthesia. After her birth, I was determined to do things different the next time. I was needed to be the first person to see and hold my baby. I joined the Twin Cities chapter of ICAN (International Cesarean Awareness Network) and learned that I was not alone. That other women had traumatic births as well, but they went on to have beautiful vaginal births after their cesarean. This is when we decided that when we had another child, they would be born at home.

We spent a lot of time doing our research on natural birth, homebirth, birthing classes, midwives, and more! On October 31st, 2012, we found out we were expecting our second child. We went on the hunt for the perfect homebirth midwife, doula, and childbirth class. We quickly found our midwives and decided to use Hypnobabies for this birth. We couldn’t attend in person classes due to scheduling conflicts, but we were able to do the home study course. We went back and forth on hiring a doula. One thing I really regretted in my daughter’s birth was not hiring a doula. Even though I had 2 wonderful midwives attending my birth, I didn’t want to have any regrets this time, so we went ahead with finding a doula (we hired Lindsay McCoy) and are beyond thankful we did.

I spent my pregnancy preparing myself for this birth. I needed to make sure I did not get pre-eclampsia and I needed to stay healthy. I completely changed my outlook on pregnancy and birth. I ate healthy, stayed active, went to prenatal yoga, received chiropractic care, bodywork, and massage, did my daily spinning babies, listened to my Hypnobabies tracks and practiced my Hypnobabies techniques, read more birth books, attended ICAN meetings (and joined the board), met more homebirth families, and really took an active roll in preparing for this birth. I wasn’t going to let anything get in my way of having a successful HBAC!

Fast forward to July 2013. My guess date was July 13th, 2013. This day came and went with no baby. So did 41 weeks and 42 weeks! I was growing impatient, but my husband kept reassuring me that I would not be pregnant forever and that babies come when they are ready. Thankfully, my doula had gone to 43 weeks herself and assured me that I would go into my birthing time. At 42 weeks we started trying all the old wives tales to get birthing started. This little guy must not have been ready, because none of them worked! At 42 weeks 4 days, we went in for a biophysical profile (BPP). This showed low fluid, but nothing my back up OB said was urgent. He encouraged us to keep trying to get birthing started and come back in 2 days for a follow up BPP and we would go from there. He was pretty confident that it would happen soon and was not concerned that I was nearing 43 weeks. We were very lucky to have fabulous, supportive midwives, and a wonderful back up OB!

I cried lots of tears that day wondering when my baby was going to decide to make his appearance, but also accepted that he would come when he was truly ready. Earlier in the week, we tried some herbs with our midwives, but that did not encourage birthing to begin. We decided to try them again that night to see what would happen. That night, we had a wonderful dinner and put our daughter to bed before the midwives arrived. I must have had a gut feeling something was going to happen. We read extra books and had lots of extra snuggles, hugs, and kisses before bed that night. I think deep down, I knew this would be our last bedtime as a family of three.

The midwives arrived around 8:00 pm. I spent the next hour bouncing on my yoga ball, hanging out with our midwives, and trying the herbs. Around 9:00, I started getting a little crampy and a few waves here and there. By 10:00, waves had begun to get regular. I started listening to my Hypnobabies Birthing Day Affirmations while bouncing on my yoga ball. I texted my doula to let her know that labor had possibly begun. I told her that we may have a baby the next day and that the midwives were still at our house. I honestly thought I wasn’t really in my birthing time. I thought the midwives would go home to rest and come back in the morning. Being almost 43 weeks, I was in complete denial that birthing was actually going to happen! Shortly after texting my doula, our midwives decided to time the waves. They were already 2 minutes apart. I kept moving on my yoga ball for awhile, then went to take a shower. I went upstairs and by the time I got up there, I could barely move through a wave. I asked my husband, Jon, to come help me. I leaned on him during the waves while I was trying to move into the shower. I listened to my Hypnobabies Deepening track and kept going between waves on the toilet and waves leaning on Jon. I finally got in the shower. The water felt great but standing was a challenge. I got out and got on the toilet again. I started getting vocal through the waves. Deep moaning helped me make it through them. I have no idea how far apart they were, but they felt very close. I told Jon that I needed them to set the pool up because I needed to get in it now. By this time, my midwives were setting everything up for the birth. I texted my doula a little before 11:00 to come now. She asked if the midwives were there and all I said was yes. She asked if she should let the birth photographer know to come, and I said yes. That was the last I looked at my phone.

My doula got to our house at about 11:45 and my photographer got there at about 12:00. I was sitting on my yoga ball in our bedroom while everyone scrambled to get the birth pool set up. My doula used the relax cue with her hand on my shoulder and said lots of wonderful, positive Hypnobabies birthing affirmations which kept me calm and relaxed. The midwives and Jon were trying to get the pool filled fast. The hose was not quick enough! They brought up pots and pitchers of water from the kitchen to the nursery upstairs where we had the pool set up. Shortly after, the pool was full and ready for me to get in. I climbed in the pool before another wave hit me. The water felt amazing!
The only position I was comfortable in was kneeling and leaning over the edge of the pool. Jon held my hand pretty much the entire time. He was truly my rock through all of this. My doula helped me with Hypnobabies affirmations, staying relaxed, and breathing my baby out. My moaning got louder and deeper and the pressure waves more intense. I can’t say it wasn’t painful, but I was able to keep my body relaxed and not tense up. I thank Hypnobabies for being able to keep me calm and my body relaxed through this stage. I spent awhile on my knees hanging over the edge letting my body push. I never believed people when they said your body will start pushing when you are ready, but it is absolutely true! As baby moved down, I needed to move to open my pelvis. I alternated between one knee down and the other knee up in a lunge and then the same thing on the other side. It was uncomfortable but its what baby and my body needed. My midwives also wanted me to sit up so gravity would help bring baby down. This was incredibly hard to do. I certainly tried my best to stay upright, but I couldn’t do it every wave. I said many times “this baby needs to come out!” I was getting close to crowning when they brought my husband an elastic band with handles on it that he wrapped around his body and I held onto the handles to keep myself upright. This is when the intense pushing began where I really gave it my all. Shortly after, I remember saying it burned and they said that was good and to take it easy and his head was almost out. A couple pushes later and his head was out. His shoulder was a little sticky so my midwife helped loosen his shoulder and shortly after, the rest of his body slid out. I remember hearing everyone tell me to reach down and pick up my baby. I reached down and grabbed him into my arms and said “I did it!”. I think a repeated “I did it” over and over again! I was the first person to see and hold my baby!
Carter was born at 2:14 am. He certainly waited until the last minute to be born, but once birthing started, he was in a hurry! His whole birth was about 4 hours long! He was 9 pounds, 9 ounces and 22.5 inches long.

Carter’s birth was absolutely perfect and everything I dreamed of. It was the healing birth I needed and it brought our beautiful baby boy into this world!