“After about 39 hours since water breaking and 25 minutes of pushing, after a night of tornados 🌪—- my midwife flipped out — our son!!! He immediately proceeded to pee on my husband and cry haha. We called out his name and we cried. When they closed the shades / dimmed the lights he opened his eyes and looked at us. Oh, the joy!”

We loved our Hypnobabies class and kept up the practice as best we could through a last-minute move into our new home. Hypnobabies helped me, my husband and our baby in unexpected ways.

mmanuel had a guess date of Feb. 17. By the time he was a week late, our backup/on call midwife was bringing up scheduling the birthing time (Hypnobabies term for labor) with an induction. I refused to schedule it and insisted on waiting until the two weeks “late” mark since babies are born on their birthdays and know the right time to be born.

Still, I wanted to avoid having a medicated birth, and our plan was to use the birthing center. I walked and walked, curb walked, took baths of clary sage, did prenatal yoga, and did so much research along with listening to “Come Out Baby” (Hypnobabies track to encourage baby to be born) and the other appropriate tracks. Practice waves (Hypnobabies term for contractions) would come and go.

My favorite midwife did not recommend it herself I do this but said I could try if I wanted – so after research from other moms, I walked, had a healthy dinner, packed, prepared for bed, took a specific dose of (food grade) castor oil in Talenti Sicilian pistachio gelato and started listening to “Come Out Baby.” Several minutes in, as I started talking to our baby (we did not know the gender:), I heard a pop. I didn’t think anything of it, at first.

But a few minutes later when I turned over on my side, so much water began to gush and leak! My husband and I were so excited! Baby was on the way. This was around 10:30/10:45 p.m. After a bit we called our hypno-doula, got advice, and the midwife. We tried to rest but it was difficult. I listened to Birthing Day Affirmations and felt so happy and peaceful because I would not have to “schedule” a time or take any pill.

However, I was advised by the nurse to go on to the birthing center / hospital (there is a specific birthing center in our hospital) since they wanted to give me antibiotics for possible GBS positive. We knew about this and considered the benefits and risks and so within an hour we were on our way.

Someone had apparently tried to break into our car’s trunk which delayed us a few extra minutes as my husband struggled to get it to close. (Later my father-in-law was able to fix it in the hospital parking lot lol) it was raining, I had towels wrapped under me and a nest in the seat. We were well prepared thanks to the great Hypnobabies list and advice from our instructor and hypno-doula.

It was a bit challenging to switch on and off, I was shivering, and so my husband James took over 🙂
The triage/admitting nurse seemed to misunderstand my husband’s caring – he was my Hypno-guardian and spoke for me. But she asked me (when he went out briefly) if I were safe with him!! I guess because I was so quiet and letting him do the talking. I had to tell her I was quite safe! I let her examine me, the second exam I had ever had. I found it uncomfortable, and she told me I was not dilated enough to go into the Birthing Center yet. However, she got us a room in the main maternity ward which is very similar but not as homelike. This was the first change of plans as it was past 1 a.m. and I was just listening to my Hypnobabies playlist and occasionally murmuring “Peace.” (Hypnobabies cue word for instant physical comfort)

The hospital room was huge, comfortable and we were blessed as our doula came to give us support – I used my orange hypno-anesthesia as they gave me an IV that would give me antibiotics every three hours. It was hard to sleep, but we stayed in a relaxed state, and the nurses commented on how relaxing our room was and didn’t want to leave it, haha.

I had a wireless heart monitor for baby for a while but eventually it lost its signal. As shifts changed, each nurse seemed to have a different preference on what to do/how to monitor. My backup midwife was on call, and she came to check on me. I know she means well but sometimes she rubs me the wrong way; additionally, her checks are not the most pleasant. I was dilating very slowly and nearing the 24-hour mark. My husband and I tried just about everything possible, but without much immediate success.

As I knew then, dilation can happen very quickly and out of the blue, but there seemed to be more pressure on us since our baby was now 2 weeks past the guess date (Hypnobabies term for due date)…we walked and moved and exercised, hubby, doula and my mom supported me physically and mentally.

I’m thankful that my doula advised me to eat or idk if I could have had the strength, I needed for a long Birthing time. My husband snuck me snacks and even a subway sandwich, which baby also enjoyed as we heard the heartbeat grow stronger after I ate 🙂 my husband was a great hypno-guardian and birthing partner.

Family was in the waiting room for sooooo long. We chose to take advice and I accepted Pitocin, which I had never wanted. And in fact, it made me upset that I had it. But it seemed like it was what needed to be done to help me to progress in my birthing time.

As the waves 🌊 grew oh so intense and strong, I leaned into my birthing ball, and later pretty much collapsed onto it. We had been instructed not to use the hydrotherapy tub after all. My doula and hubby helped my pressure points through the night as we passed the 24 hour mark…and that’s about when, over the Hypnobabies recording, we heard the storm outside, saw the electricity flicker, and suddenly all phones in the birthing room went off, whether or not they were on do not disturb.

Nashville was under a tornado 🌪 warning! I felt a bit of concern but physically and mentally I had such a positive mindset I didn’t think much about it, except when I went to the restroom and due to the power outage / someone unplugging the battery, the Pitocin machine had to start all over again which basically took an extra two hours. But still I said “Peeeeaaaaacccceeee!” The hospital is a fortress anyway. So my birthing time continued…I knew that I must be so close, and hearing my little one’s heartbeat kept me motivated (although I think now that it was over monitored) … 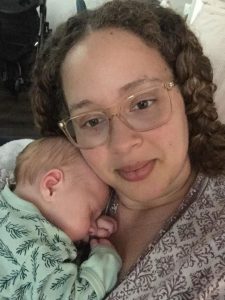 Eventually the dawn came, the storm stopped, and I had no idea what had happened because I was working so hard! Prayer, Hypnobabies and good vibes…And Peeeeaaace.

I’ll admit, we got emotional as we passed 30 hours. I won’t speak too much of it here, but I started to become discouraged at how long the process was and the change of plans in using medications I hadn’t wanted. I was struggling with the realization that I would have to refuse or accept more interventions. I listened to the Change of Plans script, of course, and it was encouraging. I had refused additional checks but later I let a nurse I trusted check me, and it was not too uncomfortable. The on-call midwife later learned about it and she also wanted to check. I had progressed quite a bit and she seemed really excited and tried to encourage us. The doctors and midwives spoke to us about options as they gave me oxygen (mask) since I was tiring. My body was very tense, but it looked like baby was finally about to really come out!

My favorite midwife also began to take over rather than the previous on call midwife, which was a relief to me since I am more comfortable with her. We decided, after being advised in the 36th hour or so, that I would change plans yet again (peeeeace all the while) and accept an epidural. I had worked so hard to avoid that epidural, but my body was beginning to be so tense from working so hard. I never thought I would be thankful for that, but I was. Of course, this led to a change in what position I could birth in. My doula was able to give me great advice and listening to Hypnobabies, I relaxed. My doula left as she had been with us for 35 hours and there had been a tornado. She got us to a good place though.

I needed less Pitocin (half the amount they had been giving me) and felt my baby drop so low until I told them — I absolutely have to push!!!! The room was cleared except for my mom on one side and my husband on the other, plus my favorite midwife and her team. She massaged my perineum with oil, and they encouraged me as I pushed. I breathed, I PEEeeeAaaaaaCe, and I saw my baby’s head — I said— oh!!!!

After about 39 hours since water breaking and 25 minutes of pushing, after a night of tornados 🌪—- my midwife flipped out — our son!!! He immediately proceeded to pee on my husband and cry haha. We called out his name and we cried. When they closed the shades / dimmed the lights he opened his eyes and looked at us. Oh, the joy! After so long! Apparently, I did not really tear and only needed a stitch or two. I felt so much happiness and peace! My husband cut the cord, the placenta birthed out of me…We all immediately did skin to skin and were given plenty of beautiful time…my son crawled up my breast and found it! He began to suckle 🙂. We chose not to do the eye cream or circumcise, but he did get a vitamin K shot which made us comfort him. Later they weighed him, and we stayed together as we went up to our postpartum room to rest.

I am so thankful for my baby’s birthing time and the support of my husband, hypno-doula and Hypnobabies. I had an informed birth that was challenging but also peaceful in many ways. Even now my baby loves to hear Hypnobabies tracks in the evening. Immanuel is such a chill little man. In a world that began to shut down just days after his birth, we had someone to take care of. And he is doing so well!!

Many people had tried to reach us, not knowing we were at the hospital during the tornado. A school five minutes from our home was completely destroyed, and many homes in our neighborhood were destroyed and badly damaged. It seemed surreal that all this happened during our birthing time!

It was all worth it ♥️ even the challenges of the first month have made us stronger — our baby boy is such a happy one. Our lactation consultant helped us learn he had a tongue and lip tie, which was revised by laser and now he has gained so much weight at last! I have learned to be flexible and go with the flow 🌊 I am so thankful!!