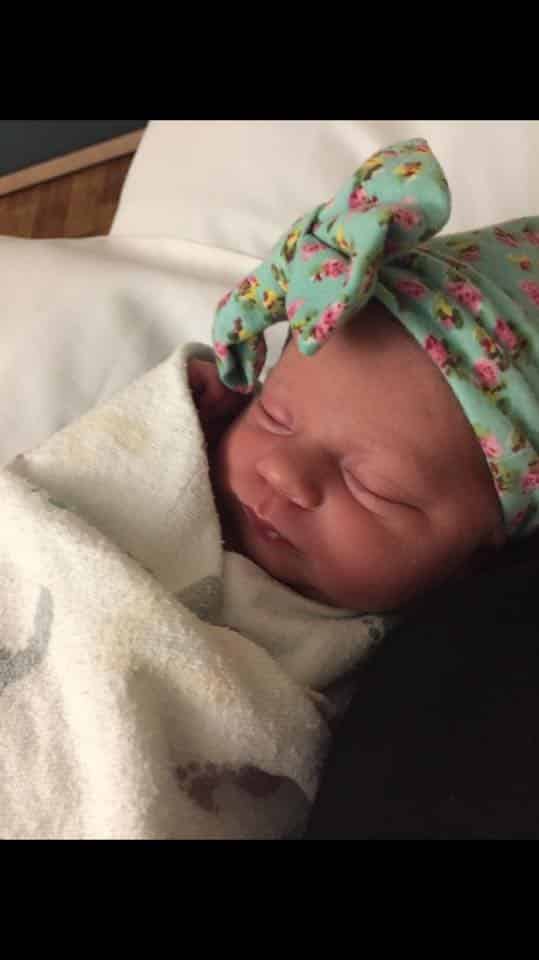 “Margaret Louise arrived after 8 hours of pressure waves. As it turned out, my estimated 9 pound baby was actually only 6 lbs. 3 oz.! Just like I had predicted, the doctors had measured me incorrectly. I am so glad that I decided not to do an induction. I’m very thankful for Hypnobabies encouraging me to trust myself and my body as well as my baby to know what was best.” 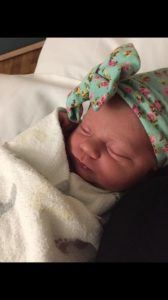 My pressure waves started around 7:30 PM on October 2nd. I was 39 weeks and 4 days and had been listening to Come OUT Baby track the past three days as my doctor was concerned that baby was getting too big (More on that later). I was watching Boy Meets World and snacking on some dates when I realized I was having consistent pressure waves that were much more intense than I had experienced yet. I was unsure if they were real, so I messaged two close friends with what I was feeling and they agreed that it sounded liked my time had started!

I decided to start timing them and sure enough, they were lasting a minute and coming every 4 1/2 to 5 minutes. I let my husband know this might be it, and to get ready, just in case. He had been trying to fix up the crib and was busy making adjustments. I wanted to bake cookies for the nurses, but I didn’t know if there was time, so we skipped that. It’s my only regret of my birthing day!

I wanted to dry my hair from the shower I had taken an hour before, so I started on that process and worked through my waves. I started to notice they were picking up in intensity, so I decided to lie down on the couch and put on my Easy First Stage.

My pressure waves got very intense very fast, and were coming closer together, so after about an hour at home, we decided to head to the hospital. I played my track in the car and turned off my light switch for the 20 minute car ride. I was able to walk to check in and then nurses thought I was there for a scheduled induction because I was so calm.

After we checked in, they estimated I was 4 cm dilated by 9:30 PM. I wasn’t discouraged because I felt that went quickly for only starting my birthing time 2 hours prior. I felt good and I was thinking positive.

The nurses were fabulous and respected my plan to a T! They commented on multiple occasions that they couldn’t believe I was attempting a natural birth as a first time mom. My husband started my tracks for me again as soon as we were settled in our room.

My waves became so intense, I didn’t want to move. I spent most of my birthing time sitting up and hunched over. I couldn’t make it to the tub or the yoga ball, as my waves were long and I had little respite in between to center myself. I tried to focus on my tracks and stay calm. There were moments I felt like giving up, but I kept thinking, “I was made for this. I am strong and my body CAN do this.” Those affirmations were solid in my mind and were a godsend. It was what helped me through the moments I thought I wanted to give up. My husband was a great coach, and kept periodically placing his hand on my head and on my shoulder giving me cue words like Relax and Peace. I kept my eyes closed the entire time, and tried to focus on staying in my state of hypnosis.

Around 11:30, they checked me again and estimated I was 8 cm dilated and called the doctor. I was so happy! But when the doctor arrived at 12:30, she realized the nurse had guessed wrong and I was really at a 6. I wanted to give up at this point, but it was the nurses that were encouraging me to keep at it. My husband was amazing as well. I didn’t have a doula, and I didn’t need one. He was amazing. He did everything right, and tended to my every need. I could not have done it without him.

Just an hour later and I was at 8cm. By 2:45 AM, I was ready to start pushing and by 3:29, our baby girl had arrived. The nurses and doctors were encouraging me to “purple push” but I ignored them and listened to my body. I rode the waves and let my body take charge. I only had a small first degree tear and needed two small stitches. Margaret Louise arrived after 8 hours of pressure waves. As it turned out, my estimated 9 pound baby was actually only 6 lbs. 3 oz.! Just like I had predicted, the doctors had measured me incorrectly. I am so glad that I decided not to do an induction, and ignored the doctor’s recommendations. I’m very thankful for Hypnobabies encouraging me to trust myself and my body as well as my baby to know what was best.

My birthing day was hard, I won’t lie. But it was beautiful and empowering. I had nurses coming in to meet me because they couldn’t believe what I had done, and I was the talk of the ward! Even after we checked in to our room, they were commenting on how well I was bouncing back. Two days later and I was almost at normal. That has been such a blessing, and I’m so thankful for Hypnobabies. I could not have done it without this course.