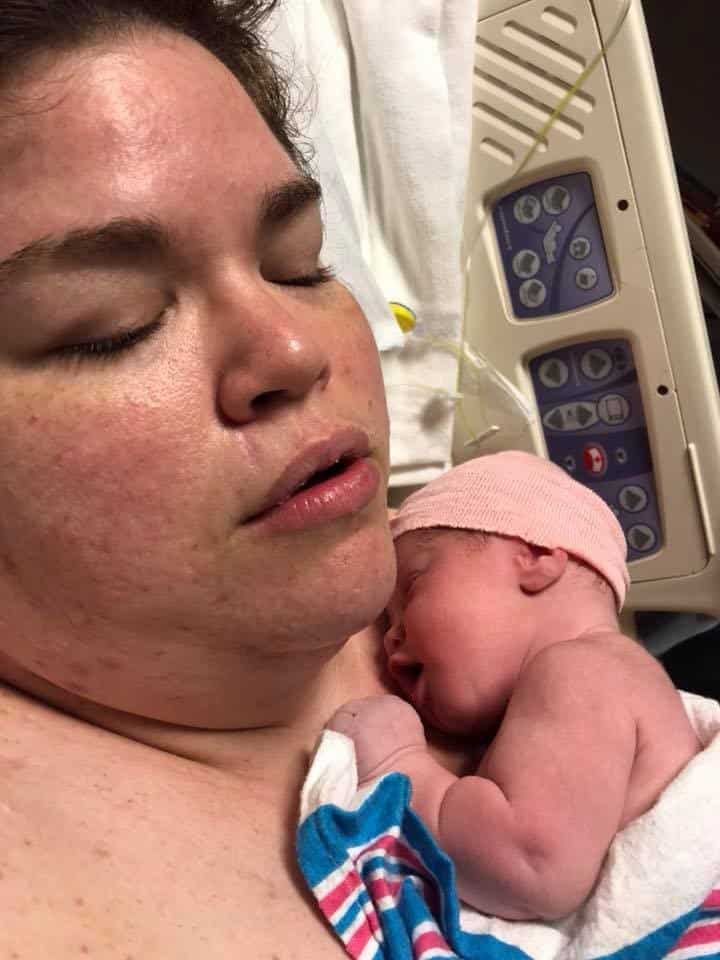 I used Hypnobabies throughout the first 24 hours of waves and found it incredibly helpful. After those early stages, my water broke Sunday night and we headed to the hospital. 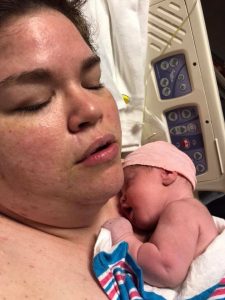 Since the day I hit 40 weeks some of the doctors at my office were pressuring me for an induction/surgery for my “big” baby. Since I am overweight, I have frequently experienced doctors making assumptions about my health, telling me that I have diabetes and high blood pressure, without the slightest shred of evidence. (Both are picture perfect BTW.)

The Friday before birthing day, I met with a doctor in that practice I’d never seen before of that same mentality. I was traumatized by the things he was saying during the high pressure used car sales pitch for surgery for our “big” baby (estimated at 10 pounds 4 ounces).

I didn’t gain much during pregnancy, and honestly assumed bias on the part of the ultrasound tech too. I didn’t consider the “big baby “argument or post guess date (at 40 weeks on the dot no less!) medical necessity, especially since risks of inducing (dilated to zero, 60% effaced) and/or surgery were ever discussed. (Completely risk-free right?) Sometimes hammers are incapable of seeing anything but nails.

I had planned the entire time to work with their midwives for birth time, and I’m so glad I did. They were huge advocates for my wishes for a joyful birth day.

When I got to the hospital, my water had broken but I still had not dilated after 24 hours of inconsistent waves (Hypnobabies for contractions). I was told it could have been due to cervical scar tissue from a previous medical problem or that “big” baby. The midwife did at that point suggest induction or surgery but gave me time to progress. Unfortunately, after several more hours and an additional intervention of a prostaglandin, I was still at zero and it just broke my spirit. I spoke with another doctor who outlined my options. I could get surgery or keep trying with Pitocin. I still wasn’t ready to commit to surgery but couldn’t imagine having the strength to continue having waves, so I accepted augmentation with Pitocin and an epidural.

It was a welcome relief to rest and got me dilated and ready to push. After two hours I was making progress, but baby was starting to struggle. The doctor that was on call at this point did the CYA speech about the necessity of surgery for the 10 pound plus baby, but I was so close. She went away but rushed back a few minutes later because baby was in distress. She pushed everyone out of the way, gave me an episiotomy, and got baby out. Turns out baby was sunny side up and no one realized it?!?! Because they kept assuming she was so big I guess they never considered other complications? I’m still irritated at some of the doctor’s condescending comments and attitude, but I’m grateful she handled the emergency.

Thankfully we were both fine. Baby Daphney was born on 6:18 Monday evening, 7 pounds 12 ounces (ahem!) and 21 inches. Ironically, I would have considered sunny side up a medical emergency and gotten surgery right away had I known. I’m glad I didn’t though, and it worked out as it did.

I am so grateful for Hypnobabies for helping manage fears and the discomfort during waves during birthing time (Hypnobabies word for labor), but more so the constant reinforcement to trust my instincts and not let myself be browbeaten into something that I wasn’t comfortable with, something that also carries considerable risks. I’m also grateful my husband stood up for me as well, rather than just accepting a professional recommendation at face value without thinking it through. I appreciated his trust in my intelligence and my research into the whole birth time process.

Thank you for reading and thanks to Hypnobabies. It allowed me to handle all my fear, anxiety, and discomfort. I’ve also been using techniques for learning to nurse as well. After all that, I already feel more confident as a FTM and feel like I can do anything.  🧡 🧡 🧡