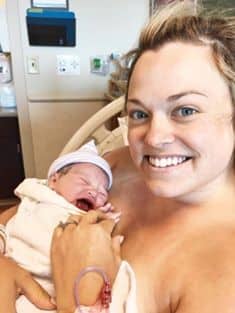 “Elise was so alert, and nursed right away for an hour and half! It was pure euphoria!!! Recovery has also been so amazing thanks to trusting my body and allowing it to do what we are intended to do!”

We are overjoyed that Elise Gwendolyn joined us on July 5 at 5:03 PM. Here is the story of our birthing time! It was fast and intense, but I arrived at hospital just in time to push baby out  ? 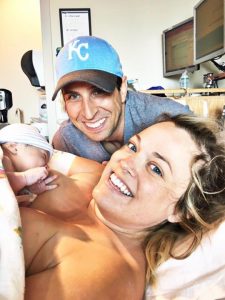 I just recently discovered Hypnobabies at 32 weeks pregnant by my prenatal yoga instructor (also a Hypnobabies doula) and prior to that had no intention of an un-medicated birthing time. However, once beginning the at-home study, it became instantly obvious why my birthing time with our first born was not something I wanted to repeat. It was a medicated birth and a long recovery due to interventions and baby’s position. I also struggle with anxiety and felt as though these techniques were something that baby and I would benefit from in the long run. So I dived in and was super disciplined about completing the home study course. The hypnosis tracks eased my worries I had been having, and the Joyful Pregnancy Affirmations were so refreshing.

A couple of weeks ago, my husband and I decided to hire a Hypnobabies doula and it was so valuable for us during the two weeks leading to our birthing time and during our actual birthing time. We were having our baby in a hospital that has a pretty high intervention rate, with a doctor whose patients rarely go un-medicated. But, after going through the course, I felt so empowered that it was my birth and didn’t matter where or who delivered baby.

I began having prodromal birthing a couple weeks before Elise was born, and our doula was able to walk us through different positions and ideas to get baby into optimal positioning for her birth. On July 4th, while watching fireworks, my pressure waves began again, and felt like the prodromal waves I had been having for weeks. However, after about an hour, I knew we would be having a baby very soon.

That night I had waves all night that required me to focus and I was unable to sleep through them. By the morning, my mother came and got our daughter and my husband and I just focused on relaxing. The waves were not picking up and remained the same length and duration for several hours, so our doula recommended the Miles Circuit to see what would happen.

My goal was to arrive at hospital right before transformation so I could get in hypnosis, and have enough time to be treated for positive GBS. However, it was not what happened  ?  After going through the Miles Circuit poses, everything sped up fairly quickly, and I was having to really focus on listening to my tracks. During this whole time, there was only pressure, and I could see and feel the waves. It was pretty amazing!

We called our doula around 3, and asked her to come over to help assess my progress. She arrived about 20 minutes later, and I asked to get in the shower. She suggested I shower at the hospital and we get moving to our next destination. But, I couldn’t seem to get out the door, because waves were coming back to back, and I enjoyed counter pressure to ride them. I also noticed that if my hypnosis tracks ended, or I couldn’t hear them, I would immediately get tense and my shoulders would go to my ears. I struggled to get through those waves, but with help from my doula and husband, once they assured me, and tracks got back on I could refocus within a few moments and push through.

The car ride, was the least enjoyable part of my birthing time, because looking back, I now know I was going through transformation at that time or had already gone through it, so I struggled to focus without the counter pressure on my back, and in the different environment. But, I kept expecting it to get worse, and it never did. We made it about a block away before I felt like bearing down and told my husband the baby was coming. I started to take off my shorts, but he reassured me and I was able to refocus at that point.

We only live 5 minutes from the hospital, so at that point everything progressed extremely quickly. Once inside, I remember asking the nurses if I could skip triage. They gave me a side eye, and let’s just say they didn’t think I was as close as I was. I kept thinking I just want to be at least a 7 when she did her cervical check upon admission.

I still had my sunglasses and headphones on when I was in triage and wasn’t listening to what was going on, but she did her check and all of a sudden a ton of nurses where on each side of me, taking me back to our birthing room. Our doula whispered in my ear, “You are complete, with full bag of waters. Time to have your baby.” I just started crying at that point out of pure joy! I had done it and was so excited to see our little girl. It was the best feeling in the world  ?

Once in the room, there were about 8-10 nurses scrambling around us, prepping as fast as they could, but I was able to focus and had no idea so many people were around us until after baby came out. My doula kept telling me to focus on my hypnosis tracks, and they would do what they need to do. I even had two people working on an IV, but was totally unaware!

Our doctor showed up fairly quickly and didn’t even have time to take street clothes off before I started pushing. I am pretty sure I still had my sunglasses on too! At this point, things got pretty intense.

The baby was descending so quickly and they were unable to get a good reading on her heartbeat, and the doctor needed me to get on my back. So, my body literally took over at this point, and it was almost like an out of body experience. I just did what they needed me to do to get out her safely. They put oxygen on me, and had me switching from side to side until they could get her heart rate back. It only lasted about 30 seconds, but it was an intense time for me. I pulled all the focus I could to make it through, and am so thankful for all my tools!

At that point I was struggling to not push, and the doctor needed baby to recover so she had to hold her in for the next wave to get heart rate stable. I will never forget this feeling. It was not painful, just extremely intense. Then, the doctor looked at me and said I need you to push this baby out right now, so I did! Within a few pushes, she had me reach down and catch our sweet girl! It was truly the best moment of my life. 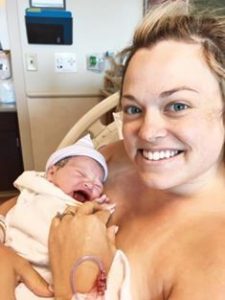 Elise was so alert, and nursed right away for an hour and half! It was pure euphoria!!! Recovery has also been so amazing thanks to trusting my body and allowing it to do what we are intended to do!

I am so thankful for this group and Hypnobabies! Even though my birthing time was not what I planned and was pretty intense towards end; I am still on a high, and so excited to share with others about this program!

I listened to Fear Clearing early on, and Birth Affirmations on repeat. Then, as things progressed I listened to Easy First Stage Birthing track, but my favorite was Deepening Your Hypnosis and helped me the most  ?