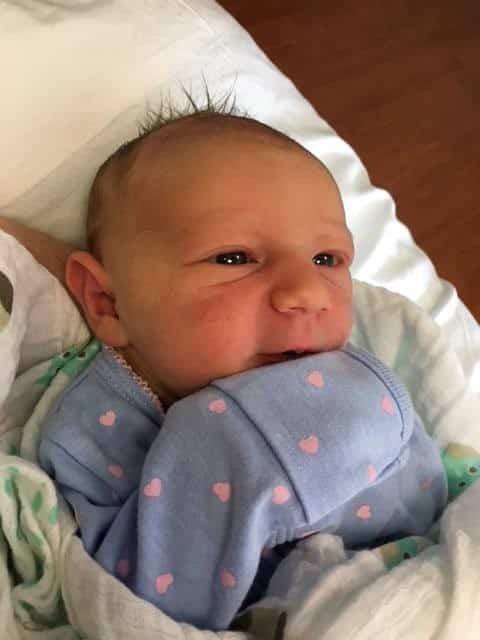 “I had all of the tracks playing the whole night and just hearing them kept me so focused on hypno-anesthesia. Plus, my husband and doulas were often repeating the cue words and phrases, which was so amazingly helpful to keep me staying calm.” 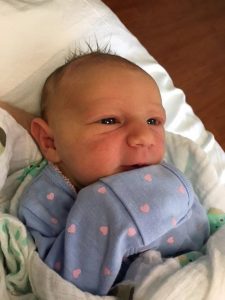 I think I finally have a moment to write about my birthing experience! Jessamine Lee was born on 5/10 at 5:10 am! My guess date was 5/2.

I started having practice waves at week 38, which were on/off for a few days in a row 15-30 minutes apart, mainly at night and then stopping during the day, ensuring that I had very little sleep for work. By my guess week, I decided to start my leave of absence because my waves were still inconsistent, and I was 1 cm dilated for a few days.

By the end of my 40th week, my OB told me that they do not like to go past the end of week 41 and we should discuss options to induce and make an appointment, but he really didn’t think I would make it much longer. We tried to make an appointment to induce with Cervidil, but the hospital birth center was fully booked, if you could imagine! My OB wasn’t too concerned because he has devious ways of getting his patients in. I wasn’t concerned, but I was hopeful that I would not have to be induced.

By the following Friday, I was starting to have stronger waves, but they were still on/off and 15 min apart. My doctor checked me and I was 2 cm at this point and he felt strongly I would not make it through the weekend. PS, the waves got very strong and 6-10 min apart Saturday night and my husband and I spent the whole night timing waves [this was dumb, don’t do it! better to have sleep! Then Sunday everything stopped. I had another appointment on Monday and my OB was disappointed to see my name was not on his list from weekend births!

My doula asked me if I’d had any issues/surgery with my cervix, and I did, which she thought might have led to some scarring, which could be preventing the dilation. At 6:20 am I woke up in a pool of water (good thing we bought that $100 mattress cover sheesh!)! I was very excited. I called my doula immediately, she was actually on her way to her one other client, who was also in her birthing time!! No worries, we had a backup doula who I love, too. There was a slight meconium tinge in the fluid, but they weren’t too concerned. We had a plan to go to the hospital when my waves were within 2-3 minutes apart (I live 3-7 minutes to the hospital depending on bridge traffic), so I could spend most of my birthing time at home.

My doula came over at around 9:00 I think. My waves were still around 10 minutes apart and not super intense at all. I was doing spinning babies exercises because she was still posterior, and also doing stairs exercises. I just was not really progressing. By 2:00, we decided to head over to the hospital since my water had broken with meconium. Now, it was about a full moon. Apparently every pregnant person in the area was *also* going into their birthing time! They kept us in triage for a while because there were no rooms in L&D. I had a major adult tantrum when they put the IV in my hand and my husband had to call my mom to calm me down–I felt like a loser, I did not listen to the needles track because I was ignoring the problem I knew I had! My doula was not impressed. My OB was beside herself. The nurse was extremely concerned that there was no way I would be able to deliver without an epidural! However, another nurse finally got the IV into my arm and it didn’t hurt at all and the world was back to pleasant again. All the while, my waves did not progress enough, so they kept me in triage. They were getting very intense, but my Hypnobabies doula had me walking down the hall and showed me exercises and repeated all the cues for me with my husband, I honestly felt very good throughout it all.

The OB told me that they would not let me keep the baby inside past 24 hours after my water broke. She is not a big believer of Hypnobabies, but she was my doula’s OB for one of her children and they joke about it–they are very close, my doula used to be a nurse in L&D. The OB gave me the option of waiting for an induction or starting it sooner. I decided to start it as soon as I got a room because we had not slept the entire night before and I was concerned about starting Pitocin after exhaustion. I wanted to be as fresh as possible to handle it. I got a room at around 7pm and they started the Pitocin, which was another psychological ordeal for me, but we used our Hypnobabies tools and it was ok.

As soon as the Pitocin went in, there was a HUGE change in my waves! Everything they say about Pitocin waves was spot on for me, very very very intense for a very short time, then stopped for 30 secs to 1 min. I was glad I read about it and also thought it was pretty cool, even though it was very intense I was at 3 cm for a few hours. Cervix was stuck on a scar. It was difficult for me to stay in the same position for a while, but my doulas always had new positions for me–every time I moved, it brought on more intense waves, so I was not inclined to want to move, but my doulas were sooo amazing at helping me and motivating me and keeping me calm and relaxed mentally.

At some point I lost the ability to communicate–I found that oddly amusing. I was thinking of what I wanted to say to people, but I had lost my language skills! However, all of the Hypnobabies cue words I still could say–so I would say “Wave!” or “Orange!” or “PEACE”. Several hours into the wee hours of the night, I was at 4 cm and my doulas decided to move me onto the toilet. That really really worked!!! In fact, it kicked my body into having involuntary pushing, which was one of the most amazing things I have ever experienced. Then my doula told me that I had to not push because at that point I was only 6 cm dilated. She showed me a breathing technique that my husband helped me with, which really helped. After an hour or so of that, which was even more exhausting, my doula put my husband to bed and decided to wake him up when I started pushing.

We needed to get the OB in to check that I was fully dilated and OK my pushing–I was at 9cm for a while and neither the nurse nor my doula felt comfortable with allowing me to push. This was a very crazy time. My OB had several other patients that were in greater need than myself, I seemed very calm and “OK” even though I wasn’t all “there” and I wanted like nothing else to push the baby out!

Finally, at around 4am (and believe me, I was still able to read the clock and I was getting worried that the 24 hours were going to be up soon!), my OB came in and she gave the OK for me to push! An hour later of pushing and my baby Jessamine came right out, fully alert and starting to scream! They put her on my chest and I was so happy! My OB told me to push the placenta a little, I barely pushed and it was out. I think it was just a few minutes after Jessamine, but who knows. I didn’t feel that at all. 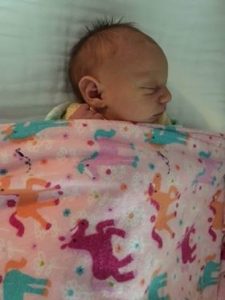 Honestly, without my doulas and Hypnobabies I am *sure* that I would not have been able to get through this experience without ending up with a C-section because they really really really kept me going, they always had new tools up their sleeves to keep me going, they kept me mentally together. My playlist got messed up, but it didn’t matter–I had all of the tracks playing the whole night and just hearing them kept me so focused on hypno-anesthesia. Plus, my husband and doulas were often repeating the cue words and phrases, which was so amazingly helpful to keep me staying calm even when I felt over-exhausted and experiencing the very intense waves. It was amazing. The nurse was amazed, she couldn’t believe how well I took it, she thought for sure I would be screaming for an epidural! I never once felt I wanted to go down that rabbit hole!

When I first came up with my birthing plan, I really did not think I would want any relatives around at all the week or so after the birth, but after the birthing and especially due to the sleep deprivation and tear, I really wanted people to help me in the house! 2 of my best friends came over and they brought pizza, beer, and the most amazing pastries. It was great because we had very little food in the house. My mother came and helped a lot, too. And brought food.

Oh! And I got an awesome new job, which does not start until the fall (college faculty position). I resigned from my current job and I’m taking the whole summer off!