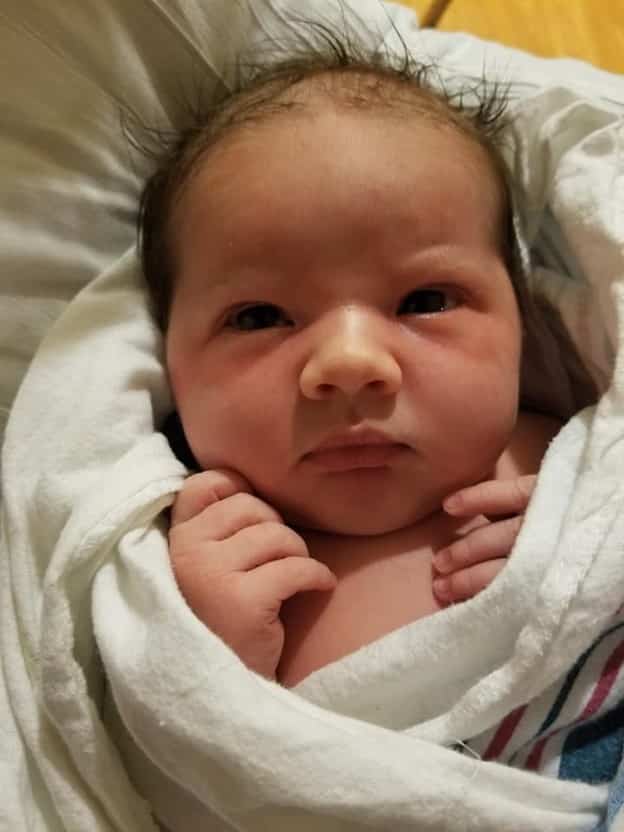 “My waves were still very strong and coming within minutes of each other the whole drive. He used the Relax cue (Hypnobabies tool to deepen hypnosis) which helped a ton and I basically said Peace (Hypnobabies cue for instant physical comfort) during every wave.” 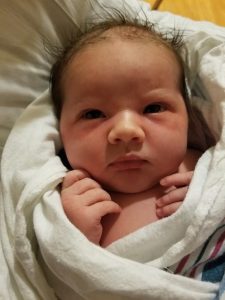 On 3/18 I woke up and got my kids ready for the day. I was feeling some pressure but had been feeling a lot of pressure and practice waves for weeks. I never had practice waves with my first 2 babies, with them waves (Hypnobabies term for contractions) started quickly and strongly at 3 minutes apart and I was ready to push within 3ish hours of my first wave.

I was waiting for my mom who was supposed to come at 11 am to help me with my kids as I was scheduled for an induction on my guess date (Hypnobabies term for due date) 3/19. Because of my scheduled induction I had a Covid test earlier in the week (which was negative). While waiting for my mom I was juggling 2 toddlers who were trying to feed the dog and keep them quiet for my nephew who was also doing online school at the table. I felt I needed to go to the bathroom, and just as I had the opportunity to go my mom knocked on the door.

So, I was feeling a lot of pressure, but felt it would be relieved if I could just make it to the bathroom! However, after I got my mom settled with the kids and I’d spent 30 minutes in the bathroom I realized there was more going on and I had a strong wave that was similar to how I felt with my previous births. I still wasn’t sure if it was a one-off thing or not, but I texted my husband that he needed to be ready to leave as I thought it might be the day. By now it was 11:30 am. Less than 10 minutes later I texted him to come home now.

I laid on my bed to get into hypnosis and started the Easy First Stage track (Hypnobabies main birthing time track). After a few waves I told my mom it was time and to call my husband to make sure he had seen my texts. I could tell everyone was excited, but I went into my room and knelt on the floor and rocked on my yoga ball until my husband came home. He was very prepared, grabbed the hospital bag and helped me out the door and into the car. 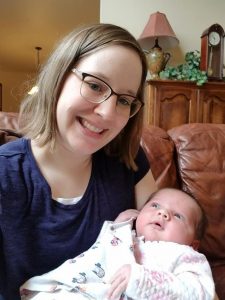 My waves were still very strong and coming within minutes of each other the whole drive. He used the Relax cue (Hypnobabies tool to deepen hypnosis) which helped a ton and I basically said Peace (Hypnobabies cue for instant physical comfort) during every wave. When we got to the hospital he asked if he should drop me off or if I wanted to walk. I wanted to walk, so he parked, and I had 5 waves between the car and the door. In hindsight I should have had him drop me off, but I didn’t want to be away from him for even a second. During each wave I leaned heavily on him and relaxed as many muscles as I could.

When we got to the hospital I sat in a wheelchair, but during each wave I turned to face the back with one knee on the seat. They had to take our temps at the entrance, and I snapped a bit at the person who was trying to take my headband headphones off during a wave. After the wave she got my temp, we went to the main check in where I was told I could only have one visitor. I was confused, as our hospital had said no one was allowed in triage, but 2 support people were allowed in the birthing room. I didn’t care too much though as I was focused more on my waves, and my mom had unintentionally missed my previous births because they were so fast. My husband pushed me to triage while my mom stayed back. I didn’t know it at the time, but Covid rules had changed that day so 1 person was allowed in triage and 2 in the birthing room, so that’s where the confusion was. My mom was able to follow us up before too long, although I was unaware of whether she was there or not until after Noelle was born. 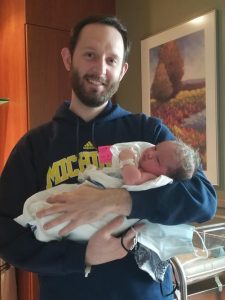 As we reached the triage desk I stood at the counter, filled out the short form they had and said in between waves, “this is my 3rd baby, she is coming now”. They immediately had a nurse pushing me in the wheelchair to a triage room.

As soon as we got there I moved to kneel by the bed. I focused on my hypnosis while my husband gave them my birth plan and answered questions. I let them know I had a negative covid test and was glad not to need a covid test at that time. They helped me get most my clothes off and get into the bed where they checked dilation (I didn’t hear at the time, but I was 9cm), and then rolled me on the bed to a birthing room. They had me move from the triage bed to the birthing room bed where I asked to have the back of the bed up so I could be on my knees facing the back of the bed. They were quick to respond to my request and I was finally able to stop moving and try to relax during each wave.

At this point I had a bra and tank top on, and my husband’s hands were warm as he put them on my shoulders to say “Relax” and that helped me a lot during my birthing time (Hypnobabies term labor). I continued to say “Peace” with each wave, and my midwife asked whether or not I would like her to break my water. I said if it would help her come faster than yes. She broke my water, and about this time I accidently hit the pause button on my headphones against the bed and it took a minute to figure out getting the tracks running again. I was able to stay mainly in hypnosis but was a bit frustrated. My husband used the Relax cue while my mom got it playing again. My midwife let me know there was meconium in my waters and the pediatrician would be at the birth. Everything may be fine, but if baby seemed distressed then they would need to cut the cord sooner to care for her. This made me a bit anxious, but I just chose to just focus on the one thing I could do- give birth!

Not long after my water broke, I felt my body starting to push. I told my husband to start the Pushing Baby Out track (Hypnobabies track just for pushing). My midwife asked if I had birthed in this position before. When I said no, she explained how she would hand baby to me and how I would turn over after birth. However, she also said she wouldn’t be able to protect my perineum very well in the position I was in but could better protect it if I was laying on my side (which was one of the positions listed on my birth plan). 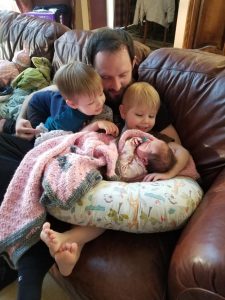 BOP- I had 4th degree tears with my first baby, 2nd degree tears with my second baby, and a very negative experience birthing on my back with my second. I didn’t know it at the time because for the majority of my birthing time I was completely focused on the tracks and ignored everything going on in the room, but my husband had quietly told the nurses and midwives that I had previous traumatic experience giving birth on my back, and they were thankful to know to avoid suggesting in any way that I lay on my back.

I decided to lay on my side to push. It took me a bit to get into position as my waves were still coming very quickly. Once I was laying on my side, my body was not only pushing on its own, but telling me to push as well. I was very vocal during most of my birthing time, but especially at the end because making sound felt productive. I definitely roared her into this world!

My midwife told me how to move my legs to better open my pelvis, and with the next push I felt some relief and a huge gush. I was confused though as I still felt a lot of pressure like she wasn’t out. My mom said, “her head is out!” and I realized that unlike my previous kids, her body didn’t just follow the head out in one push. I pushed two more times and her body was out. She was put on my chest and the pediatrician quickly suctioned her (because of the meconium) and visually checked that she was fine. They helped me get my tank top and bra off so I could do skin to skin, and I was able to cut the cord after a while. She stayed on me for a while as I pushed the placenta out, she nursed, got her shots, and we were both checked out by the doctors. I only had a small first-degree tear that my midwife stitched, and I was so happy to have so little tearing compared to my previous births! My midwife said, “that was some awesome mother directed pushing”. 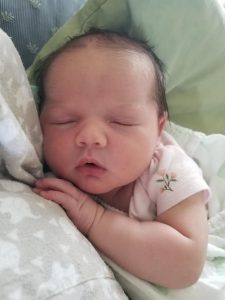 Noelle Jane was 9lbs 3oz, 21.5inches, my biggest baby! She was born at 12:56 pm, less than an hour and a half after my first birthing time pressure wave. In the end my birth was not discomfort free, but I felt a million times more prepared during pregnancy, and I know I couldn’t have remained so calm and focused during my birthing time without Hypnobabies. I told my husband I was unaware of things going on around me most of the time, but it was great to have the Hypnobabies tracks to focus on, and I think trying to relax through the waves really helped me listen to my body. He said everyone pretty much just standing back watching and waiting, except for the midwife who helped support me when moving and talked with me when I needed to know something. After seeing my previous two births he was nervous about having another negative birth experience but was glad that things went so much better this time.

I am so grateful for Hypnobabies, I am grateful that covid rules for the hospital changed the day I gave birth so that my mom and husband could both go to the postpartum room with me, and they could both be there for the birth. I am grateful for the nurses and my midwife who handled my precipitous birthing time calmly and quickly. I am beyond grateful that Noelle and I are healthy and that unlike my previous births I am able to focus on my baby and physical recovery instead of needing to work through the emotions of a negative birth experience.

Thank you to all those who shared your birthing stories! They were so helpful as I prepared for this birth!