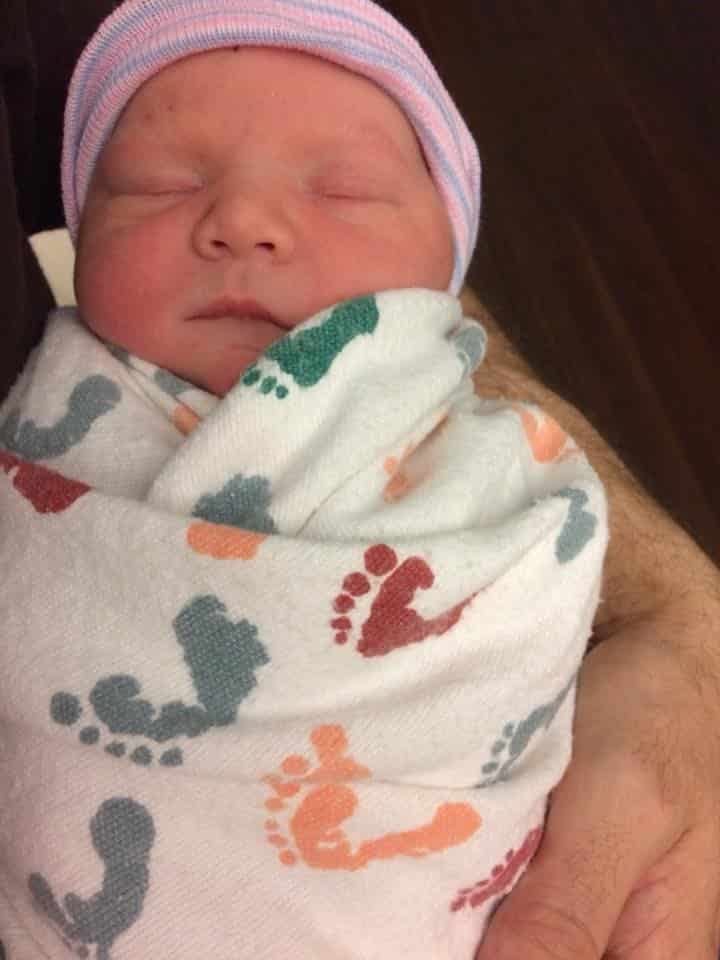 “As I was washing my hands I felt a wave and strong pushing feelings and I looked at myself in the mirror and thought “uh oh.” I came out and said to the nurse, still calmly “uh…I hope my midwives get here soon because I feel like I need to push.”

Hypnobabies Childbirth Education really does help you enjoy a much easier and more comfortable birthing! Use code hypno1528 for 10% off our Hypnobabies Home Study Courses.

Been having practice waves (Hypnobabies word for contractions) between 5-20 minutes apart for a month. I actually made a post complaining about it yesterday. Yesterday was 39+6 and started to feel some stronger waves around noon at church. Came home feeling cranky and fatigued and had my husband put our 2 yo down for a nap. The waves kept getting stronger and I thought these were feeling more and more like the real deal, so I timed some, but they were all over the place – 10, 7, 8, 5….you get the idea. Called my midwife to see what I should do, and she said to keep an eye on them. 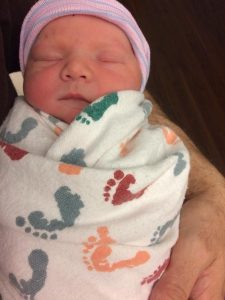 Decided to listen to Your Birthing Time Begins track (Hypnobabies reminder of all tools to remain comfortable) anyway. After that, I did Special Safe Place (Hypnobabies track that takes you to a special place with your baby) to see if I’d fall asleep and the waves would stop. They didn’t. Midwife called around 2 to check in and I’d been timing some more, and they were 4-5 min apart but so easily manageable I didn’t think they were going anywhere. I’d had consistent waves every afternoon/evening for at least a week that would always fizzle out. The midwife suggested I take 50mg of Benadryl and try to sleep. She said if the waves were too strong to sleep it was probably “go time” and if not, I would get some rest and either wake up in my birthing time (Hypnobabies word for labor) or wake up to find they’d stopped.

By this time my 2 yo was up and being two (and I think she knew something was up) and was being extra loud and I felt like I couldn’t deal with the noise and distractions. Had my husband call my dad and say he was dropping her off. I still felt like I probably wasn’t in my birthing time yet because the waves were so easy to manage with hypnosis, and I made a comment about how I’d feel bad bothering my dad if this was just a false alarm, but I needed a quiet house.

Dad lives 30 mins away so while my husband was driving her there I listened to my Birthing Day Affirmations with my switch in the center (Hypnobabies technique for being in hypnosis while up and moving around) and tidied up the house/packed some bags just in case. Also called my doula to give her heads up that maybe this was birthing day, but I told her it was probably going to be a while because the discomfort was so manageable.

Husband picked up some Benadryl for me on the way back home. I decided to take it and listen to the Deepening Your Hypnosis track (Hypnobabies track to deepen level of hypnosis) to see if I’d sleep. He asked if I needed anything, but I still thought things were fine and it probably was very early in my birthing time, so I told him to just relax downstairs, shower, whatever and I’d come to get him when I felt I needed support. Listened to Deepening and the Benadryl didn’t make me sleep. So, after that ended I decided to put on the Relaxation music and time some more waves.

Kept my switch in the center because it felt better to move around during them. They were stronger, and I was vocalizing like a hum almost through them, but they were still easier to get through than I thought active birthing waves should be. I was disappointed to find that they didn’t have a pattern after timing five of them – they were inconsistent between 4 and 7 minutes. I was timing the sixth when my water broke. I’m GBS+ so I knew that meant we needed to go to the hospital even if I wasn’t that far along.

Told husband calmly to pack up the car while I called midwives and doula. This was about 7 pm. I listened to Easy First Stage (Hypnobabies main birthing day track) in the car and the ride was bumpy and unpleasant, but I continued to vocalize through waves. Apparently, I was in transformation (Hypnobabies word for transition) at this point, but the hypnosis kept things so manageable that I was just praying to be at least 5-6cm when we got there.

Checked in and went up to triage and my birth team wasn’t there yet. The nurse asked me to pee in a cup, so I went to the bathroom. As I was washing my hands I felt a wave and strong pushing feelings and I looked at myself in the mirror and thought “uh oh.” I came out and said to the nurse, still calmly “uh…I hope my midwives get here soon because I feel like I need to push.” I also felt a little shaky and nauseous at this point. The nurse didn’t really take me seriously because I was so calm about it (I was still listening to Easy First Stage at this point with one earbud in). She tried to hook me up to the monitor. Had another wave and my body pushed involuntarily and I turned to my hands and knees while this poor nurse was still trying to hook me up and I said, “I’m serious, this baby is coming NOW” and all heck broke loose.

The nurse unhooked everything, so I had wires all over me and more nurses came running over and told me to lay down because they were rushing me to a birthing room. They rolled me down the hall while yelling at me not to push but It was completely involuntary. We made it into the room and the midwife on call at the hospital (not mine) rushed in and my body pushed by itself again while she told me to try to slow it down and obviously I couldn’t.

I was yelling at my poor husband at this point to put the Pushing Baby Out track (Hypnobabies track just for pushing) on but no time for that either! That push I felt something in my pelvis pop and I thought “well THAT’S no good” and immediately my body pushed again, and she was out. She was born 10 minutes after we walked into the hospital and 4 minutes after we arrived at triage. The triage nurses didn’t even think I was in active birthing when we arrived because I was so calm.

They told me I birthed “like a ninja” haha and were so impressed. My doula and midwives arrived about 20 minutes later. I had a small 1st-degree tear and my tailbone is really painful (way more so than birth!) and they think I may have pulled or torn a tendon back there from pushing so fast so I have to have an X-ray later and see a doc. Obviously no time for GBS antibiotics so we have to stay 48 hours for monitoring but Amelia is doing great and nursing like a champ. I’m actually thankful for being GBS+ because it’s the only reason I left immediately after my water released. If I hadn’t she would have been born at home or in the car.

Hypnobabies was so awesome that I was totally unaware I was so far along in my birthing time until I was literally pushing her out. The end wasn’t the slow peaceful birth I’d envisioned but I couldn’t be happier. Hopefully this tendon or whatever heals soon so I can sit down again without pain! Hypnobabies is amazing!