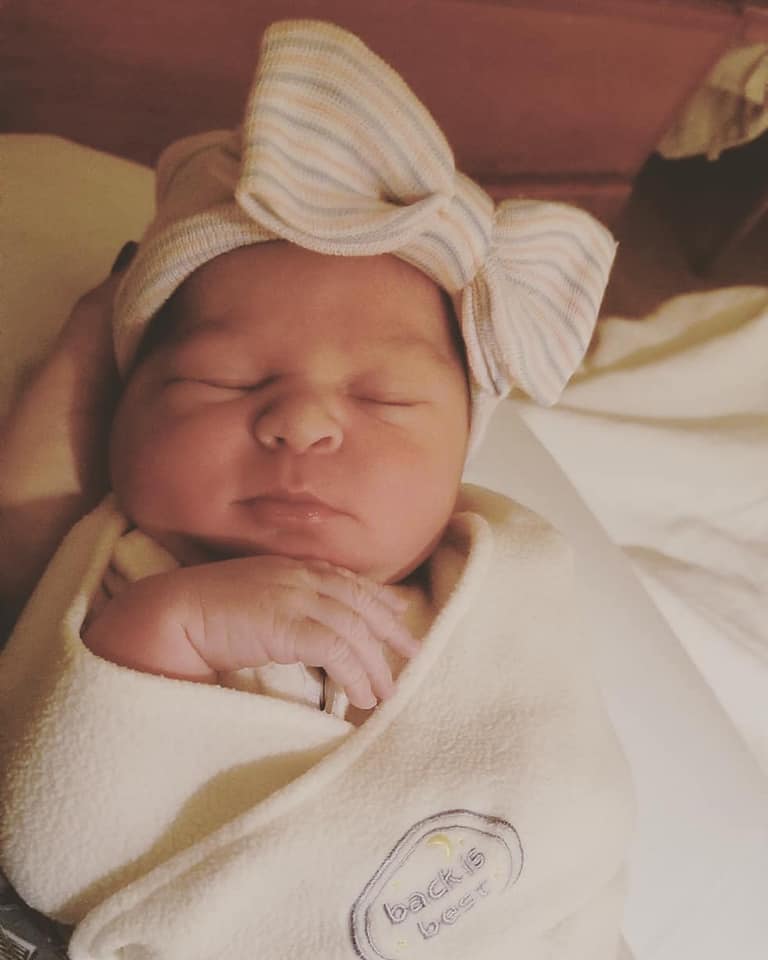 “Even on Pitocin having waves every few minutes, they were all very manageable. I would finger drop (Hypnobabies tool for entering hypnosis) down, then say to myself open open open and Peace (Hypnobabies cue for instant physical comfort) as they got stronger and rode them out.”

I’ve waited so long to share this I think because my birth didn’t go the way I had originally planned and there were times I could have advocated more for myself or made different decisions but in the end, my birth was still so healing and beautiful. I just want to give a quick disclaimer that while it might seem like my birth didn’t go the best, I actually LOVED every second of it so I don’t want to discourage anyone by my story ❤ 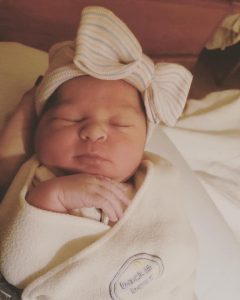 I have a 2.5-year-old son and I didn’t do anything to prep for his birth. I ended up being emergency induced for pre-eclampsia, he and I didn’t respond well to the induction process and we ended up having a c section. I really disliked my epidural experience and surgery was difficult on me so I had a lot of fear going into my second pregnancy of feeling stuck between a rock and a hard place when it came to birth. I chose Hypnobabies to help me have some type of calming/coping techniques to try and have a VBAC.

My OB was very soft-spoken as am I and she was very on board with a VBAC. Because of my prior birth, she mentioned we would try to avoid an induction or Pitocin to give my body the chance to do it on its own. Everything I wanted! I started Hypnobabies at 27 weeks and it quickly became such a safe and familiar place for me. I looked forward to bedtime every night to listen to my tracks. My pregnancy was easy and amazing, I slept well and hypnosis helped me with many pregnancy discomforts near the end. I went from fearful to genuinely excited to give birth.

At 38 weeks I started having some tightening but went about my day. I was having light waves (Hypnobabies word for contraction) a few minutes apart that ended up lasting for a solid 12 hours. I told my husband and MIL and we all got excited. We walked through Costco, I went for a long walk that evening and took a hot shower while listening to my Birthing Day affirmations.

I packed my bags and climbed into bed prepared to sleep until waves woke me up. I woke up at 5 am with nothing. It all fizzled out and I was so discouraged and confused. I spent the next 2 weeks having waves in the evening, losing my mucous plug, having some bleeding, and none of it ever progressed. It really derailed me and I began listening to the Come Out Baby track (Hypnobabies track to encourage baby to be born) and trying to do things to help them stay consistent.

At 39 weeks I told my OB about my progress and she said we could induce if I wanted. I was already 1cm dilated so we could break my water and see what happens. Because I was a VBAC she wasn’t comfortable with me going anything beyond 40w 5d. I could have waited but I was excited to meet baby and I agreed to an induction the day before my due date. I continued the Come Out Baby track hoping she might come on her own but I didn’t have any luck. The night before my induction I listened to Fear Clearing (Hypnobabies track to release any fear) and Deepening Your Hypnosis (Hypnobabies track to deepen level of hypnosis) to help me sleep. On the ride to the hospital, I started my affirmations and it took me from nervous to excited and calm.

The check-in process was very long so I was out of hypnosis. The nurses got me set up and then went to start Pitocin and I got confused. I relayed that I didn’t think that was our plan so she called my dr. to ask. I guess there was a misunderstanding and the plan WAS to induce via Pitocin. I wasn’t the most excited but I agreed. An hour later we broke my water. I was 1cm and 50% effaced I believe. I felt a little upset at my hospital experience only because it wasn’t what I was expecting.

Because I was a VBAC I had a lot of restrictions placed on me that I didn’t know about beforehand. No eating or water, had to be on constant monitoring, I wasn’t allowed out of bed unless a nurse helped me and I couldn’t lay on my side because we couldn’t keep baby on the monitor that way. 2 hours into the induction they wanted to swap to an internal placed monitor instead. I was basically stuck in bed on my back which wasn’t how I was expecting to birth since I was hoping to avoid an epidural but I wanted to make the best of my experience anyway. I had a nurse coming in every 30 mins asking my pain level because of them wanting to monitor my prior incision and it was quite annoying having to explain that no I wasn’t in discomfort and I would let them know.

In hindsight, I got thrown off having people in and out and I wish I would have ignored them all and dove into my own little world sooner! Once my waves got a little more noticeable I decided I needed to get into my tracks. I had a playlist of Easy First Stage (Hypnobabies main birthing day track) (you guys that track is amazing!) And Deepening on repeat. Since I was interrupted quite a bit I really liked having Deepening on standby for when I felt I needed to go deeper. Even on Pitocin having waves every few minutes, they were all very manageable. I would finger drop (Hypnobabies tool for entering hypnosis) down, then say to myself open open open and Peace (Hypnobabies cue for instant physical comfort) as they got stronger and rode them out.

It was such an amazing experience. For a while, I came out of hypnosis and was chatting with my husband and I realized that if I had a wave and it caught me off guard it was pretty difficult to get through but if I stopped and put my headphones back in and finger dropped beforehand they were nice and easy. The difference was crazy. I rode this out for a while. I fell asleep a few times during my Deepening track and my nurse was still shocked that I was handling it like no big deal. We started the induction at 530 am and while it only felt like maybe 4 hours, it had actually been 14 hours of having waves 3 mins apart and fairly intense.

Time FLEW by. I was starting to struggle and I hit a wall. I was debating on an epidural thinking it might help me dilate more and give me more rest but I was scared because of my past birth. I knew there was a slight chance of a repeat c section and I did NOT want an epidural for my surgery again so I told my nurse I wanted to wait and get checked to see where we were first before deciding. We started the IV fluids that I needed to finish before I could have the option of an epidural even though I was still unsure if I would request one or not. We were getting close to my 24-hour time of having my water broken which was why I was worried.

My doctor finally came in after her shift. It was 7 pm (14 hours after we started) I told her I was starting to struggle but I wanted to get checked first before getting an epidural. Her face went blank “wait, you still haven’t gotten an epidural yet?!?” She was shocked that I had gone 14 hours on Pitocin med-free 😂 we did a check and I was crushed. 1cm dilated. Barely. I hadn’t progressed at all. I asked how much longer I would be ok to ride it out since my water had broken and my dr. said we still had time so it was up to me. I had personally decided that I was ok with being done knowing my body just wasn’t responding.

I said no to an epidural and opted for a repeat c section. (Since I was a VBAC I basically could request repeat surgery at any time but I was waiting to ride it out on my own for a vaginal birth). Both my husband and my dr. gave me some reassurance that I didn’t have to choose this if it wasn’t what I wanted, they both knew I was hoping for a vaginal birth but I was at peace with my decision and was ready to meet my little girl. Once we decided, things moved fast.

I was still having strong waves during all the commotion which was distracting but I still used my techniques and no one even knew I was having waves off the charts lol. We stopped Pitocin; tons of people came in to prep us for surgery. I began shaking like a leaf from nerves. I didn’t have a positive anesthesia experience with my first c section which is why I was worried. I asked if I could wear headphones during the surgery to help keep myself calm, they said because of a tool they use they couldn’t but that someone could play the tracks out loud next to me.

I decided to forgo them altogether and just finger drop on my own. I used hypnosis for my spinal which was so helpful and during the surgery, I went into hypnosis. It was a world of difference compared to my first birth! At 7:38 pm I heard my little girl cry and they showed her for a second over the curtain. I saw a big baby girl with a full head of black hair!! 8lbs 9oz a whole pound bigger than her brother and with so much hair that I never expected. Everything went perfect. We got to do skin to skin and breastfeed almost immediately and despite what looked like a ton of setbacks I actually had such a healing birth experience and bonding with my baby.

In hindsight, there were many choices I could have made differently, and I could have advocated for myself a little more but I have such fond memories of my birth still and I wish I could go back and relive it! I have so many positive memories associated with my hypnosis tracks and even though I will most likely opt for a scheduled c section for any future babies, I still would do Hypnobabies over again just for the peace and calmness and bonding it gave to me.