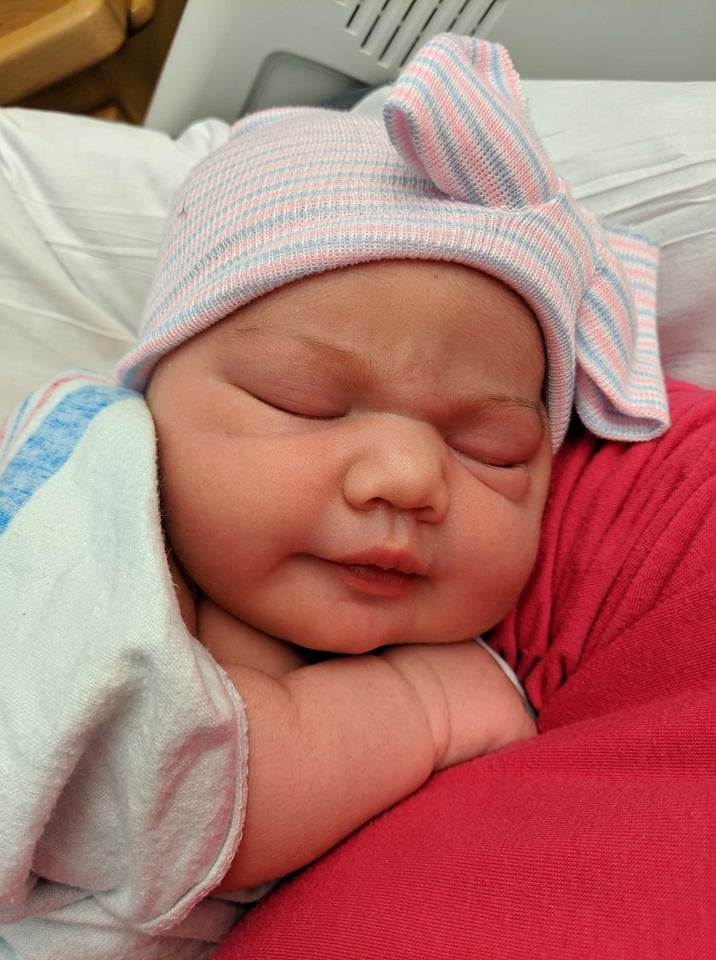 “If things seemed particularly intense for me, he would whisper “Peeeeeace” in my ear and it was shockingly effective – my body would melt completely and involuntarily and it helped so much. There was also a recurring part on the track I loved – something like “Say it with conviction: I deserve an easy and comfortable birthing time!”

I had frequent/prodromal practice waves (Hypnobabies word for contractions) during the last couple weeks of my pregnancy, but things picked up on Wednesday, June 12th: 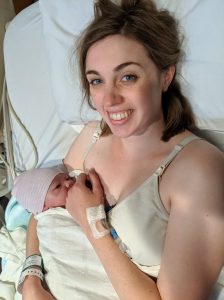 Around 9 pm I felt a little nudge that the waves were feeling stronger, (plus I was losing parts of my cervical mucus plug) and I wanted some time alone to relax and center, so I went upstairs and rested with my Birthing Affirmations track again. (This is when I consider my birthing time to have “begun”).

Around 10 pm I texted Mike and asked him to come to lay down with me and time some waves. They were still 6-7 minutes apart but over a minute long and getting much stronger. At 11 pm I called Elaine to let her know we’d probably be waking her up within a few hours to come over or to the hospital.

Mike got our last-minute things together and showered while I tried to enter into hypnosis with my tracks. I felt very distracted and looking back I should have started hypnosis a little sooner and really relaxed into it while I had time.

As it was, I was sometimes interrupted to talk to Mike about last minute logistics, and things started progressing faster than I thought they would. Mike called Elaine around 1 am to let her know that my waves were 3-4 minutes apart now and I had had a lot more bloody show. She said that was probably a good sign it was about time to go, so she was going to gather her things and meet us at our house. Mike went to pack the car while I used the bathroom and got dressed. During that process, my waves were back to back each time I moved, and they felt suddenly stronger. When Mike came upstairs, I told him we were leaving now. He hurried to call the on-call midwife to let her know and texted Elaine to reroute for the hospital. 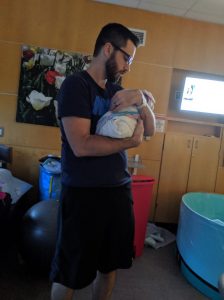 I kept my hypnosis tracks playing on Easy First Stage (Hypnobabies main birthing day track) during the rest of my birthing time (Hypnobabies word for labor) in my headphones. I tried to relax during the car ride and follow the track and did my best to block everyone out while Mike wheeled me through the hospital to the L&D floor. I didn’t talk to anyone except when necessary, but it was hard to fully block them out. In triage, they hooked me up for a 20-minute strip on the monitor. I felt too tired to stay standing up on the monitor the whole time, so I decided to lay on my side.

The waves were very hard to cope with in that position. The midwife came in to check my dilation, and per my request didn’t tell me my number. A couple of waves later my water broke, and the midwife accidentally let slip that I was only at a 4, but she thought things would progress fast now that my waters had released.

I stood to get cleaned up and immediately realized the waves were MUCH more manageable standing and I could focus on my Peace cue (Hypnobabies cue for instant physical comfort) more easily. I decided to walk down the hall to my birthing room. It took a while because every minute or so I would stop and lean against Mike through my waves, which was immensely comforting. Once in the birthing room, they needed a few more minutes of baby on the monitor, but the nurse was awesome and just used a handheld device so I could keep moving. I ended up in a pattern where I would sit on the edge of the bed in between waves (I was very tired and would half fall asleep – Mike even started supporting my head with his hands) and then stand against Mike during each wave, my head on his chest and him supporting my arms, as I was breathing and thinking or saying “Peace”.

If things seemed particularly intense for me, he would whisper “Peeeeeace” in my ear and it was shockingly effective – my body would melt completely and involuntarily and it helped so much. There was also a recurring part on the track I loved – something like “Say it with conviction: I deserve an easy and comfortable birthing time!” and my body would feel reenergized and stronger than the waves again. I found myself wishing I could have that part of the track play over and over.

To be honest, I found the waves intensely uncomfortable and had a lot of difficulty directing my hypno-anesthesia during most of this time. It took all of my mental strength and energy to think positively and not give in to fear or discomfort. Remembering the advice from others’ experiences, I chose to believe that it was working, sometimes even willing it to work. I focused completely on surrendering to my body, keeping my face and hands relaxed and allowing my body to “open, open, open”.

The hypnosis definitely helped me to shut out the world – I was completely inward, barely aware of time and focusing on each wave as it came. Per the cues in the track, I found myself relaxed and occasionally smiling in between each wave, even though the breaks were short. This was a big change from my previous birth without Hypnobabies. Mike stayed in front of me and got a workout in, helping lift me up and lower me back to the edge of the bed with each wave. Elaine stayed behind me and would very gently rub my lower back in between each wave, which helped so much for me to relax and feel comforted.

We got in the birthing room around 2:20, and so we must have gone on this way for about an hour when I started feeling my waves shift. My mind knew that that meant transformation (Hypnobabies word for transition) – my body was switching over to wanting to push soon. During my waves, I no longer felt them across my belly, but all the pressure around her head and pushing down into my pelvis, and I started slightly squatting involuntarily as I breathed through each one. I didn’t want to say anything yet because it felt too early and I didn’t want a cervical check, but it turns out the nurse at least could tell what was happening.

Around 3:40, we were done with the monitor and with my first round of IV antibiotics (for GBS), and the birthing tub was ready. They told me I could get in after I used the bathroom. My doula helped me to the toilet and while there I experienced a huge pushing wave. I cried out “My body is bearing down!” and as the next one hit right after “I can’t stop it!” Elaine assured me that that was perfect, they were all right there for me, and she helped me back to my bed, where I immediately got onto hands and knees.

My midwife and nurses gathered closer (they had wonderfully given me space, quiet, and darkness during this whole process as much as possible) and at some point did a cervical check. I found out later that I still had a cervical lip and was not quite to 10cm, but they knew I would push right past it and didn’t try to stop my powerful involuntary pushes, instead supporting by holding back the lip and by using compresses and perineal massage. 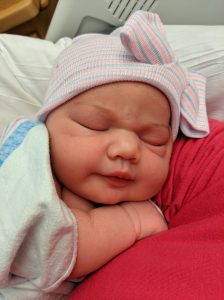 I started roaring loudly through each wave (I had been quiet most of the time until this point), just like I had read about in other natural birthing stories. During a couple of moments, I lost control and screamed because I was nervous about whether she was really moving down, or because I worried I was tearing. But for most of the waves, I didn’t feel scared and wasn’t yelling in pain – I just felt an immense need to loudly roar “Ahhhhhh!” as I let my body powerfully takeover and push with each wave, shifting my position a bit when my body compelled me to. The pushing track reminded me to keep my mouth open as I made these sounds, relaxing my throat.

When baby seemed like she was crowning, I started also pushing gently in between waves, trying to breathe her out at a controlled pace. I think this may have helped as I miraculously did not tear at all!! I had my Pushing Baby Out track (Hypnobabies special track for pushing) playing in my headphones – I knew I was supposed to play it out loud but was scared to break my concentration. They did ask me to take them off once the head was out and had warned me they may need to give me important instructions. When this happened, I ripped them off and asked Mike to play it out loud. The midwife and the nurses instructed me in a serious but calm way to turn over onto my side, which I did.

After another push or two that way, they told me they needed me on my back right away. I allowed myself to be maneuvered and they urged me to push with everything I had right now. I knew this was important and so I pushed as much as I possibly could, and my body helped me by pushing with me when I did. It took about 2 pushes and her body was born! (They explained to me after that her shoulders were stuck during this time – about 40 seconds. I knew this was a possibility and had trusted there was a reason they were directing me so urgently, but I appreciated their being so calm and confident that I did not feel at all anxious during this emergency.)

She was born at 4:11 am – apparently about 20 minutes after I reached 10 cm. Everything about her was perfect! The pediatric team did not really like her coloring, however, and so after 2 minutes of staying attached I agreed to cut the cord (and cut it myself!) so they could take her to the warmer and give her oxygen. She weighed in at 11 lbs. 4oz! I was at risk for hemorrhaging so the midwife gently but actively managed the birthing of the placenta and I was given Pitocin. All of that went very well which made my recovery feel so much easier than with my previous birth! Amelia was soon brought back to me and within minutes was nursing on my chest. 🙂 I felt elated and energized and proud, and it was a wonderful time of bonding for Mike and me with our newest little daughter!