We Fully Agree! What NOT To Say To a New Mother 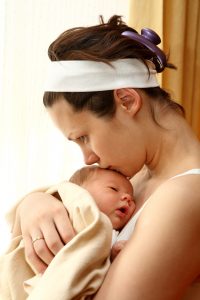 A recent article in the Huffington Post describes how new parents can be influenced by hospital staff to doubt their own parenting skills, right from the start. Fear of liability has created some unnecessary hospital admonitions and “rules” about newborn care which new parents actually have complete control over, just like all aspects of their pregnancies and births. Edicts, warnings and “advice” from staff and their sponsors such as formula companies can initiate confusion and undermine new parent’s confidence to trust in their own intelligence about their baby’s needs. Unnecessary interventions, including interference with breastfeeding and common newborn procedures can affect parent/baby bonding and baby’s long-term health:

What Not to Say to a New Mother — Hospital Staff
The other day I was visiting a family and their just-born baby in the hospital, and in the few short hours I was there, I heard a bunch of surprising comments:

•A nurse told a new dad (who was standing up, holding his 20-hour-old baby) to put the baby down in the bassinet, warning him that his son was safer in the bassinet — otherwise Dad might drop the baby.

•A different nurse told a new mom (who was holding her 8-hour-old baby) that her daughter would be safer in the bassinet because Mom might doze off and “co-sleeping is not allowed.”

These comments by two different staff members to two different families are, to me, eye-rollingly laughable — obviously babies can be safely held by parents, both seated and standing. Obviously babies don’t need to lie in a plastic bucket all the time for fear of being dropped.   Probably the first nurse meant: “If you did drop him, we’d end up with a law suit,” i.e., it’s potentially dangerous to us, the hospital, not: “It’s actually likely you’ll drop him”…
READ THE FULL ARTICLE HERE