The Magical Hypnobabies Birth of Simon

Thursday night shortly after putting our 4-year-old to bed, I was listening to the Come Out Baby hypnosis track (Hypnobabies track for encouraging baby to be born), after much deliberating on which track would be best at that time. I had been feeling like my birthing time (Hypnobabies word for labor) could begin at any moment for several days. Once I had done that, I came out to talk to my husband. I told him I just didn’t feel well. I did some stretches and called our doula, Nicole. She suggested taking a bath to relax and suggested ‘Maybe I will hear from you later?’ 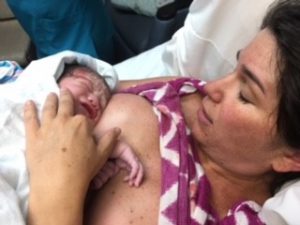 I got in the bath and my husband Bob had put out some candles and poured water on my back while I relaxed. We heard a ‘popping’ sound which turned out to be my water breaking. Bob went into prep mode immediately, getting the car loaded and things organized, calling for our son Henry to be picked up. Henry was taken to his friend’s house around 11:30 and we headed to the hospital. Our doula was ready to meet us there. The on-call midwife had not returned our call, but we knew it was time to go. I had been listening to Deepening, Fear Clearing, and Visualize Your Birth (Hypnobabies hypnosis tracks) before we left the house. In the car, I listened to Your Birthing Time Begins and my Easy First Stage hypnosis track. The pressure waves had been strong and growing stronger since 10:00.

When we arrived at the hospital it was approximately 12:30 am and I was stopping every few minutes while I experienced strong pressure waves. We were in the triage room for a while and Nicole arrived. The midwife, Lorie, checked me and I think I was 100% effaced and dilated 4cm. Nicole thought I was probably dilated more but that I was not relaxed and had a pressure wave coming on when I was checked. Lorie also confirmed that my water had broken. We then moved to the birthing room, with me experiencing strong waves as we walked from one side of the wing to the other.

I was most comfortable when I was standing, leaning over the bed with several pillows under me. Nicole reminded me to keep my legs apart as far as I could to make room for baby. Other positions I tried were: sitting on the toilet, side lying with the peanut ball (not my favorite as I needed counter pressure during waves and this wasn’t feasible in this position), and leaning over the back of the bed. Nicole and Bob read/said the Hypnobabies cues to me, like Relax (Hypnobabies cue to deepen hypnosis), Peace (Hypnobabies cue for instant physical comfort) and Release (Hypnobabies cue to instantly enter hypnosis) and helped to keep me focused. A few times in the process Nicole had to remind me to ‘keep it low’. I was much more vocal than I had expected to be, but I felt good being so vocal, so I just kept doing it! The low, open moaning sound resonated in my throat and felt good (though I was hoarse for a day and a half after!). During an uncomfortable moment, Robert reminded me that I could go to my Special Safe place with our baby and that was very sweet (a Hypnobabies cue).

I happened to see the clock at 3 am and I remember thinking- ‘How long has this been going on?’ and ‘I wonder when the baby will come?’ but not in a bad way- just in a curious way, and also in an I am getting excited to see this baby finally! kind of way. I had been listening to Birthing Day Affirmations on my headphones but pulled them off at some point and just wanted the Relaxation music playing out loud in the room. 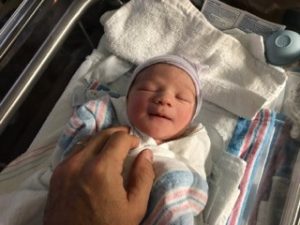 At about this time Lorie was becoming concerned as baby’s heart rate was dropping during pressure waves (Hypnobabies word for contraction). She let us know that she was going to ask the doctor to come in. Dr Marks came in and observed the situation as I continued to push. It was decided that she would use the vacuum to assist baby and me. Even with the arrival of the doctor and other additional people, the room stayed very calm and focused. After several pushes, I remember hearing Nicole say ‘Abby, you need to do this- NOW.’ I knew I had to give it all I had and bring my baby out into the world safely- I knew I did not want any additional medical interventions and I was determined to succeed.

When baby was crowning, I could hear the emotion in Bob’s voice and I knew that we would make it at that moment. Before I knew it- my baby was in my arms and I felt overcome with emotion. I was in total shock about what had just happened! It was an amazing, life-changing moment. Simon was born at 5:01 am 19.5” long, 7.4lbs and screaming.

After baby was born, he latched right away and nursed for about a half an hour while I birthed the placenta. I was given a shot of Pitocin for bleeding as well. We were moved down to the maternity wing about 2 hours later and went home 32 hours after baby’s birth.

We were so excited to go home and introduce Simon to his big brother Henry and enjoy some family bonding. I cannot imagine not having done the Hynobabies course, nor can I imagine not having had Nicole as our Hypnobabies doula. It was a joyful experience.