“Around 4:30 am, I finally started cluing into what was going on, so sat on my birth ball, and listened to “My Birthing Time Begins” (Hypnobabies reminder of all the tools and techniques). I started timing and waves (Hypnobabies word for contracti0n) were consistently 45-60 seconds, between 2-4 minutes apart! What?!?!”

Long version: I know a LOT about babies. My entire upbringing and adult life have been mostly consumed with babies or children (everyone else’s!), I’m an avid researcher, and I love evidence-based stuff. So, when finding a new birth center in my city, and then seeing a sign for Hypnobabies being offered as a class, I knew it was exactly what I wanted for my first pregnancy! 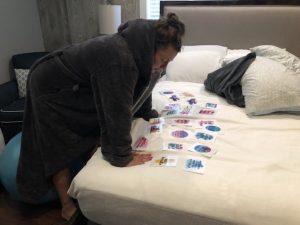 Liz, the course instructor, was pregnant at the time and would not be holding classes closer to my guess date, and so in order to do the in-class course, we began at 22 weeks. For those of you worried about starting too soon, I want to quell your concerns. Not only did I love having Hypnobabies as a backup for any negativity throughout my pregnancy, but, can’t sleep? Hypnobabies! Angry or emotional? Hypnobabies! Need a pick me up? Hypnobabies! In the tub and need background noise? Hypnobabies! It just works for so many things, and I loved having all of the information from class in my hands early so that I could really take my time researching and understanding our preferences. My husband is BRAND NEW (like never held a baby, new!) at all this, so although a bit overwhelming, he enjoyed having time to wade through it as well.

I knew that because I felt so amazing during my entire pregnancy and confident with myself, that there was a chance that I would just go from being totally not in birthing time (Hypnobabies word for labor) to straight up BAM birthing time. Welp, that is exactly how it happened. 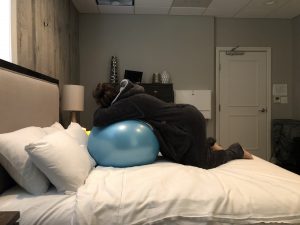 During the night at 40+2, I was having some broken sleep and couldn’t get comfortable in bed, so what did I do? Hypnobabies! I just kept doing a track, going into hypnosis/sleep, waking up at the count up, and putting a new one on. 😂 Looking back, I’m so glad because I really would end up needing that night of sleep, without knowing it! Around 4:30 am, I finally started cluing into what was going on, so sat on my birth ball, and listened to “My Birthing Time Begins”. I started timing and waves were consistently 45-60 seconds, between 2-4 minutes apart! What?!?!

My husband woke at 5:45 am and knowing we would have to contend with rush hour traffic, and the fact that I was quickly heading to 3-1-1, we decided to go to the birth center early, but walk and have my early birthing time there. There was a gorgeous orange sunrise on the way there, too! I consented to a cervical check at around 11 am, and with Hypnobabies in my ear, and relaxing my pelvic floor with my finger drop, it was super comfortable, and not an issue at all. I was really surprised by how little sensation I felt! ((I did not find out then, but I now know I was 4 cm dilated.)) 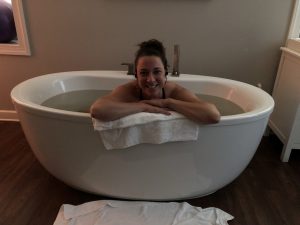 We were given a birthing suite, and the midwife came in every hour to check on us as there was another mother further along in her birthing time. Time was very, very distorted for me, but around 5 pm, and still having consistent waves every minute or so (for 12 hours now), sometimes back to back, they offered another check but left it up to me. Other than getting in and out of the position for the check, it was again, totally not a big deal. Again, did not find out numbers, but after consistent waves for 6 more hours, I was now at 5cm (which would have crushed me if I had known!).

Around 7:30 pm, my sister got there, giving my husband a much needed and well-deserved break. At this point, I was so deeply in hypnosis that I was not aware of the room around me. I could have been in the tub for 5 minutes or 5 hours. I would open my eyes and be surprised by people or changes to the room. I could hear the room, but was clearly not mentally present, though was still involved in conversations when I wanted to be. That is so cool to me!

Around 11 pm, we put on “Pushing Baby Out” (Hypnobabies special track for pushing) out loud and I was chatting with Kerry in between waves and making jokes, which was 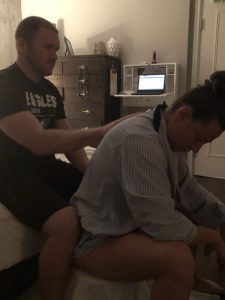 making the whole room laugh. At this point, I was very, very ready to not hear Kerry’s voice anymore – it had been almost 24 straight hours for me! My baby had been so wonderfully compact in my pelvis for so long, and I have a really muscular, compact frame with strong legs that he wasn’t descending properly, so we did some coached, but still mother-directed pushing. It was really helpful in focusing my mind, but I still felt empowered to ignore any requests if I felt like they weren’t right for me.

After multiple changes in position and finding out he was a bit stuck behind my pubic bone, he finnnnnallllly decided to join us at 2:11 am. So, basically 24 hours of very consistently close pressure waves. Without Hypnobabies, I know without a doubt that I would have lost faith in myself, my body and all the negative feelings would have started creeping in. But because I had months of affirmations and practice built in, it never occurred to me (not ONCE) that I might fail or need interventions or anything of the sort. The midwife and my sister commented how most women are so exhausted by pressure waves within just a few hours, but here I was 20 hours in, and making jokes! 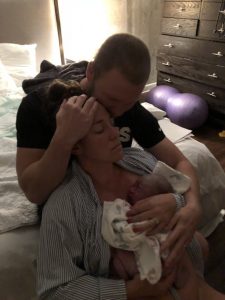 Hypnobabies worked to reframe my mind to what it needed to be for childbirth. I didn’t grow up in a village surrounded by peaceful birthing mothers and aunts, and literally never even saw a breastfeeding mother until well after college. Hypnobabies was able to give me the framework I missed out on. It gave me a plan of action, and then a backup plan for that plan. It gave me an ally. It gave me tools. It gave me a wealth of support, and at the same time, empowered me to do something no one could do for me. And overwhelmingly the best part about Hypnobabies, it ends with the best prize ever, a sweet little squish!!🧡 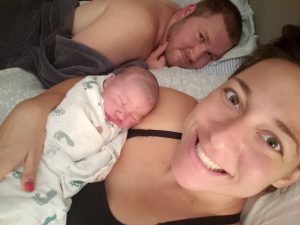