“I imagined myself getting there not too early but not too late. They listened to me right away when I said I don’t need to be triaged I know the baby is coming soon, and they put me in a room. They asked to check me, and I agreed, and I was surprised they asked me if I’d like to know my dilation and I also said yes. They said 7cm.”

I had a hypno-baby yesterday and everything went exactly how I had visualized it! 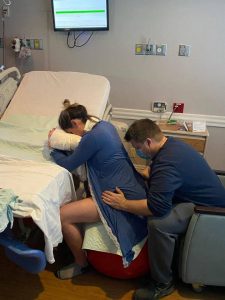 I had been having waves on and off for 5 weeks. I had planned on my son coming early around 38 weeks as that was when my other two sons were born. Well, that day came and went…and then three more weeks passed! I was so surprised and getting a bit confused and discouraged but my tracks kept me positive that all was well. I was relying on them a lot during the last weeks of my pregnancy.

My midwives suggested a gentle induction for Monday 41 +4 weeks, and I had agreed to it hoping so much he would come before that day. Well yesterday (three days before induction day) I was having waves (Hypnobabies term for contractions). I didn’t think it was birthing time (Hypnobabies term for labor) since they weren’t getting stronger. I was in the middle of googling “scar tissue on cervix” (I had a Leep in the past and my midwives suggested this could have been a reason for my start stop pattern of waves) when I felt a big POP, I jumped it was so intense and right after that my waves intensified by a ton. The theory is that the scar tissue released itself in that moment. 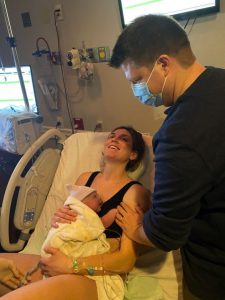 I called my doula and babysitter and had them come over. My doula said it was up to me if I wanted to leave for the hospital, and I did. I imagined myself getting there not too early but not too late. They listened to me right away when I said I don’t need to be triaged I know the baby is coming soon, and they put me in a room. They asked to check me, and I agreed, and I was surprised they asked me if I’d like to know my dilation and I also said yes. They said 7cm. That was perfect timing for me. I put on my tracks in my headphones and sat on the birthing ball. My doula did hip compressions and my husband held my hand.

A few hours passed and I asked to be checked because I was feeling like I could be getting closer to pushing. She said I was almost complete with one little lip. She gave me an option to break my waters or leave it be. I chose to leave it be in the moment but after a few more intense waves I felt energized and was ready to get the baby out. I said to break my water which they did and after 20 minutes of pushing on my hands and knees I pushed him out. The whole staff at the hospital was incredible and I essentially had no interventions besides ones that I had requested (water breaking and Pitocin for third stage) I was also shocked to find out he was 9lbs 6oz. We got to spend the full golden hour together without interruptions. I used my cues instead of my tracks during transformation and pushing. It was an amazing experience I am so thankful!