“I felt the waves and stopped and leaned on my husband for them. But they were manageable. I just listened to my Easy First Stage and breathed through them. Even when I was having double waves, they were easy to get through.” 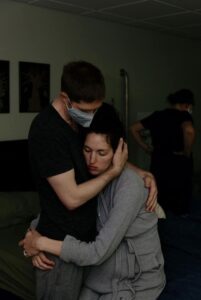 My 23-month-old had been sick for 3 weeks (rotavirus, cold, rotavirus again). My husband and I caught his cold and were sick for almost a week (right up until Tuesday evening for me). No one had slept for the better part of a month because my son is highly emotional when he’s sick and wakes up nonstop. Also, it’s hard to sleep when you can’t breathe when you lie down. The night before the birth I was feeling a lot better, minus being super congested and barely being able to hear out of my ears they were so plugged.

My guess date (Hypnobabies term for due date) was 5/5 and I loved the sound of a Cinco de Mayo baby, so I had been telling her all along if she felt like making her debut that day, it would be fine by me! 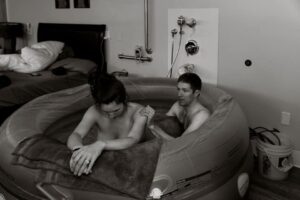 Sure enough at 10 pm on 5/4 I told my husband I thought my practice waves were coming closer together. They had been very mild and sporadic for the last two weeks. By 11 I was feeling more confident that the time was now, so I decided to put on my Birthing Day Affirmations and try to get some rest. I woke up at 1 and the waves (Hypnobabies term for contractions) were still light, and I decided to shower because it had been a hot second since the last one. I listened to affirmations again. My husband got all of the meals ready for that day for my 23-month-old. Grandpa would be watching him, which was brand new for everyone. We had just moved from Michigan to North Carolina the month before and didn’t know anyone. So, I was a little stressed about leaving him, but the hypnosis tracks really helped relax me and made me feel confident that everything would go well. After getting everything prepped and all our stuff in the car, we laid back down around 4 am until our son woke up at 6:30. I listened to Easy First Stage (Hypnobabies main birthing day track) while I slept, and only woke up a handful of times. I kept listening to the tracks as we told my son goodbye and on the way to the birth center. Prior to getting in the car, waves were about 5-7 mins apart and getting stronger. The 40 min drive was a little worrisome, but a Fear Clearing track (Hypnobabies track to release fear) a few days prior helped with that. My waves all but stopped on the ride. I had two very mild waves. We checked in to the birth center at 8 am. From 8 am-3 pm it was a lot of hanging out in the birth tub and using nipple stimulation to bring on stronger waves that were closer together. They would pick up (1-2 mins apart) and slow right back down (8 mins apart). So, I decided to get out of the tub and go for a walk outside and do some squats. 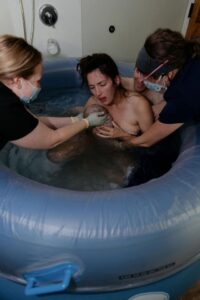 About 3 mins into the walk, the waves came steadily at 1-2 mins apart. At this point the midwife (who was the only midwife at the clinic I had not yet met) was telling me they were going to need to send me home because I wasn’t in my active birthing time. My husband and I told her that I was, and she said she would give me 30 more mins to see if things changed. So far, my birthing time (Hypnobabies term for labor) had been wonderful. I felt the waves and stopped and leaned on my husband for them. But they were manageable. I just listened to my Easy First Stage and breathed through them. Even when I was having double waves, they were easy to get through. So, I was rather upset with the midwife who had supposedly worked with hypno-moms before for telling me that because I wasn’t in extreme discomfort, I was still very early in my birthing time. I told my husband I really needed some protein and wanted to sneak it in quick because I felt I was running out of time to eat before the baby arrived and I needed the energy. To which my midwife responded, “you’re just going to puke it up anyways”. I proceeded to eat my wonderful grass-fed burger in front of her. It was just what I needed. 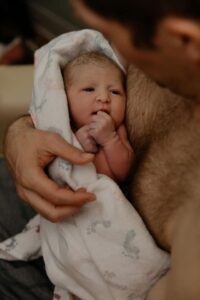 I climbed in the tub 5 mins after eating and told them I felt the urge to push (even though they said I was only 7cm and 90% effaced). The sweet midwife in training said to follow my instincts. So, I put on the “Pushing Baby Out” track (Hypnobabies track for pushing) on the speaker. This is where I wish I had disregarded that and left my headphone in. Between the two midwives, nurse, birth photographer and my husband I felt I couldn’t hear the track. My pushing waves were coming very quickly. Every 90s or so. And they got ahead of me, and I lost my steady hypnosis I had been carrying all day. There was too much talking, and my husband couldn’t seem to get everyone quiet. He has been my rock and biggest advocate all day, but we both were a little overwhelmed at this point. The pushing stage was uncomfortable for me, but also very satisfying. I knew exactly where my baby girl was at all times. Only 30 mins after the midwife was trying to send us home baby girl was born with 15 mins of pushing. Holding her in my arms was the sweetest thing!! We will absolutely use Hypnobabies again if we have a third child. It was night and day different from my first birth without it! Thank you all for the amazing stories and support along the way! 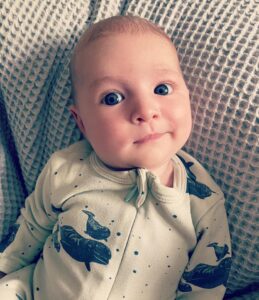