“One last push and he was all the way out and in my hands. I pulled him out of the water with midwife’s help as my arms were all jiggly, and my husband exclaimed “it’s a boy!!” And I could hear the joy in his voice!! It was sooo cool!!“ 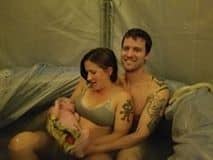 I was 41 weeks and 4 days, it was a Sunday and we were ready to meet this baby!! My midwife came for an appointment around 1 and we decided to do a cervical massage to hopefully get things going. She said I was a dilated to a 4 and mostly effaced and went to a 5 when during a birthing wave. So that was good news, we were going somewhere! While she was here we checked the hose set up for the tub and talked some things out for birth prep. She said there was a great chance of things getting going in a few hours so to walk and squat any time I felt a something. So we did that, I felt comfortable waves on and off, they just felt like Tightening, and squatted each time. Then we all napped which was nice and I listened to my Come Out Baby Hypnobabies track.

There was more waves where I needed to use my hypnobabies practices. So Chad and I went home so I could listen to another Hypnobabies track to try and get focused and I was hoping to time the waves at this point since my midwife asked. Chad decided to start filling up the tub with air and to get that ready, soooo glad he didn’t wait any longer. After about 15 minutes of my Hypnobabies track Easy First Stage, I was like holy crap I should have told my midwife to come sooner(she had an hour drive) things are really picking up. I text her that I was humming during each wave and kept getting body shakes. It was about 9:30 at this point. My father in law was bringing hot water in a big Gatorade jug over to fill the pool from their camper, Chad was boiling water in our house and filling the pool with hot water whenever ours kicked back on. 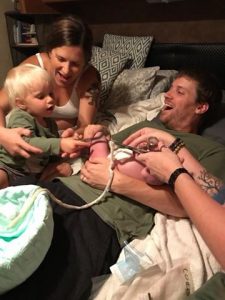 I needed Chad more this time, I called to him multiple times, “Help me Chad” I just wanted him near me. He put his hand on my shoulder (the Relax Cue) and that helped me relax so much. It seemed my light switch wasn’t working anymore because waves were coming so frequently, so him doing something different really helped me refocus. I told Chad “I need water” and he brought me a water bottle and I said no, “I want to BE in water”. He thought there was almost enough water in the tub so we started that way. I wanted to sit on the toilet a bit, because I felt like pooping. But I knew what that meant. At this point Chad put Becky on speaker phone as she was still driving this way.

Every time I stood up to move outside to the tub I would get another wave, but we were able to get outside and there was enough water for me to relax some. The water felt amazing and I was so happy to have it. Becky and her birth assistant Annie got there a few minutes later, around 10:00 pm. Each wave having that counter pressure on my back was so helpful. I wanted my husband to get in the water with me, and after a few pushes his head was out, still en caul!! I pushed a few more times and most his body was out, around his tummy coming out is when the sac finally broke. One last push and he was all the way out and in my hands. I pulled him out of the water with midwife’s help as my arms were all jiggly, and my husband exclaimed “it’s a boy!!” 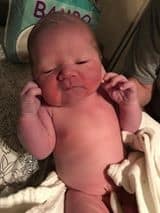 And I could hear the joy in his voice!! It was soo cool!! So after about 1 hour and 45 minutes of active birthing we had our son! Exactly the birth I had visualized, as short as possible, yet my midwife could make it, and I’ve always hoped to birth a baby en caul!! We couldn’t have been happier.
When my son came over to meet his baby brother he was sooo sweet, he walked up to the tub and said “Hi” real perky like and waved to him. He looked over the edge of the pool at us with such amazement, it was precious.