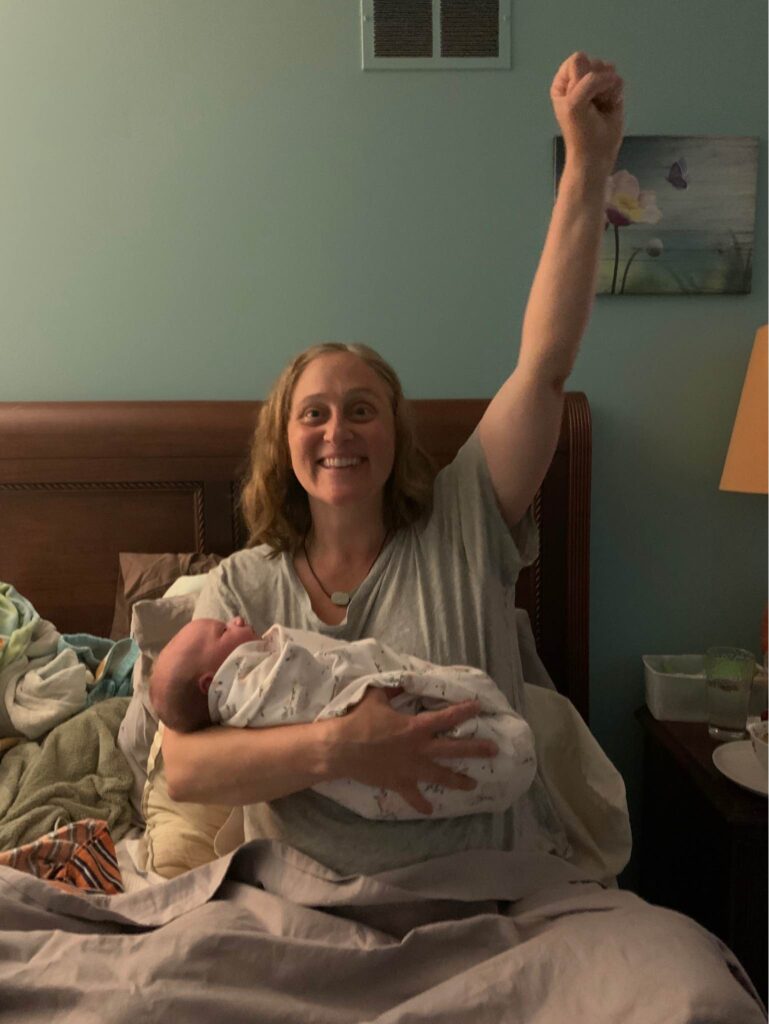 It was early in the COVID pandemic, and I didn’t want to go to the hospital. Lucky for me, my midwife also attends births at home, and she was on board with switching plans. I was 42 and this would be my second Hypnobabies VBAC, but she was fine with it, especially given the pandemic.

“It seemed like transformation (Hypnobabies term for transition) to me, and I was excited about the progress. When I needed hypno-anesthesia, I imagined the burning red-orange summer sunset and felt powerful.”

I’d had a few hours of waves (Hypnobabies term for contractions) on two separate nights the previous week. And then my water seemed to be leaking starting late Monday night. Tuesday, I called my midwife, and we weren’t really sure, so I relaxed and took a swim in my neighbor’s pool with my boys, 8 and 4. I had a few waves that day, but nothing consistent. That’s how it’s been for all of my births—water leaking here and there but no waves. Both other times I went to the hospital for Pitocin, but this time I wanted to be different. 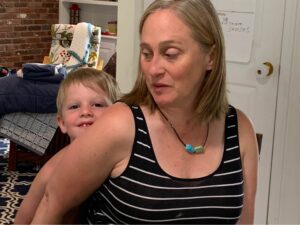 Tuesday night still no waves, so I decided to do castor oil floats in the morning. I set an alarm for dawn, got up and ate as big a breakfast as I could and spent some time alone downstairs. It was exquisitely peaceful, raining lightly, and for a while I just watched the woods behind my house and connected with nature and with the present. I went back to sleep and woke up later in the morning.

I felt restless and nervous, so I talked with my doula, Karen. (We met years before when I was in her Hypnobabies class, stayed in touch, and became friends. It was an easy decision to choose her as my doula for this pregnancy!) We decided that no matter what happened, I would take the castor oil and I would get in the birth pool. If I did those two things, I’d be satisfied even if I had a change of plans.

The night before I’d connected with my friend and fellow Hypnomama/expert, Jamie. She gave me a pep talk and we went over the castor oil plan. I felt ready.

My husband, Dennis, made me a root beer float with 2 oz of castor oil at 10:30 a.m. and again at 12:30 p.m. I had been watching my carbs and monitoring my blood sugar, so the floats were delicious even with castor oil in them! Karen came over at 3:30 p.m. and offered me soup. It looked so good, but I couldn’t eat it. Minutes later, the castor oil’s laxative effect started… along with powerful birthing waves! They were about 2-4 minutes apart and 30-60 seconds long right from the start. 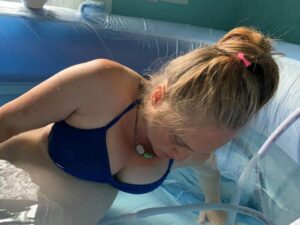 I went from nervous to peacefully excited and encouraged. During the waves, I felt like doing some lunges with one foot on a bench, then some squats…and did some abdominal lift and tucks with Dennis in the kitchen. It was amazing to be at home and do the things that came naturally—without IVs and monitors and a bunch of strangers around. At 4:30 I wanted to go upstairs to be free of distractions.

Karen suggested I rest in bed and start my tracks, so I did that but didn’t like lying down at all. And to my surprise, I didn’t like the tracks! Kerry was talking about the different stages of birth, and it wasn’t syncing up with what was happening at that moment. For some reason that bothered me. But when Karen put on the background music, it was just what I needed. Instantly I flowed right into a deeper hypnosis and my mind played the parts of the tracks that I needed to hear. Never would have expected that! 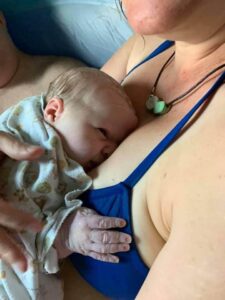 For an hour or so, I walked around slowly and got into whatever position I felt like as Dennis and Karen were busy near me getting the final parts of the room ready. We did more abdominal lift and tucks. The waves were more intense than I was expecting, probably because there wasn’t really any early birthing time (Hypnobabies term for labor). Dennis taped some affirmations to the wall I made earlier with our younger son, Kyle.

At 5:30 or so I said I needed to be in the birth pool. I feel like Karen wasn’t quite sure if it was the right time, but I was sure that was what I needed. The pool was calling to me! So, they filled it up for me and I noticed the waves feeling closer and stronger. When the pool was half full, I hopped in and let it fill up around me. I felt like being on my hands and knees on one knee and one foot. I loved everything about the water.

Waves started feeling different and more intense. During one I stood bolt upright in the water. I remember feeling a little agitated at one point and Karen helped me to go to my Special Safe Place. For my first Hypnobabies birth, I didn’t use my Special Safe Place really, but that day it was like I was transported there. I felt safe and in control in my special place. In my mind, I touched the willow branches and stood in the shade. And I let the water of a stream wash over me when I felt hot.

I was at peace with the intensity and was so emotionally comfortable. I started gazing out my bedroom window at the sunny yard and felt like I was part of it all, acting out the perfection of nature. I was filled with clarity and awe. I could hear my sons and their friends playing outside from the window. I felt centered and peaceful.

Then I started noticing that waves’ peaks were vibrating or jiggling. It seemed like transformation (Hypnobabies term for transition) to me, and I was excited about the progress. When I needed hypno-anesthesia, I imagined the burning red-orange summer sunset and felt powerful. 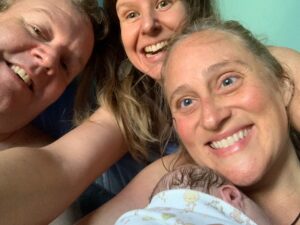 Minutes later I had two big waves back to back. As the second wave ended, I felt an automatic and amazing wave of euphoria wash over me. My body and instincts seemed to know and signal that transformation was over. I basked in that wonderful feeling. The waves were different after that—gentler, like a hug. I just stayed in the pool and waited for the midwives, who were almost to my house. 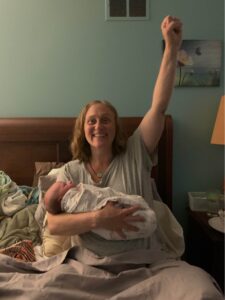 I felt a little bit of pressure and it seemed like the waves were guiding the baby down little by little. I just let them happen and didn’t try to push. Karen put on Pushing Baby Out on my phone and I listened to it and followed the instructions. That track was perfect. We all started to feel like the baby would be born soon and Dennis joined me in the pool. Karen asked if I could feel her head, so I did my own cervical check and felt her head. The power of the next wave was gathering around me and I knew I couldn’t and shouldn’t resist it, so when it came I just let my body push. The baby came all the way from my cervix to crowning! The wave stopped so I relaxed, but I felt the next wave gathering around me. I was a bit nervous but also curious what it would be like to feel the baby coming out—this was my first unmedicated birth. I decided not to worry about it and let the wave happen. It pushed the baby’s head then body right out into the water. Dennis and I scooped her up and we all cheered! Our other kids and my mom ran upstairs and met the new baby.

Our little lady, Katie Leah, was born at 7:36 p.m., weighing in at 7lbs 2oz, at 40 weeks +1, after a 4-hour birthing time. The midwives got there right after she was born and helped me birth the placenta, get a shower, and eat that soup that I couldn’t stomach that afternoon. I had minimal bleeding and no tearing. Karen brought champagne and we all had a toast. I had the perfect birth team and partner. The whole experience was more than I hoped for.