Midwife congratulates new mom, “You wanted to do it your way and you did it.” 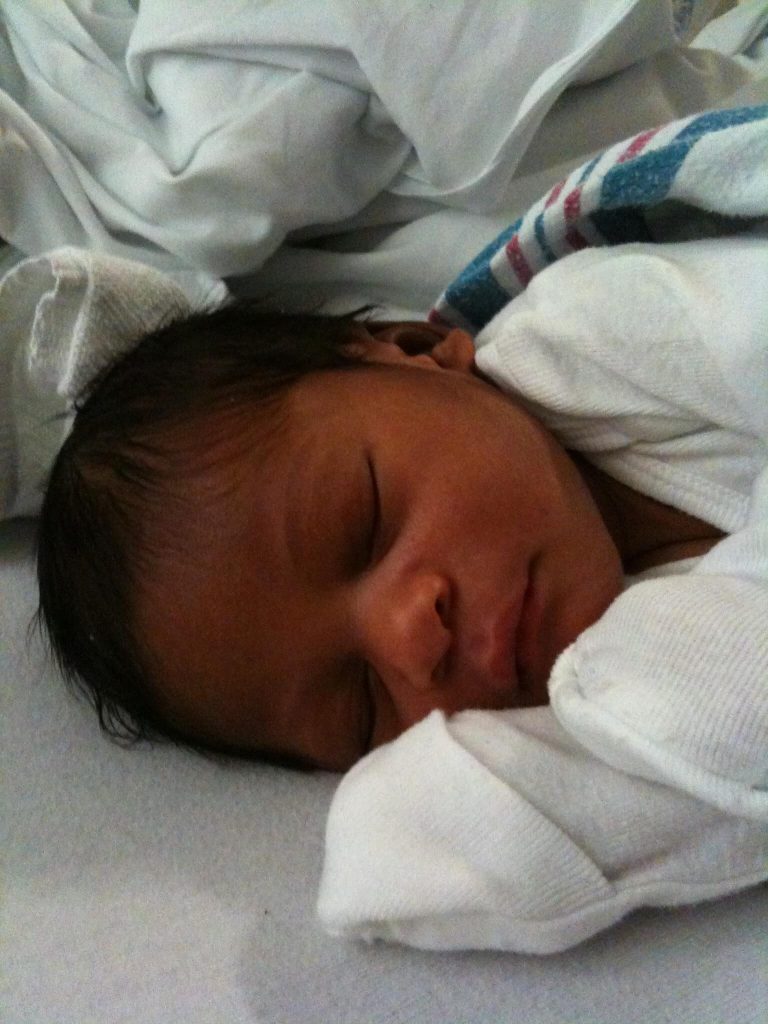 Zuriel means “God is my rock” in Hebrew.  We call him Zuri for short, which means “Beautiful” in Swahili.

The calm before the storm

I had been having practice pressure waves on Sunday, January 23 and Monday, January 24.  They were close together and very frequent.  We (husband, mom and I) believed that our little sweet pea would be coming soon.  I timed the pressure waves and they weren’t consistent.  By Monday afternoon, everything stopped.  The rest of the week I felt no practice pressure waves and I became concerned that sweet pea was not going to come out.  He was getting heavier and deeper into my pelvis and I started to feel uncomfortable.

Is this the real thing?

Thursday, January 27 there was nothing new to report.  Sweet pea was comfortably resting in my pelvis like he was not interested in coming anytime soon.  My day was normal and I felt no different.  I spoke to sweet pea that morning and said “Will you come out?  We all want to meet you.  We’ve been waiting for you.”  Well, like a good son, he was listening.  That evening I was preparing for bed and I felt a lot of pressure in my pelvis.  Just thought I was tired and had been on my feet all day carrying the little load.  My husband looked at me and asked if I were okay and I said that I just felt some pressure.

About 30 minutes later, I felt as if I were having menstrual cramps.  This was different from what I had been feeling earlier in the week.  I heard that pressure waves could feel like this, so I began to time the waves and turn off my switch with each wave.

The waves were about four minutes apart for about 45 minutes, so I decided to call my midwife.  In the meantime, I asked experienced Hypnomoms about what their waves felt like and folks were kind enough to respond as I was waiting to hear back from the midwife.  My midwife finally called and apologized for the delay (she was just attending another birth).  She told me that I could come into the hospital to get checked out and if I am not five centimeters, I would have to go home.  I really didn’t want to waste my time (or anyone else’s for that matter), but my husband said we’d better go.  I began to squat with each wave, which was a new behavior and we thought this could be it.  Since I was under hypnosis, I could have been closer to birth than I could tell  . . . we were right. (Later during the birth, my midwife told my husband that she didn’t think it was my birthing time when I called her because I was so calm :o)

I listened to the Easy First Stage track on my headphones and boy, it was a bumpy ride.  It snowed the night before and there was leftover snow bumps filling the notorious potholes in Philadelphia.  My husband apologized and slowed down.  I was still turning off my switch with each wave and felt comfortable.

We arrived at the hospital at midnight.  The guard came out with a wheelchair and I declined using it.  I told the guard that I wasn’t sick.  I stopped by the restroom before heading upstairs to evaluation.  At this point, I would squat and do the finger drop with each wave, then turn back on, stand up and continue walking.  I got to the evaluation unit and the nurse began to ask me questions.  Can you believe she asked me, “On a scale of 1 to 10, what is your pain level?”  I was squatting the moment she asked me this; I turned and looked at my mom with a very confused look and responded, “I don’t know, I’m under hypnosis.”  I said that it was a seven based on intensity.  (editors note – this mom did great changing the question in her mind to intensity and responding that way.)

They hooked me up to the fetal monitor and my pressure waves came closer and stronger; I kept my headphones on and listed to the Easy First Stage track.  After 20 minutes, the midwife came to check me and said that I was six centimeters.   I tested positive for Group B Strep, so they inserted a heplock with antibiotics and helped me to the birthing suite.

Time to birth my son!

This is where things get fuzzy.  Although my birth only took four hours (arrival at hospital to birth at 4:17 a.m.), it really felt as if only one hour had passed.  The birthing suite was cozy.  It had a sitting area and a shower.   I asked my husband to set the Easy First Stage on repeat on a portable CD player and I continued to do the finger drop technique on a birthing ball.  Time seemed to stand still and I felt like things were progressing quickly.

**BOP – As the waves became more intense, I felt like the wind was being knocked out of me.  I am asthmatic (it’s controlled – just use an inhaler before running/exercise), so I am not sure if that had anything to do with it.  This feeling of not being able to breathe during the very intense waves caused me to lose focus (that, along with doppler interruptions and a heplock that took longer than it was supposed to).  I took one puff of my inhaler, but I still felt breathless with each wave as I approached transformation. **

Things got more intense and I felt like I was losing it, although everyone else in the room was amazed by how calm I was.  I don’t think I was the perfect example of a Hypnobabies student, but I tend to be hard on myself.

I studied the belly lift and I planned to use it and do AAHHH pushing.  I finally got to the point where I said that I was ready to birth my baby, so I begun doing the belly lift, which made things progress even faster.  I started to grunt with each wave.  A loud, guttural grunt came from deep within me as I was experiencing involuntary pushing.  This was so unexpected, but it felt so right.  By this time I was also completely butt naked, which was also unexpected because I am very conservative.  It just felt right.

My midwife said I was 8.5 centimeters and suggested I sit on a birthing stool for a while.  I told my husband to put on the Pushing Baby Out CD.  I grunted long and hard with each wave, all the while lifting my belly to give my son a better line of sight.  I told my midwife that I didn’t think he was coming out and she said, “Yes, he is.  He’s right there.  Go ahead and feel his head.”  I was so surprised to find that his head was in my birth canal coming close to crowning.  She then suggested I get on all fours in the bed, so I can be more comfortable and she can catch my son.

I did so and she placed a birthing ball in front of me and I squeezed it with each wave.   I decided to dig deeper, so I held on to the bed rails and grunted and pushed.  I felt my son’s head crown and I slowed for a moment to make sure that I was being too vigorous in my pushing—I didn’t want to tear.  I felt good and my midwife said “It’s okay. Don’t be afraid.”  At this time I heard the voice on the CD say “Open . . .” and I said out loud “Open” and pushed my son out.  The crowning of his head and pushing him out did not cause me any discomfort.  I felt just pressure and stretching.  Zuri came out with arms stretched; hands open, screaming with an enraged look on his face.  A first mental picture of him that I’ll never forget!

After examining me and ensuring that I birthed the placenta, the midwife congratulated me and said, “You wanted to do it your way and you did it.”  She must have read my birth plan.  Nice to know they actually read those things.  She hugged me and my family before moving on to her next birth.

Afterward I had a surge of energy that lasted through that Sunday.  I was riding on oxytocin and adrenaline until the body aches came on Sunday.  As a runner, I am very familiar with the runner’s high and the muscle soreness that follows.  It happens with every endurance sport—why would natural birth be any different?  I felt—and still feel—great.

One nurse who came in to cover for the wonderful nurse that assisted my birth, looked shell shocked.  She stayed at my birth even when the other nurse returned.  She stared at me in disbelief, or maybe it was confusion.  It was as if she’d never seen a woman, butt naked and grunting, who remained calm during an unmedicated birth.

I brought a bag full of snacks, oil for perineal massage, etc and never used anything.  I don’t regret the preparation, just noting how things progressed so quickly that I didn’t have an opportunity to use anything.

This birth exceeded my expectations because of Hypnobabies, along with exercise, diet, red raspberry tea, perineal massages, and the belly lift.

Thanks to LaRonda from the Hypnobabies Yahoo Group for sharing her birth story with us!