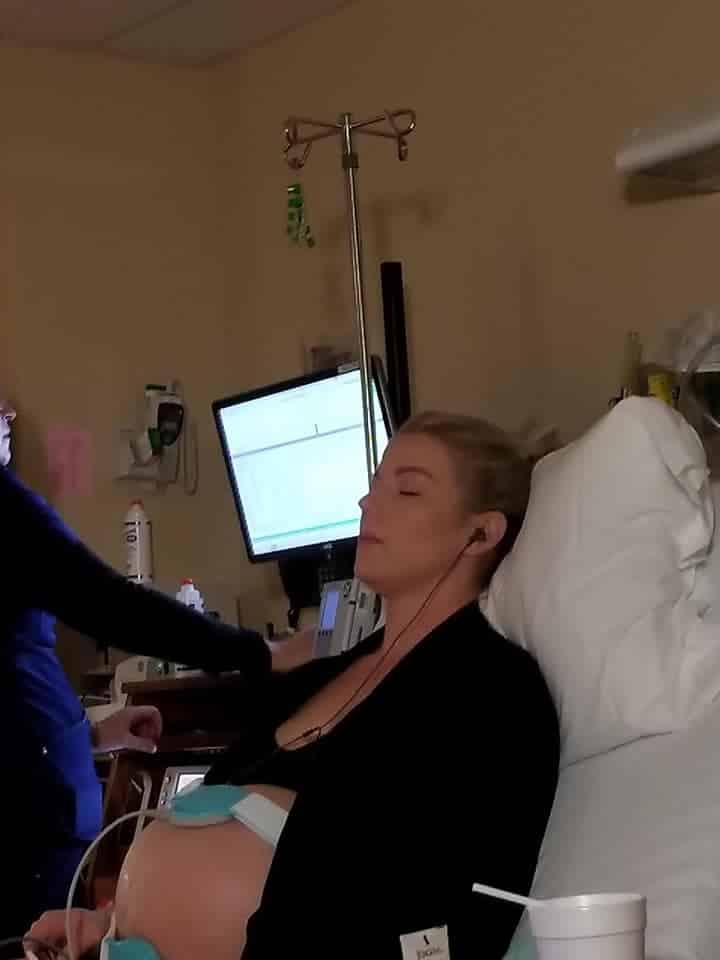 “When we arrived at the hospital, I was checked and told I was dilated to a 6. About an hour later I was checked into my room and they started to fill the tub before me, so I could try to sit in there for a while. Waves (Hypnobabies word for contractions) felt so good in the tub, and my husband read Hypnobabies hypnosis scripts to me while I was in there.”

My guess date (due date) was January 22nd, however I always had this gut feeling that I would go beyond my guess date. When listening to the Visualize Your Birth Track (Hypnobabies hypnosis track), I would envision my birthing time (labor) starting on Tuesday, the 23rd. 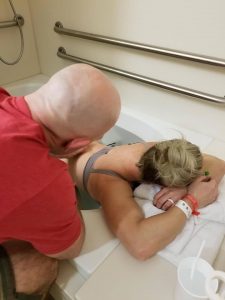 Low and behold, the night of the 23rd, at 11:30 pm, I started experiencing pressure waves (Hypnobabies word for contractions). I had regular Braxton Hicks waves for the last several months of my pregnancy, and I knew instantly that these felt completely different. They actually started coming at pretty frequent intervals right off the bat, which was surprising to me. I would have them about every 10 minutes or so from the get-go. I also started having some bloody show shortly after the waves started. After several hours of that, the waves actually died off quite a bit, and I would only have maybe two per hour for a few hours through the night.

When I woke up in the morning, the waves (contractions) started coming at more frequent and regular intervals once again. I was pretty sure that was going to be the day. I already had an appointment scheduled with my midwife that day at 11 am, so I decided to just head into that appointment and let her check me to see how dilated I was. That was actually my first cervical check throughout my entire pregnancy. That is one thing I really liked about the clinic I went to, they didn’t ever force checks on me, but at this point I wanted one to see how far dilated I was.

By 11 am. when I got to my doctor/midwife’s office, the waves were a little more intense, but still completely manageable. I had been listening to my Birthing Day Affirmations track (Hypnobabies positive affirmations about birth) off and on throughout the morning, and also on the way to my appointment as my husband drove us. 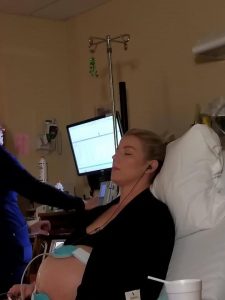 Once at the appointment, my midwife checked me and said I was already dilated to a 4. This was encouraging to me, given I was completely comfortable with the waves I had been having so far. She said I would definitely be giving birth that day, and told me she would even call the hospital in a few hours to see if I was there (she wasn’t on call that day). She did encourage me to stay home as long as I could before coming into the hospital, to allow my birthing time (labor) to be as comfortable as possible while a home.

Once we got back home, I tried to lay down and nap while continuing to listen to my hypnosis tracks, but waves suddenly starting to pick up in intensity and frequency. I decided since we were a 45-minute drive from the hospital, and traffic that time of day in our area tends to be pretty bad, I wanted us to go ahead and leave for the hospital.

When we arrived at the hospital, I was checked and told I was dilated to a 6. About an hour later I was checked into my room and they started to fill the tub before me so I could try to sit in there for a while. Waves (contractions) felt so good in the tub, and my husband read (Hypnobabies hypnosis) scripts to me while I was in there, however even being in the tub for only 40 minutes, my waves slowed tremendously so I decided to go ahead and get back out. 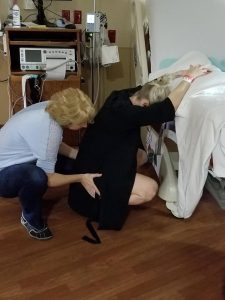 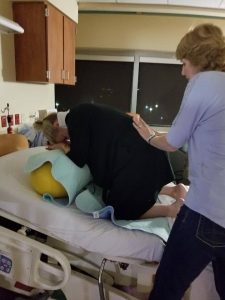 For the next few hours I started getting a little frustrated, feeling that things weren’t progressing very quickly, then suddenly, around 9 pm, waves started getting much more intense, happening very frequently, and I started feeling nauseous. At this point I was moaning through the waves, not out of pain, but just because it felt good to vocalize through them. It also felt good to have my husband and my doula apply counter pressure to my lower back since by this time I was feeling quite a bit of pressure in my lower back with waves.

I had to really focus and zone out with every pressure wave now, they were that intense. The Midwife came in to check me and said I was dilated to a 9.5. This was incredibly encouraging to me. However while she was checking me she “accidentally” broke my water. Things immediately got 100x more intense after that, and I had reached the point where I didn’t think I could do it anymore.

I’m not sure how much time had passed in between my water breaking and me getting to the point where I could start pushing, because everything was just a blur for me at that point. I had always hoped that when it was time for me to start pushing, I would be able to let my body do it on its own. At first, that is what happened. I was on all fours on the bed, and my body just started pushing on its own. It was the most intense feeling. 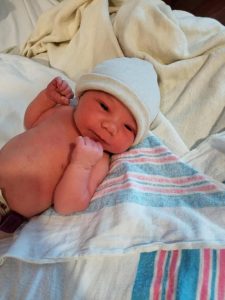 I liked the feeling of being on all fours while letting my body push, however the baby’s heart rate was dropping so they made me keep switching positions to try to get his heart rate back up, this is when things got really tough for me, because I was having the most intense waves, the feeling of needing to push, but at the same time was having to move positions on the bed. I had a really hard time with that. They also had an oxygen mask on me to try to help get his heart rate back up.

Finally, they had me stay on my right side, which was not the most comfortable pushing position for me by any means, but at that point I was just ready to try and push him out. I waited until my waves came and I felt the urge to push, then I would push with the wave. 3 big pushes and he was out!

This was the most intense, but amazing experience ever. We did it!

While the end was very intense (the point after my water broke up until the time he was born), I am happy to say that everything up until the point of transformation (Hypnobabies word for transition) was manageable for me. 24 hours of birthing time, and only the last 1-2 hours were difficult.

Thank you, Hypnobabies, for helping me to have the natural birth I had always hoped for! <3