“The nurse checked me, and I went from a 2-7 in one hour, but I was so focused, I didn’t show my excitement, as I was convinced this still wasn’t time, and something would stall my progress. I went to the bathroom to pee and lost my mucus plug, then got on the birthing ball, napped a little, and then noticed my waters break.”

So excited to finally post my VBAC birth story of my beautiful baby girl, Nile Auria! 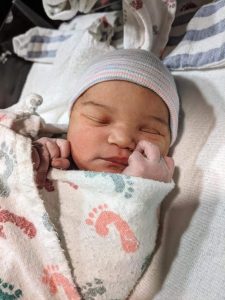 So, on Saturday I did the Miles circuit for the first time. A few hours later I started having what I thought were prodromal waves. Around 3:30 am Sunday morning I couldn’t sleep through them, I and started timing them and turned-on Birthing Day Affirmations. I called my doctor when they got 5 min apart and he had me go into the hospital. We got checked into triage and I was checked, but wasn’t dilated at all, so my doctor told me to walk around for an hour to see if I progressed.

The waves (Hypnobabies term for contractions) started to pick up again, as they had all but stopped while being checked in. They checked me and I was at a 1, so they gave me Ambien to help me get rest and sent me home. I slept most of the day, and my waves died down, but I did the Miles circuit again once the meds wore off. I knew my baby was ready, but something was holding her back, so I decided to make an appointment at my chiropractor the next morning. The waves came back overnight, but weren’t time-able or consistent, so I just decided to listen to my Easy First Stage (Hypnobabies main birthing day track) because I knew my birthing time (Hypnobabies term for labor) was coming soon.

I got to the Chiropractor at 9:30 am, and I had a really good adjustment. My waves slowed down but got consistently 10 min apart by 11:30. We got home, and I took a nap but, by 1:25 waves became 7 min apart and more uncomfortable. I Called the doctor at 2 pm and told him they were at 7 min apart for the last hour (his rule of thumb) and they told me to head into the hospital. Hubby wasn’t convinced and put up some resistance because he didn’t want to be sent home again, but he put on his shoes and we headed out. That made me so mad that my waves picked up to 3-4 min apart during the drive, but then leveled out to 5 mins apart by the time we got to the hospital.

We checked in around 4 pm. I was 1.5 cm and so excited. I walked for an hour but was barely a 2. At 7 pm My doctor said I could either go home or be admitted and take morphine and Ambien to get some rest. I told them I would stay but would only take the Ambien whenever they got me into a room. My waves were then at 2-3 min apart. They got me into my room at 9:30 and that’s when my waves intensified. By this time, I was being very vocal through the waves. A mix between “aaaaaah” and “Relaaaax” (Hypnobabies cue to deepen hypnosis) and “Peeeeace” (Hypnobabies cue for instant physical comfort).

I had been listening to Easy First Stage all this time until now, and I was getting annoyed at listening to the same thing, and I wanted to give up because of the lack of progress. I was telling my husband I couldn’t do it, and he reassured me that I could, and I was doing a great job, just keep listening to your tracks and focus your hypno-anesthesia where you need it. I told the nurse I wanted to rest and sleep, so give me both morphine and Ambien. My hubby was upset I wasn’t sticking to my birth plan, and he kept trying to talk me out of it, which got him “shushed” extra hard during one of my waves. I took the meds and felt so good that the edge came off and I was able to cat nap in between some slightly intense waves (I didn’t feel every wave though, only the intense ones at that point).

The nurse checked me, and I went from a 2-7 in one hour, but I was so focused, I didn’t show my excitement, as I was convinced this still wasn’t time, and something would stall my progress. I went to the bathroom to pee and lost my mucus plug, then got on the birthing ball, napped a little, and then noticed my waters break. The nurse came in and I laid down. I was a bit loopy from then on, but my hubby said I was in and out of sleep. They told me my doctor was here in surgery and he would stop and see me in a bit! Then all of a sudden (no recollection of time) I yelled to my husband, I have to push, go tell the nurse. He was confused, and thought he needed more details, but I was like “just tell them I need to push, and they will know”.

Next thing I know she checks me, 10 other people come in and she announced I’m complete and ready to go. Just hold out on the doctor, who was wrapping up surgery. My doctor eventually came a few minutes later, and they set it all up and I started pushing. I really wanted to do mother directed pushing, but I don’t even think I would’ve known how I wanted to push because the pressure was so intense it felt like a bowling ball. The pushing was discomfort free and lasted 4 waves (I got 2/3 pushes each wave). They were telling me what a good job I was doing and how I was almost done, they could see her head. I still wasn’t convinced, and thought I’d be pushing for a while longer, but her head and her body came out on the last set of waves and she started crying immediately. I was so proud of myself, and even though it was more intense than I expected, I got my baby and my VBAC! I couldn’t have done this without Hypnobabies!!