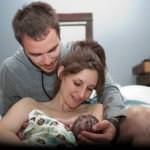 During my whole pregnancy, Chris and I had been planning to have a very natural Hospital birth. Every appointment we would ask our dr about doing it as naturally as possible and he acted like we could do this however we wanted. Slowly I would ask him specifics such as not being hooked up to monitors and fluids. As well as eating if I felt necessary.

Of course I started to realize then that his idea of a natural birth was VERY different than mine. He also told me every appointment that I should go ahead and watch the epidural video “just in case”. This told me that he wasn’t taking me seriously, and thought that I would resort to the epidural. Well at my 38 week appointment he informed my husband and I that he had read my chart wrong and …

I have had Gestational Diabetes the whole pregnancy.

So he recommended that we be induced that Wednesday or Thursday.  I was really surprised he brought that up since we had been talking to him about not using drugs, epidural, and letting my body do things naturally. We told him that we didn’t want to induce cause I was close enough to my due date.  He sent us to get a sonogram to make sure the baby wasn’t too big.  The sonogram specialist told me that I was very borderline gestational diabetes according to my test results. He also told me that the test used to diagnose gestational diabetes is pretty inaccurate.  When they measured the baby, he was measuring 8lbs 11ounces (2.5weeks before I actually had him).  So now my Dr. was telling me that I had a big baby and if I waited he would be over 9 pounds. He even at one point told me “my baby could die”. It seemed like he was pulling every excuse out of the box to induce me. This whole time my mommy instinct is kicking in and something told me that there was nothing to worry about and my Dr just wants to make sure it was on his schedule. (My due date was the Friday that spring break starts…)

I also started to feel like it was a lose-lose situation. If I got induced then there was NO way I would have been able to not have an epidural because the Pitocin makes your birthing waves so strong. And if I waited till I went into labor naturally, my doctor was more likely to give me an emergency C-section because he thought the baby was 9 pounds already.  SO Chris and I decided to get a second opinion from a midwife. We went to her for a more natural opinion on my situation not really with the intention of deciding to do a home birth. She told us a few things that confirmed I didn’t have GD and felt around on my belly and said Linc might be about 8lbs. Our first visit was about 2 hours long and we felt so comfortable with her that we pretty much made the decision that we needed to have a home birth before we left her office.

The next day, I fired my doctor and had all my information transferred to my midwife.  We met with her two more times before I went into labor. She taught us more in our three appointments then our Dr. ever did in the whole 9 months. I felt so confident with my Hypnobabies home study course (I started at 26weeks preg). The idea of having a home birth felt so right to me. The daily affirmation cd was THE reason why I could change caregivers. It was the only way that I knew my baby and I were safe and healthy.

Chris and I were in Sweetwater TX (45min away) eating at my cousin’s house. I was one day pass my “due date”. At about 9:30pm I all of a sudden felt a gush of something down there! Not big enough to be my water breaking but definitely enough to catch my attention.  So I went to the bathroom and my undies were wet and when I wiped and I had “bloody show” YAY!!!  So Chris and I headed back to Abilene. I started having birthing waves on the way home and started timing them. They would be 8min apart and then be 5min apart and then 10min apart. So really inconsistent.

I didn’t say anything to Chris about having them or timing them because I didn’t want him to get all excited before I was sure it was happening. We got home at about 10:30pm and I told him we should go to bed and get some rest just in case I wake up in labor. I called our midwife before I went to bed to give her a heads up on the bloody show and my birthing waves had just evened out to be about 10 min apart.  She told me to get some rest and try to sleep. She called me at 12:00am to see if I wanted her to come check me before she went to bed. I told her no, I would just call when I felt I was ready for her. After that I couldn’t go back to sleep so I popped my headphones on to listen to my Hypnobabies tracks. I sat in a rocker for about 1.5hours breathing deeply through my birthing waves. Not in pain at all, just felt pressure.

I decided to get in the bathtub at one point because I just felt like the warm water would be so comfortable. Still listening to my Hypnobabies tracks on my iPod. Time was passing so fast. Every time I would look at the clock another hour had gone by but it only felt like 20min to me. I noticed my birthing waves seemed to be getting closer so I decided to time them. They were about 3 min apart and 1 min long.  I was in denial so I went to wake Chris up to have him time them.

Back in the tub.  Chris timed 3 of them and they were 2 and 1/2 min apart and about almost 2 min each!!! This was crazy cause I felt so relaxed and comfortable I was in disbelief.  So he went and called our midwife while I continued to lay there and breathe through my pressure waves.  She got to our house at about 3:30am and checked me. I was at 7 cm! Yay!!  Her nurse assistant got there when I was at an 8 and she was making comments like “well you sure don’t look like a first time mommy” and “you definitely don’t look like you’re at and 8″ lol! I loved hearing that.

My body started to do the “natural pushing” which was such a cool experience. My midwife, husband, and nurse assistant just sat there watching me. I decided to get on the birthing ball for a while to just mix things up. After about 25min, I got back into the water cause I felt more relaxed with the warm water all around me. I told Chris to go get the midwife cause my body was doing a lot of pushing on its own during pressure waves. She came and checked me again and said I was at a 10 and I was complete! YAY!!! I was so excited! Still in no pain and still very relaxed.

Chris and I shared a kiss or two and I told him we were about to have a baby soon! We let my body push on its own for another hour or so and the midwife, nurse, and Chris just sat there and watched me as I laid there completely relaxed and comfortable in the tub. My midwife told me the next day how she could have watched that for hours cause it was just SO BEAUTIFUL! hehe

My water broke on its own. Another awesome thing to experience!

We got out of the tub at about 7:00am and went into the bedroom to do some pushing. This was harder than I expected but still not bad at all. Just very different. Not painful, just a different zone. I pushed for about 25min and Lincoln Christopher Munn was here! Right before he came out something told me to open my eyes or else I would miss it. And sure enough just as I opened I saw this head and then this body was on my tummy!! AMAZING!! And I forgot that I didn’t know if it was a boy or girl. I was just so happy to have a baby. We finally looked and it was a boy! And he was perfect!

I breastfed him right away and my midwife cut the cord. (Chris didn’t want to)  Chris and I got to climb into bed and hold our little baby for a good two hours before they took him to be weighed or measured. He weighed 8pounds 6ounces and was 19 3/4inches long!

I was SO happy we ended up having a home birth. I’m not sure I would have been able to stay in my relaxed state once we got to the hospital. And I probably would have waited too long to even go to the hospital! haha I was in denial that I was as far along as I was.

Oh yeah, I found out later that my Dr. was out of town for spring break, so he wouldn’t have been there to deliver Linc. Which pretty much confirms that he used scare tactics to convince me to be induced so he could check me off his list.

Linc was born 2days after my “due date”

My Husband Chris was such a great birthing coach.

I could not have had such an amazing experience without Hypnobabies. A great birth is priceless! I would pay $15,000 for that Hypnobabies home study.

Here are some pictures of me during my birthing time. Most of the pictures were taken during a pressure wave. Yes I was as comfortable as I looked. It was beyond awesome.