“The entire time I was smiling and relaxed through every wave. I attest that 100% to Hypnobabies.”

I should start off my saying that I gave birth abroad – I’m an expat in Russia. I found Hypnobabies and was set on having a minimal intervention/ medicine free natural birth. 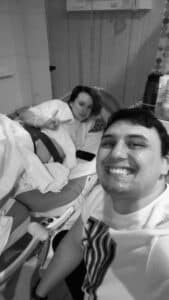 I carried 2 weeks past my guess date (Hypnobabies term for due date) and my provider decided to induce me as my cervix was not effaced at all. They gave me a misoprostol, or the Russian equivalent of that, and told me to “wait and see what happens” under observation. I was admitted to the maternity ward, but my husband was not allowed to accompany me until my birthing time (Hypnobabies term for labor) started.

I waited around 6 hours and started feeling pressure… but I had been experiencing Braxton Hicks for the last 4 weeks, so it was actually pretty difficult to decipher if they were birthing waves (Hypnobabies term for Contractions) or not. I turned on the Your Birthing Time Begins track (Hypnobabies reminder of all the tools for birth) and stayed calm… I ended up calling the night shift nurse (it was about 10 pm) and told her I thought my birthing time had begun. She didn’t believe me and told me to record my waves for an hour and come back and show her the results. 30

Minutes later they were 5-7 minutes apart, so I approached her again and asked her to call my OB. My OB apparently had come down with COVID, so another doctor was called.

They put me on a fetal monitor to see if I was really having waves before calling anyone out. The waves weren’t registering on the machine for some reason, but they were becoming stronger and stronger. I stayed calm and was so filled with joy that I would soon meet my baby that nothing else mattered. As I laid there on the monitor during my hospital birth, I felt a burst of liquid and assumed my waters had broken… I called the nurse AGAIN and said, “excuse me, I think my waters just broke” and was met with disgust they called the night shift OB to check me. The waters were green, so they brought me down to the hospital birthing ward where my doctor was waiting for me. 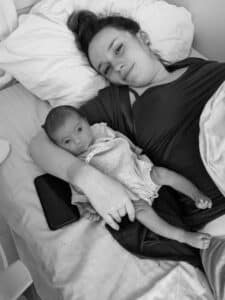 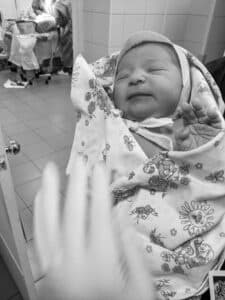 They told me I had a 6-hour period to try and give birth vaginally. If I didn’t do it in that time frame, they would do a C section. I remembered something from Inna Mays book about the sphincter law, that women have been known to give birth more quickly when they face some threat. I hoped that might work in my favor! And I was thrilled that they were giving me a chance to try it on my own. The only downside was I had to be on the monitor the whole time, which meant I had to be lying down on the bed. I was quite upset that I couldn’t do ANY of my comfort techniques that I’d been practicing with my BP. Only breathing and counter pressure were my friends those next 6 hours. The entire time I was smiling and relaxed through every wave. I attest that 100% to Hypnobabies. I didn’t even listen to any tracks – I just kept breathing and relaxing in my safe place. It was really amazing.

6 hours later I was still not dilated enough to push so they whisked me off to the OR where my daughter was quickly born via C section. My husband did skin to skin with her.

Despite my hospital birth not going at all according to plan or my hopes, I was so positive and relaxed throughout every plot twist and unexpected change. Hypnobabies prepared me to be positive and to advocate for myself and my baby and I’m so thankful for everything it taught me!