“Hypnobabies helped me learn my options and be confident in all the choices I was making during my birthing time (Hypnobabies word for labor), even when they were not what I had planned for. The hypnosis helped me stay focused and calm through a long-time frame of intense pressure waves.”

On Monday 9-30 (my actual guess date) at about 5:30 pm, I was getting ready to head out for a walk with my friend. I had listened to the Come Out Baby track earlier that day to start gently encouraging baby’s arrival but was not expecting anything to happen that day. As I stood up from putting on my shoes, I suddenly felt like I was peeing my pants. I ran to the bathroom yelling “oh sh$!” and my husband was left very confused. After I confirmed it was, in fact, my water breaking (clean smell), I called my friend to let her know. Since I was not having waves, we decided to still go on our walk in hopes that would get things going. I put on a large pad and we did a long walk in our neighborhood. 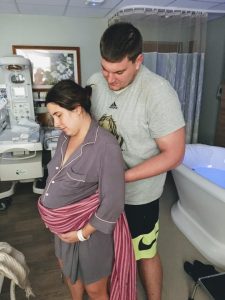 As we returned I could feel very mild pressure waves (Hypnobabies word for contractions) starting but they were nothing consistent. I called the hospital to let them know that my water had broken so they could alert my midwife. They implied that I should come in immediately but I told them I planned to stay home for a while and allow things to progress. I listened to Your Birthing Time Begins (Hypnobabies reminder of all the tracks and tools for birthing) while my husband made me dinner. I figured I should eat a decent meal while I could.

After dinner, I listened to Birthing Day Affirmations and Deepening (Hypnobabies track to deepen the level of hypnosis). My pressure waves began to become more noticeable but I was able to maintain my hypnosis through all of them. I also rubbed on Clary Sage essential oil and did some nipple stimulation with my husband as we tried to progress things. Once I felt like my waves were consistent my husband and I began to time them while I listened to my tracks. At about 12:30 am we decided to head for the hospital as my waves were the 5-1-1. I listened to Easy First Stage (Hypnobabies main birthing time track) as we drove and my husband checked us in. 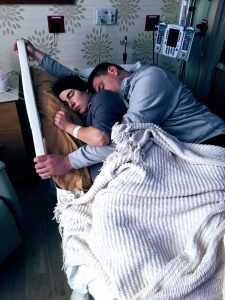 I allowed the nurse to check my cervix upon check-in but asked her not to tell me the number. Shortly after that my mom and doula arrived as well. I got into the birthing tub in our room through some pressure waves but ultimately found that I was not able to turn off and relax through pressure waves the way I wanted to. As the morning continued to progress, I continued listening to Easy First stage in various positions keeping my switch either in center (Eyes open hypnosis) or off (fully supported hypnosis) depending on the position. The waves were gradually getting more intense but were still manageable with my hypnosis. I was finding that their primary intensity was located in my back which was uncomfortable at times.

My midwife came in mid-morning to check on me and asked if she could check my dilation. Although I hadn’t wanted to know the number earlier, I trusted my midwife to tell me. Unfortunately, I was only at 2 cm. I was very disappointed to hear that number as I had felt that I was progressing and that baby was much closer to coming than that. I had even felt sick during some waves so I thought I was close to transformation (Hypnobabies word for transition). Because my water had ruptured, we discussed that we did need to start seeing progress but that she knew I wanted to avoid medical intervention. We agreed that I could try some positioning and the abdominal lift and tuck with my husband to try to get things going and recheck later. We worked on positions throughout the morning but when the nurse checked me again, I still had not progressed. 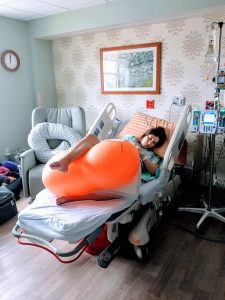 My midwife recommended vaginal Cytotec and I agreed to the treatment in the early afternoon. My husband read me the Change of Plans script (Hypnobabies special script for if birthing takes a different path) to help me accept the medical intervention I did not originally plan for. Meanwhile my pressure waves were getting stronger and longer. I was finding them harder to manage but did find that staying in center allowed me to verbalize my Peace cue (Hypnobabies cue for instant physical comfort) out loud and sway my hips to relieve some of the pressure in my back. We tried lots of positions, used the shower, walked the halls, and did just about everything my doula could think of to get things going. Unfortunately, I had only progressed to 4 cm by 5:30 pm (24 hours since my water broke).

My midwife recommended we start Pitocin to which I agreed. We started it at the lowest level possible hoping to get things going. I was able to get to about 5 cm by late evening, but my midwife also shared that my cervix was very inflamed even though I was 100% effaced. Meanwhile, my pressure waves were getting very intense and I was having trouble focusing on my hypnosis through them. My doula, husband, and mom were so supportive through it all but we all were exhausted. 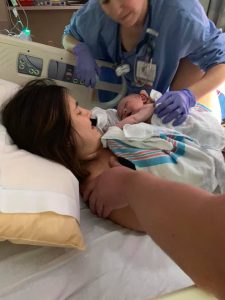 Around 10 pm, my midwife and I had an honest discussion that, although there were no indications of infection or distress, we were heading in the direction of a C-section with the slow progression and that if I wanted to try for a vaginal birth, I needed to get some rest. I chose to proceed with an epidural so they could increase my Pitocin and hopefully get me dilated. The amazing nurse I had that night had also just finished her Spinning Babies course and was very dedicated to helping me get baby into a better position to help me dilate. Once the epidural was placed, she helped me do various positions while I rested. My midwife also had Benadryl administered via my IV as it had been shown to help with inflamed cervixes.

We agreed that we would check me again at 5 am and if I had not progressed that we would move to a C-section. I was admittedly somewhat heartbroken as it did not seem like I was ever going to progress. Thankfully, all the things we tried worked and at 5 am I was at 9 cm and my cervix inflammation had greatly decreased! I breathed a huge sigh of relief and I knew we were in the home stretch. It took until about 12 pm for me to get to complete. My epidural had started to wear off, but I didn’t immediately feel the need to push. I continued to listen to hypnosis tracks and try to stay in center/ off as I started to feel the pressure waves again. As I wasn’t feeling the need to push, I elected to do coached pushing with the nurse instead of mother directed pushing. I slowly began to push her down but my waves were not coming very close together. We were also working on finding a position where I was most effective at pushing. We ended up choosing a position where I had my feet propped against the squat bar and I was using a Rebozo to pull myself up to push. 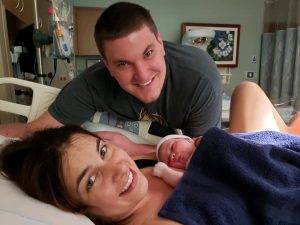 Finally, at about 2:30 pm, my midwife came in and said the words I had wanted to hear “We are going to have a vaginal birth”. I started to really push at that point and made progress quite quickly. We played the hypnosis music out loud in the room, but I did not feel the Pushing Baby Out track was appropriate for the pushing method I had chosen. The moment where I was able to reach down and feel the top of baby’s head gave me a huge rush of energy and I knew I was going to be able to do it. After about 45 minutes of active pushing, my beautiful Hypno-baby entered the world at 4:04 pm on 10-2-19. My husband announced that it was a girl and she was immediately placed on my stomach. It was truly the best moment of my life and 100% worth all 46 hours that it took to get her here. After my husband cut the cord and I pushed out the placenta, we were able to get her to latch on to breastfeed for about 45 minutes and really enjoy the golden hour with our beautiful baby. 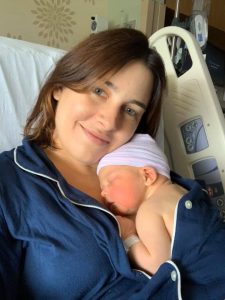 I give huge credit to Hypnobabies for what was the perfect birth for us and especially me being able to have a vaginal birth. I believe that if I had not been so informed about my choices and so clear with my midwife about what I wanted, that she would not have fought so hard to give me a vaginal birth. Because she understood how strong my desire was, she worked with me to make choices that led us to the path we ended up on, despite the fact that a lot of medical professionals would not have wanted a woman to go 46 hours with ruptured membranes. 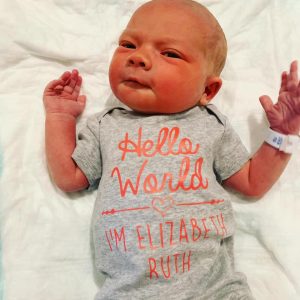 Hypnobabies helped me learn my options and be confident in all the choices I was making during my birthing time (Hypnobabies word for labor), even when they were not what I had planned for. The hypnosis helped me stay focused and calm through a long-time frame of intense pressure waves. Many of the nurses along with the anesthesiologist and my midwife commented on how strong and calm I was through the whole thing. Thank you to Hypnobabies for helping me bring my beautiful Elizabeth into the world in the perfect way for us!