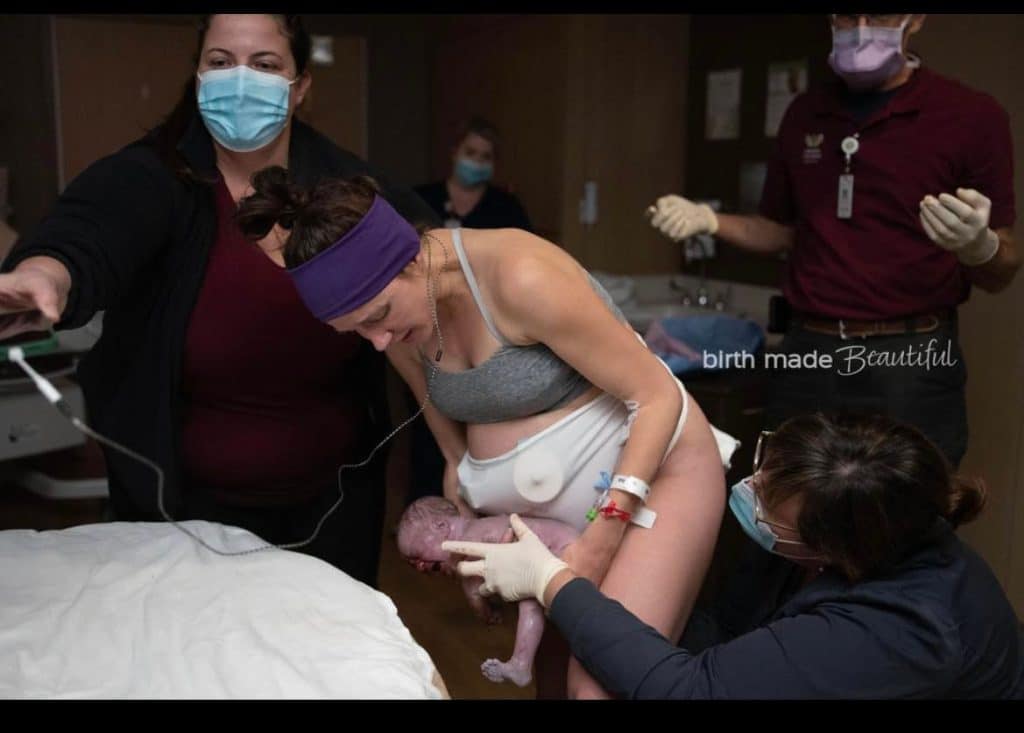 “I climbed out of the tub and 5 or 6 pushes later Charlotte was born breech as I stood at the end of the bed. At this point I climbed on the bed with Charlotte on my belly. It was a crazy experience to have one baby on the outside and another one still on the inside!”

I have been asked by so many people for the birth story of our twins, Charlotte and Beckham. Finally, two months later, I am getting around to writing it! Clearly an indication of how busy life has become with 5 kids ! Their pregnancy and birth is such a story of God’s goodness and redemption.

We found out we were pregnant again in February of 2022, three months after a miscarriage. The early weeks of the pregnancy were very hard emotionally following a loss. One of the hardest parts of a miscarriage is the joy it tries to steal from future pregnancies; always worrying and wondering if this pregnancy will bring a baby in the end. 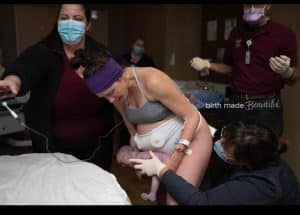 My worries were magnified when I started to have a ton of bleeding, at the exact point in the pregnancy that I had miscarried two times before. This bleeding led us to schedule an ultrasound to see what was going on. I was certain that this ultrasound would confirm my worries of a miscarriage, yet again. I walked into that appointment begging God to see one heartbeat. Never in a million years did I expect we would see two! Jeff and I were speechless as the tech scanned one sac, then a second, both filled with a fluttering heartbeat.

The discovery of twins led us to search for a care provider who would support a natural pregnancy and birth if possible. We ended up finding a phenomenal OB in Baldwin Wisconsin; Dr. Hartung. He is an OB with an amazing reputation in the birth community for supporting natural birth and is also one of the few providers versed in breech birth as well. So, while some people thought I was a little crazy for picking an OB over an hour away, I felt in my heart this is who we were supposed to work with. I also found an amazing pair of doulas; Kara Jo and Cassie that were so supportive throughout the entire pregnancy and birth. 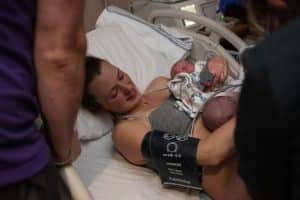 While the babies were healthy and growing at every appointment, I would be lying if I said the pregnancy was easy. Turns out growing two babies is much harder than growing one! I struggled with an “angry” gallbladder for much of the pregnancy, pelvic and leg varicose veins, heart burn, horrendous reflux and so many physical aches and pains. I am so thankful for my amazing team at work who kept me going with nutritional support, adjustments, bodywork and for picking up so much of my workload during these months. I could have never made it through without their support. My hubby was pretty phenomenal too! In the last few months of pregnancy, he would take over every night once he got home from work and put the kids to bed, so I could soak in an Epsom salt bath (my favorite part of the day :)).

During our 32-week ultrasound, we discovered that Baby A (Charlotte) had turned breech after being head down up until this point. Initially, I wasn’t worried, because this is something I help mamas with all the time. So, I started doing all the things that I coach my clients to do; multiple Webster technique adjustments each week, spinning babies stretches/exercises, homeopathy, acupuncture, moxibustion, Hypnobabies tracks…you name it, I tried it!

As the weeks went on, it became very apparent that Charlotte was not budging from her breech position. Having twin A in the breech position typically means a C-section for most providers. However, being Dr. Hartung is so versed in breech birth, we continued to plan for a natural birth, as long as all things went smoothly. The final two months of the pregnancy consisted of weekly trips to Baldwin for non-stress tests to ensure that the babies were doing well. 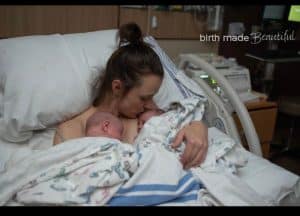 During our appointment at 38 weeks and 5 days, we decided to do a cervical exam to see where things were at. Apparently, my months of Braxton hicks had been doing something as I was already almost dilated 5 cm! At this point, Dr. Hartung recommended we break baby A’s water to get birthing time (Hypnobabies term for labor) going and thought that was all it would take. Being we lived so far from the hospital and knew we needed our specific doctor as baby A was breech, we decided to go through with that plan. Just 45 minutes after he broke my water, real pressure waves (Hypnobabies term for contractions) started. For the first two hours I laid in bed listening to my Hypnobabies tracks. I used them for Remy’s birth and found them super helpful, so I had been listening to them daily for this entire pregnancy. These tools were so helpful in allowing me to relax and probably the main tool that allowed me to have an all-natural, medication free birth.

After a couple hours, I was very ready to get in the tub. After two hours in the tub, the babies were ready to come. I climbed out of the tub and 5 or 6 pushes later Charlotte was born breech as I stood at the end of the bed. At this point I climbed on the bed with Charlotte on my belly. It was a crazy experience to have one baby on the outside and another one still on the inside! Shortly after Charlotte was born, they found baby B’s heartbeat and confirmed he was still head down. Being he was in such a great position, we decided to break his water and two small pushes later, he slid out. His birth was much easier and felt more like a large placenta than an actual baby coming out . Several minutes later both placentas came out as well. 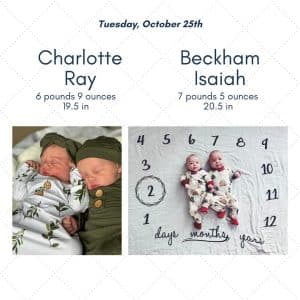 In the end, my birthing time ended up being only 4 hours start to finish. I would have never guessed that birthing twins could go so smoothly and felt much like the birth of one baby. When I found out I was pregnant after the miscarriage, long before I knew that 2 babies were on the way, God gave me this verse, “Forget the former things; do not dwell on the past. See, I am doing a new thing! Now it springs up; do you not perceive it? I am making a way in the wilderness and streams in the wasteland”. Isaiah 43:18-19. Little did I know what, “New Thing” he was doing! God has redeemed so much with these babies and they have brought our family so much joy!