“I started to push, “ahhing” through and feeling energetic, happy, and powerful. I could definitely say there was pressure, but it wasn’t painful. I was laughing and joking with the nurses and the midwife in between pushing waves.”

Birth Story of Ronan! It was magical and everything I could have hoped for. I felt so powerful, in control, and happy. Second baby, first Hypno-baby. 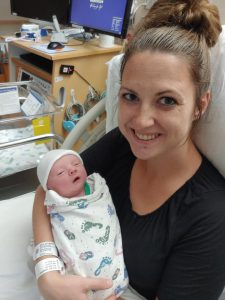 Around week 35, I noticed my baby had dropped. From that point on, I was getting some decent practice waves multiple times a day. On Sunday, August 23, at 37+3, I started feeling pressure waves (Hypnobabies term for contractions) around 10:30 in the morning. The waves began ten minutes apart and were lasting two minutes. By 1:00, they were three minutes apart and getting stronger. By then, we had called my MIL to come get our son and my husband had finished packing (and finally reading his portion of the Hypnobabies book).

We got to the hospital (a quick ten-minute drive) and went through to triage. I was at 3 cm and 70% effaced. However, after the first hour of monitoring, there was no progress. They monitored for one more hour, but the waves seemed to have slowed down to about four an hour. They decided to send us home.

I’m not gonna lie, I was super disappointed. But as the week went on, I learned to become very grateful for the experience. First off, I had become a little lax in my Hypnobabies practice. I had started the class early on accident (20 weeks) and by 34 weeks, was finding it difficult to continue the daily routine of listening due to not being able to find time during the day. I had continued listening as much as I could, but this “practice run” as we called it really helped me get the motivation to start practicing more rigorously.

I had also realized how easy it was for me to get pulled out of hypnosis. I am the kind of person that likes to be a part of everything and taking control. So it was hard to relax when I was constantly worried about how my little boy was, if my husband got everything, how to alleviate any stress he might have been feeling, and then wanting to talk to the nurses as they checked me in. (It probably doesn’t help that COVID has made it impossible to do more social activities and I was dying to talk to people, hahaha).

I put a post on here for advice on how to stay in hypnosis and I was so grateful for the responses. And here’s why!

On Saturday, August 29, I woke up at 7 and went to the bathroom. I immediately felt something was different (like I still had to poo even though I’d just gone). I didn’t want to get my hopes up though and started making breakfast for my son and me. I felt some strong practice waves (or at least, that is what I was calling them because I had been feeling them all week since our practice run – stronger and way more intense than the ones I had been experiencing the previous weeks) and had to stop a couple times while getting food on the table. I had considered calling my husband (who had left at 7:30 to go play some sports with his buddies), but he had been looking forward to going out with his buddies all week and I just couldn’t call until I knew for sure that this was the real thing.

However, he found out sooner than expected when my aunt had asked if I could water my grandmother’s garden that morning and I explained I couldn’t due to the fact that I might have been starting my birthing time (Hypnobabies term for labor). Unbeknownst to me, my husband was a part of the message group and immediately called me. I told him not to worry and I would call him if they got more intense. Suddenly one hit while I was on the phone with him and he decided he’d come home when he heard me moan through it (I wasn’t using my hypnosis yet due to my son being home, but I was using the low “ahhh” sound to help me cope until I could). I called my SIL to come get my boy until my MIL could show up. This was something else we learned in our practice run, my MIL lives 35 minutes away and I couldn’t start hypnosis until my boy was out of the house. But my SIL only lives 5 minutes away and she said she could help.

At 10:00, the waves were four minutes apart and the pressure was building (though by this time I was in hypnosis and everything was very manageable, I was very relaxed and comfortable). I told my husband it was time to go. We got to the hospital by 10:15 and I was checked around 10:35. The nurse was great and said she wasn’t even going to monitor until she knew my dilation because she could tell the waves were coming fast. I was a 5! She quickly got us to our room and called the midwife. 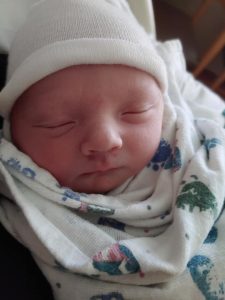 I was completely in my hypnosis and ignoring everyone, chanting (as the advice on my post had suggested) whenever someone came in to help me focus. The waves got to a point though where it was becoming very difficult for me to stay completely relaxed, so to relieve some energy, I did more “ahh-ing”. My husband knew then to do my ‘Relax’ cue (Hypnobabies cue to deepen hypnosis) and that helped a ton. He was also very good at telling everyone to be quiet so I could focus. In between these waves, they did the COVID test. I look back and laugh because I now realize that was my transformation phase (Hypnobabies term for transition)! If you knew anything about my first birth, you’d understand why I was in complete shock afterward that I was able to handle that during transformation!

One wave was very intense, and my moaning wasn’t helping. The idea to push came to mind and I figured I’d try it…and it felt SOOO GOOD! One of my goals this time around was to feel pushy. I was so exhausted and confused the first time, I didn’t know what that ‘pushy’ feeling felt like and I wanted to this time. I realized during that wave that I was pushy and told my husband to go get the nurses. According to him afterward, they all rushed in when he told them and I’m so grateful they were so attentive to me.

Another blessing was that the midwife had just arrived. She checked me and I was a 9.5. My water hadn’t broken yet, but that was another goal I had, to feel my water break naturally if possible. I started to push, “ahhing” through and feeling energetic, happy, and powerful. I could definitely say there was pressure, but it wasn’t painful. I was laughing and joking with the nurses and the midwife in between pushing waves. 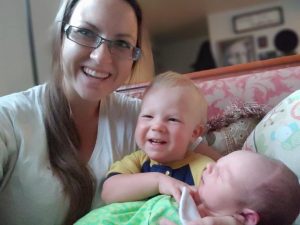 After about seven waves, my water still hadn’t broken, and they joked the baby would be born in the bag. One of the nurses offered a different position and I decided to try it. The following wave, my water broke! It was a glorious feeling, followed quickly by the need to push more. Another wave hit and I could feel my son’s head in the birth canal. One more wave hit, where I pushed twice – once to birth his head and the second to birth his body – and a powerful shout to birth my son (I’ve always been a vocal person and I needed this to help direct my energy – kind of like how a body builder grunts to lift weights – it was not a shout of pain, but of power).

His warm body slipped from me at 11:52 (that’s 4 ½ hours of waves and only an 1 ½ in the hospital!!! I was in shock) and was immediately put on my chest. He weighed 6 lbs 14 oz and measuring 19 inches. He was perfect, getting a 9 on the APGAR scale. The nurses and the midwife congratulated me and for the rest of the day and the next kept telling me how amazing I was. It felt so good to not only experience an amazing unmedicated birth (and I’m so grateful there were no complications to hinder it), but to show others that it is possible without suffering which was not how my first went. When I called my mom to tell her how it went, she cried in relief because my first had been so hard for me. But I thank Hypnobabies for giving me the tools to have my dream birth this time!!