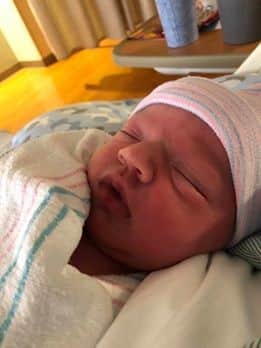 “And with the next few waves, my body still pushing, I felt baby girl crown. It was at this point I announced, “that’s a baby” and, according to my husband, the nurse’s eyes got wide as she called for help. I was in my birthing zone but knew the room was a bit chaotic around me as they tore down the table and set everything up, actual OB still on the way.”

This was my second Hypno-baby, and while I know every baby is different, I expected I would instinctively know what to do. Instead, this girl kept me guessing and guessing and guessing. I started losing my mucus plug on Friday and was told at my OB appointment the following Monday that I was 3 cm dilated and 60% effaced. Having had practice waves for a while, it was validating to know they’d been productive. On Wednesday, I woke up to consistent pressure waves (Hypnobabies term for contractions), every 10-15 minutes lasting around a minute. After timing for a couple hours, they were staying consistent and picking up in intensity, so I called my mom to come help with the toddler and called my husband home from work. 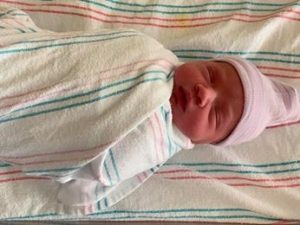 By evening, they had picked up to 3-5 minutes apart, with the same intensity. With my first, intensity was never an indicator of progression, so the frequency made us go ahead and head to the hospital. Turns out, I hadn’t dilated anymore, so given the choice of staying for augmentation or waiting it out, we turned around and went home. The Fear Clearing track (Hypnobabies track to release fears) really helped during this time. With very few waves all day Thursday, I decided to try some curb walking and the miles circuit Thursday evening. At 11:35 pm, I was awoken with a strong wave, so I decided to rest a bit and they stayed consistent most of the night but fizzled out around 4 am. On Friday, I was a little concerned I was leaking amniotic fluid but couldn’t tell for sure because I’d been losing mucus plug all week. I managed to get into my OB who confirmed no leak, but said I was now 4 cm and 60% effaced. We did a membrane sweep and home I went.

Again, at 11:35 pm, I was awoken with a strong pressure wave that just felt a little different than the whole week. This time, I decided to get up and see if I could help them along. I moved to my birth ball in my living room, lights off and tracks started. The waves were consistently strong and stayed 8-12 minutes apart and at least a minute long. At one point, my toddler woke up yelling for daddy, sending my husband through the living room to check on him. It was then I let him know I didn’t think he’d be going to work on Saturday. (Honestly, I felt like it didn’t mean a whole lot at this point because he’d basically spent the last 3 days at home waiting for me to say it was time. And I’d been wrong already, so I was starting to lose confidence in my intuition.)

Around 3 am, I felt like I needed to be wherever I planned to give birth, so we got ready to go to the hospital, again. In the time it took to get ready, my waves progressed to every 2-4 minutes apart with a lot of downward pressure. I was listening to my Easy First Stage track (Hypnobabies main birthing day track) We made it to the hospital around 4 am, got into triage to find I was still 4 cm dilated and 70% effaced. The hospitalist initially said that I could stay, since I was a second time mom and things seemed to be picking up. After being monitored for 45 minutes, she came back in to say that it looked like my waves were slowing down, on the monitor. So again, we had the choice of staying or going home. We discussed my options, along with the likelihood of augmentation, if the waves really did fizzle out again.

At first, my husband and I decided we would stay. My waves were still happening with the same “different” feeling as before, and we’d discussed it in advance and decided I was ready for baby. After a few more minutes, I changed my mind and wanted to go home, but asked that the hospitalist check me one more time, just in case. This turned out to be an excellent choice because I was now 6/7 cm dilated and 80% effaced. (Every time I was given a number, while there was definitely a twinge of disappointment, it was always quickly replaced with “we do not give birth by numbers”. This was so true for me.) With intake and blood work and everything, it took until a little after 6 am to make it into a room. I spent that first half hour relaxing on the bed, hooked up to the monitors. With the shift change, our new nurse, Emily, offered to bring in a birth ball and a wireless monitoring device, which were both perfect! I was using my Peace cue (Hypnobabies tool for instant physical comfort) and saying Open, Open, Open. I felt best standing and leaning on my husband’s shoulder with each wave, gently swaying. Around 7:45 the waves started coming one on top of another. One would end and it seemed like immediately the next would start. I kept trying to go to the bathroom, but nothing would come out and I could feel the increase in downward pressure. I started getting shaky and told the nurse, between waves, I felt like I was in transformation (Hypnobabies term for transition). Around 8/8:15, I asked her to check me because the pressure was just so strong, and I was 8cm with baby at -1 station. I had maybe a handful of waves in the next 10-15 minutes, when I asked her to check again. Still an 8. I remember looking at her with a smile and saying “that’s ok! I can do this a few more hours.” And she replied with “I don’t think it’ll be a few more hours.”

Just a few waves later, I felt the need to move to a position I’d like to birth in. I didn’t feel steady enough to birth standing up, so I moved to lay down on the bed, and laying on my back just felt best. With each wave, I could feel baby girl moving down and could feel my cervix opening, and while it wasn’t fun, my only focus was on how each wave was bringing her closer. And then, I felt my body push. It was the most surreal feeling, as I hadn’t felt that with my first. I told the nurse I was feeling pushing waves and heard her call for the OB on call. In the following few minutes, she also called for the hospitalist to be on standby, just in case. 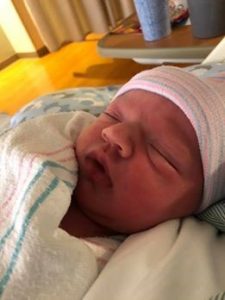 I remember feeling super uncomfortable and telling her I needed my legs in a different position, at which point the pushing boards came out, which was totally fine. They felt helpful. And with the next few waves, my body still pushing, I felt baby girl crown. It was at this point I announced, “that’s a baby” and, according to my husband, the nurse’s eyes got wide as she called for help. I was in my birthing zone but knew the room was a bit chaotic around me as they tore down the table and set everything up, actual OB still on the way. With the next wave, my body pushed, and I heard the hospitalist say I could bear down if I wanted to, and boy did I bear down. I was at a point where I decided I wanted that baby out. I felt her head push partway out with that first wave, with no slow in/out progression, and I knew I would tear. I heard the doc say “her head is halfway out” and I just wanted to kick her for not telling me the head was all the way out, so with the next wave, I pushed until her head was fully out. A couple minutes later, the next wave came, and I pushed her body out, and my baby girl was earth side. She was born around 5 hours after arriving at the hospital at 8lbs, 9oz. The on-call OB walked in as they were putting baby girl on my chest, looking a little confused as to how he’d missed it.

I can 100% say I loved Hypnobabies even more this time than I did with my first. The Birthing Day Affirmations were perfect when I thought waves were starting but not sure it was birthing day, and I felt like Easy First Stage (Hypnobabies main birthing time track) just had everything I needed to hear as I needed to hear it. During the birth of my first, I felt really out of control when I hit 8/9 cm after my water broke, but never felt that way this time around. Instead, I was able to focus on exactly what my body was doing and the role that played in bringing my baby out into the world, and I was comfortable enough to articulate that to my support people, as needed. Thank you, Hypnobabies!