On May 5th, we welcomed our beautiful baby girl, Juliana, into our family. The birth was absolutely wonderful (and it was so different from my first birth that lasted 28 hours and was very, very difficult!). I woke up at 1:30 with what I thought were just braxton hicks. I couldn’t fall back to sleep though so decided to go downstairs, get a drink, change the laundry around that we’d forgotten before bed, and then thought I’d try to time a few of the pressure waves. 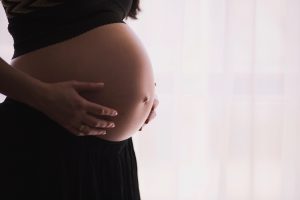 They were lasting 45 seconds and coming 3 minutes apart. I still didn’t believe this was it, even though they were so close because they really weren’t any worse than my braxton hicks had been for the past week or more and they just weren’t lasting very long. I decided to wake my husband up at 2:30 and he called our doulas and midwives. They said to take a shower to relax and then come in. So we …

I listened to my birthing day affirmations for part of the drive and then switched to Easy First Stage. The ride was long and during the windy country roads, there were some pressure waves that were harder because I wasn’t able to stay in off because I had to keep myself from sliding out of the seat (my husband was eager to get us there and the road is really curvy!) We finally arrived at the birth center and I got settled in and then at 4:40 they checked me and I was 6 centimeters. I was so excited! I got in the hot tub about 5 minutes later and was just so relaxed and on cloud nine that I was already 6 centimeters.

My doulas were laughing at me saying they couldn’t believe I was just sitting there joking and laughing. I was in center during this whole time and even during a pressure wave, I’d just rest my head on the edge of the tub and just relax. At about 4:50, the pressure waves started feeling really low and I felt like I had to be much more serious and really focus on them. My husband and doula were all massaging my back and pouring warm water over my back which helped so much. Then a little before 5:00, I felt like I had to pee so I told them I needed to pee and then about 2 seconds later was like, “I have to poop!” and just tried to get up so I didn’t poop in the tub (sorry if tmi!). The urge was just so strong that I just flipped over onto all fours and was just pushing. The doulas called the midwife in and they said the baby was coming out. I had no idea I was actually pushing the baby out – I really just thought I’d pooped in the water!

Pushing was very intense and really the only time I didn’t feel fully in control. I don’t remember having any pressure waves or anything – I was just trying to stay relaxed and say “ahhhh…..” and then all of a sudden I’d just push. I never really felt like I had to push, it just sort of happened. Then at 5:01, she was born! It went so fast – I still can’t believe I went from 6 centimeters to a baby in 20 minutes!

So, it was a wonderful, calm birth. I did tear a bit because she came out with her hand by her head and then used her elbows to push out. But they stitched me while I listened to deepening. It was truly a wonderful birth and I have Hypnobabies to thank!