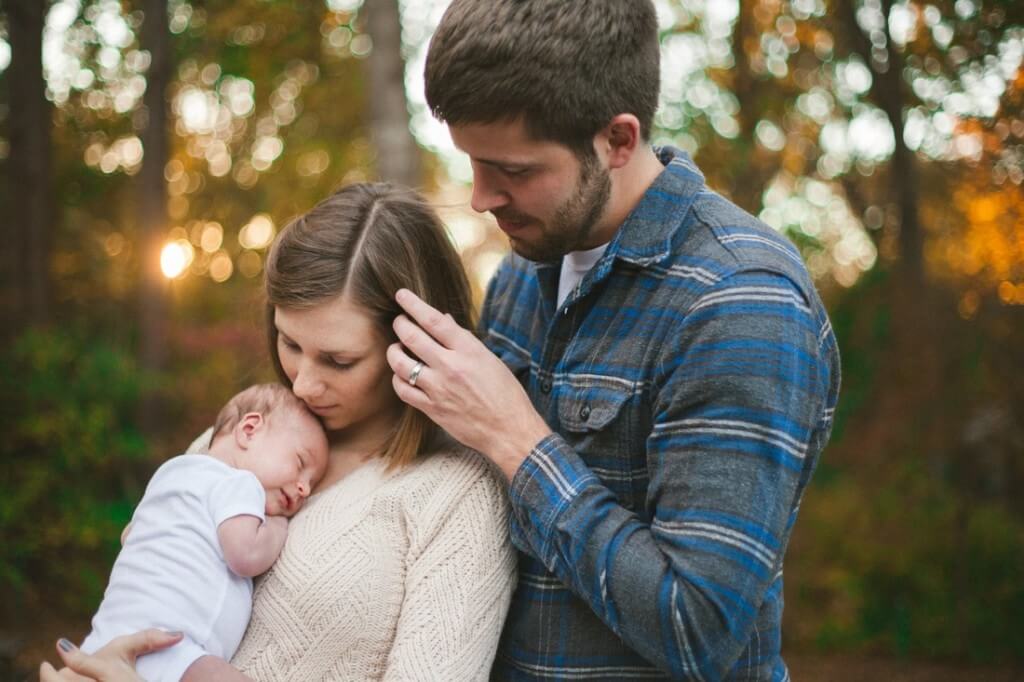 This lovely birth story comes to us from Jessica Drew, Hypnobabies Childbirth Hypnosis Instructor in Columbia, SC and Charlotte, NC

“My ‘pushy’ pressure waves felt like my body had no other choice but to push, and pushing actually felt good. During this pushing phase I didn’t feel pain, just intensity and strength. But thanks to Hypnobabies, I had come to view this intensity and power as a good thing and something to look forward to and be thankful for … “ 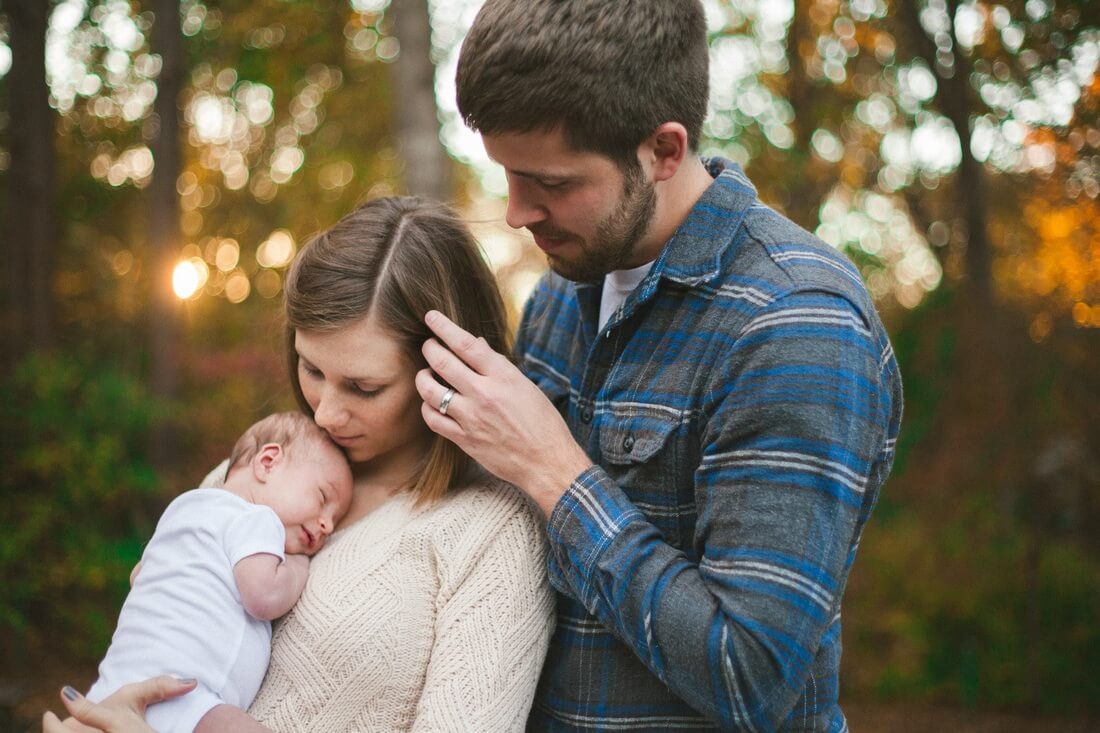 My guess date was September 30th, and quickly came and went without so much as a single pre-birth wave. Over the next few days I tried not to become discouraged as the thought of a medical induction seemed more and more likely with each day she was “overdue”, but worked to remain content and patient, trusting that she would come on her own at just the right time. I listened to my Birthing Day Affirmations, practiced my Hypnosis scripts, and surrendered my worry and desire for control over this birth to God, who I trusted knew our baby’s timing and would be with me no matter what path my birth took. I also questioned whether Hypnobabies would actually “work” for me, so I also read lots of Hypnobabies birth stories to grow my confidence.

My bag of waters finally broke on October 7th, one week after my guess date (still no pressure waves!). I felt so excited that my baby was coming, and also in disbelief that this was actually happening! I noticed that the waters were slightly colored, and my doula suspected that meconium was present. I called my doctor’s office and they suggested that I come in for an ultrasound to make sure the baby was still healthy. While waiting for the doctor, I went into center switch because I realized that this was probably the start of my birthing time! The ultrasound showed that baby was fine, but the doctor said that because my waters had broken and I hadn’t had any pressure waves yet, she would give me a 12 hour window to start laboring on my own (but noted, much to my annoyance, that she “highly doubted” that that would happen-thank goodness for the bubble of peace!). So, the plan was that I would call the doctor’s office and come in to schedule a medical induction if my labor hadn’t started by 11:30pm that night (it was currently about 2:00pm).

Now that I was “on the clock” I decided to some natural induction techniques. My husband and I walked around the block, fixed a castor oil smoothie, and spent some time together just enjoying the anticipation of what was coming. I began to notice slight sensations in my abdomen, but nothing that felt like “contractions.” I didn’t like the feeling of being “on the clock” and started to worry that my birthing time wouldn’t start on its own by 11:30pm. But with Stephen’s help I tried to keep trusting that the baby was safe and that the natural induction techniques would work. Around 5:30pm Stephen and I ate a light supper and watched a TV show while I used my breast pump to help stimulate pressure waves. By the end of the episode, I didn’t want to eat anymore and didn’t want to watch another episode (which is unusual!). My sensations were getting slightly stronger; they weren’t painful, but I just noticed them more.

Starting around 6:30pm, the Hypnobabies suggestion that “every 20 minutes will seem like only 5 minutes” really took effect. The time between 6:30pm and 10:30pm passed by quickly for me, and I really just remember squatting against the wall to help strengthen my pressure waves. I could feel them nicely at this point and they were gradually getting stronger, which made me happy. As my pressure waves became stronger I realized that I hadn’t been using my lightswitch or listening to the tracks on my Ipod like I had visualized myself doing in my birthing time. But I think that the Hypnobabies principles and techniques had become so ingrained in my mind and heart that I didn’t actually need to use my lightswitch or have the scripts read to me in the moment; it was like they were already there, and I was using them without even consciously trying to do so. As each pressure wave began, Stephen would read from the Hypnobabies scripts or recite some of my favorite Affirmations. During each pressure wave I would also recite in my own mind the Affirmations that I loved most, visualize my relaxation and anesthesia, and tell myself to remain loose and limp. All of this helped me relax and remain very calm. At no point would I say I felt any pain; I just focused on relaxing, breathing and affirming what was happening. It was actually exciting for me to finally feel these pressure waves which I had been looking forward to for so many months!

Around 11:30pm our doula arrived at our house. At this point I had to stop talking, focus and breathe through pressure wave. We stayed at our home for 4 more hours (from 11:30pm-3:30am), but it only felt like half that time to me! My doula applied counter-pressure (which felt amazing),I laid sideways on my bed (and even dozed off to sleep for a few minutes!) and sat backwards on the toilet for most of this time. During each pressure wave I would say “relaaaaax” for the length of each exhale, and this also felt so good! I was surprised how good it felt to vocalize through the length of each birthing wave. As I did, each pressure wave seemed to melt away, I think because my mind was so focused on relaxing. At one point I remember thinking “we should head to the hospital soon” but my doula felt like we could afford to stay a little longer. Finally, around 3:30am I said I wanted to go to the hospital because my instincts were telling me I would want to push soon.

We arrived at the hospital at 4:00am on Wednesday October 8th, and when Stephen pulled up to the hospital doors, I felt a “pushy” pressure wave and said, “Stephen, I think I’m pushing!”. Nevertheless, we made it safe and sound to the Labor and Delivery room. When the nurse checked me, she said I was 9.5 centimeters dilated! This was incredibly encouraging for me to hear! I had always visualized myself arriving at the hospital around 6 or 8 centimeters, so 9.5 was better than I anticipated! Also, the doctor who was on call that night was the doctor I had been praying would be on call for my birthing time, and that was another huge encouragement. She was content to let me do things the way I wanted to, so I spent about 30 minutes having pressure waves (some of them “pushy” waves) on all fours, and then changed positions and pushed about another 40 minutes sitting on the edge of the bed using a birthing bar. My “pushy” pressure waves felt like my body had no other choice but to push, and pushing actually felt good. During this pushing phase I didn’t feel pain, just intensity and strength. But thanks to Hypnobabies, I had come to view this intensity and power as a good thing and something to look forward to and be thankful for, so I was able to work along with my body to help it do what needed to be done. I told myself numerous times “I am doing this” (one of the Affirmations) to boost my confidence and resolve. The transformation stage was something I was actually really looking forward to, and as the baby began to crown, I remember thinking “this is the part where people feel the ‘ring of fire,’ but it doesn’t hurt at all!”. I just felt fullness and stretching, but trusted that my body would be soft and flexible enough to let my baby out. My doctor said to feel her head, and I’ll never forget what that was like (surreal!). A few more pushes and out came little Aubreye! The doctor put her on my chest and let the cord pulse for a couple minutes like we had asked, but then stated that they needed to help Aubreye clear some meconium and fluid from her lungs. Once she was breathing well, they gave her right back to me. I felt tired, relieved, happy and so excited that I had actually done it! The nurse and my doula both commented that they were surprised how calm and in control I was the whole time (that’s why my doula thought I had so much more time left, because I was so calm!).

Looking back, what was most helpful to me from Hypnobabies was daily practicing visualization and relaxation, and listening to the Affirmations because they really replaced a negative, fear based belief system about birth with an incredibly positive, truth based belief system. Instead of going into birth uninformed, worried or fearful, I went into birth confident, prepared, grateful and educated, looking forward to the things that I would have otherwise dreaded (pressure waves, the “transition” stage, etc). During the birth, what was so helpful to me from Hypnobabies was visualizing relaxation and anesthesia, reminding myself to remain loose and limp, vocalizing “relax” through each pressure wave, and reciting in my mind my favorite Affirmations and phrases from the hypnosis scripts. Throughout the whole birthing process, I never once considered the need for an epidural. For me, birth was definitely an intense challenge, but I felt safe, supported and strong enough physically and mentally to give birth naturally. As I prepared with Hypnobabies I often questioned whether it would actually “work” for me. But now I have experienced just how effective Hypnobabies really is! It trained me to believe that what I expected to feel and experience would, in fact, come to pass. And that is exactly what happened.