“With Hypnobabies I remained calm, made an informed decision, and had full confidence that this was the wisest decision for me and my baby.”

Our hypnobaby was born March 1st. 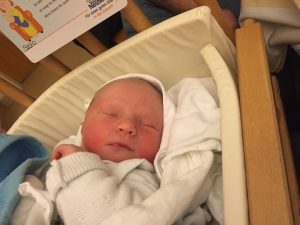 We were planning a vaginal birth with a breech baby, and I ended up being flown to the hospital in a chopper. I was so calm that they questioned whether it was time, but we had amniotic fluid everywhere to prove it. And the ER doc in the chopper actually (somewhat jokingly) asked me to make a big deal and yell a bit when they rolled me into the hospital to justify an air flight. He was hilarious and I loved his sense of humor.

When we arrived at the hospital an hour and 15 minutes after my water broke, which immediately triggered pressure waves, I was dilated to 10! On the chopper I had focused on the words Open and Relax while staring into the fluffy clouds in a bright blue sky. I took slow, deep breaths and breathed through increasing pressure waves with ease.

At the hospital, the OB couldn’t believe it. She was taking her sweet time and suddenly said oh my you’re staying here.

They got me into a birthing room and my doula joined me. My husband arrived about 30 minutes later. The Hebomme (midwife in Germany) checked on us for the next five hours and couldn’t believe I was talking, laughing and smiling. At some point we put on the Birthing Day tracks because my doula and I felt it was time to go inward and focus like I had on the chopper. That worked. I experienced transformation, and I was quickly getting closer to baby arriving!

After about two hours of these stronger pressure waves (transformation in my birthing time) it became clear to me that the baby was not progressing. An older, more experienced Hebomme confirmed that at least in one position the baby was not able to move past my pelvic bone because of his Frank breech position. We tried other positions, but I didn’t feel progress and the Hebomme confirmed he had not moved any farther.

At that point I decided it was time to opt for a cesarean. The hospital staff was willing to let me try longer, but my body told me this was not working. And I was concerned that continuing would result in a traumatic experience. At this point I had breathed through about 7.5 hours of pressure waves at full dilation.

I had been terrified of a cesarean because I react to so many medications and am in a foreign country. But with Hypnobabies I remained calm, made an informed decision, and had full confidence that this was the wisest decision for me and my baby. The cesarean went perfectly. I had no reactions and woke up wanting to skip pain meds and go straight to my baby!

I did not have the vaginal birth I had first hoped for. But I was given options and felt empowered to make my own choices based on what my body was telling me. I am completely happy with how it happened, and my baby is happy, healthy and very calm.